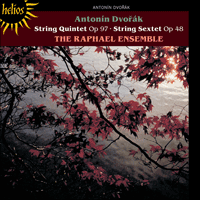 Dvořák’s chamber music is one of the most popular parts of his repertoire and contains some classics of the genre. Thoroughly Romantic, endlessly imaginative and imbued with Slavonic fire, the String Quintet and String Sextet are elegantly performed by the virtuoso musicians of The Raphael Ensemble.

As early as the fourteenth century Bohemia had welcomed such musicians as Machaut at the court of King John. By the sixteenth century a large number of songbooks were published whose popularity spread into the Bohemian border lands of Germany and Hungary, and Prague became the imperial residence of Emperor Rudolf II. The city became an important centre for the outstanding musicians of the day and began to coordinate its musical life with Vienna and the German capitals. By the turn of the eighteenth century a major contribution to Austro-German musical literature had been made by Bohemian composers.

This national orientation found in the nineteenth century two worthy champions—composers whose works form a fitting climax to the establishment of Bohemian national music—Bedřich Smetana and Antonín Dvořák. The former became known as ‘the father of Czech music’ and he drew on the great treasury of Bohemian folksong and dance as a radiant source of inspiration. His compatriot, Dvořák, was much attracted by the noble ideals of Brahms yet sought to maintain the spirit of national consciousness in his work. It is here that the Bohemian national school can be seen to advantage when compared with other national schools, for example the Russian and Scandinavian, that arose at the same time. The Czech musicians effect a natural spontaneity in their idiom which surpasses their contemporaries. It is this particular aspect which illuminates Dvořák’s art, and which endears his music to so wide an audience.

Born within a few miles of Prague, in September 1841, Antonín was the eldest of eight children. He showed no musical precocity and at the age of twelve became apprentice to his father in the butchers’ trade. The family enjoyed little prosperity, however, and when the young man’s musical talents revealed themselves it was Antonín’s uncle who provided the wherewithal for him to enter the Prague Organ School at the age of sixteen.

This further education was sufficient to allow Antonín to gain a foothold in the musical profession as a viola player in a band. The band performed some three times a week in inns and restaurants, an experience that must have been important to the emerging composer, providing as it did close contact with the public.

He was soon to experience a real highlight in his early career when he took part in a concert of Wagner’s music conducted by the great man himself. This was not altogether an unalloyed blessing since the inexperienced young Bohemian found Wagner’s music altogether too powerful an influence on his own writing. Only after timely warnings from Smetana was the struggling composer persuaded to abandon the direction his work was taking. Dvořák now began to write music of true significance and his interest in chamber music became obvious.

Written in a two-week period in May 1878, the String Sextet was composed soon after the enormously successful Slavonic Dances and, in the summer of the following year, it was performed at the Berlin home of Joachim at a soirée in honour of the Czech composer. The reception accorded Dvořák’s music by a distinguished audience was an experience he was long to remember.

Full of spontaneous invention in the manner of Schubert, the Sextet’s themes have been described as ‘flowing with Slavonic blood’. They are delightfully deployed in the course of the first movement and well contrasted, the second subject being in the mediant. There is but a short development section before the recapitulation which is in F sharp instead of the tonic key.

To describe the second movement Dvořák uses the Russian term ‘Dumka’, an indication of the employment of strongly contrasted sections, sometimes very sad and sometimes happy. Over a steady march-like rhythm Dvořák’s asymmetrical phrase structure assists in making this one of the composer’s most interestingly novel movements, incorporating slow gypsy music and a tender lullaby. A return to the rhapsodizing gypsies is made in the coda.

Although called ‘Furiant’, the following movement has none of the characteristic cross-rhythmic effects associated with this type of music. It is a vigorous scherzo which includes in its trio section an allusion to the first Slavonic Dance.

The last movement consists of five variations and stretta on a B minor theme which in truth seem not to have the spontaneity of the accompanying movements. The conclusion of the work is rather too boisterous and perhaps prolongs its leave-taking to its disadvantage.

In September 1892 Dvořák, together with his wife and their eldest son and daughter, arrived in New York to take over the directorship of the National Conservatory of Music in that city. It was a somewhat strange institution in that although it provided excellent teaching it awarded no diplomas, and coloured folk were provided with free tuition whilst others paid only what they could afford. This benevolent policy stemmed from the President of the National Conservatory, the worthy and redoubtable Mrs Jeannette Thurber. It was a policy with which the kindly Dvořák was in complete sympathy.

During his stay in America the Czech composer missed his homeland keenly and was delighted to be invited for a summer vacation to Spillville, a little Czech settlement in Iowa. The settlement, miles from anywhere, became a ‘home from home’ for Dvořák who even played the organ for the settlers at services in their little church. An added delight for the composer was the presence of the rest of his family who joined him for the summer. In this joyful atmosphere were written many of Dvořák’s loveliest works including the famous ‘American’ Quartet, Op 96, and the String Quintet, Op 97, here recorded, which at one time also rejoiced in the soubriquet ‘American’. The Quintet was written between 26 June and 1 August 1893 and first performed at New York’s Carnegie Hall on 24 January of the following year.

During Dvořák’s stay in Spillville the settlement was visited by a group of North American Indians of the Kickapoo tribe, led by Big Moon and his wife, Large Head. They came to sell medicinal herbs and stayed for several days performing their songs and dances to the delight of Dvořák and his hosts.

Exactly how much this experience influenced the composition of the Quintet is conjectural, and could easily be overstated; however, there is little doubt that the composer was fascinated by what he heard and that it had at least some effect on the music he was writing at the time.

The Quintet opens with a solo melody for the extra player, the second viola, but it is another subject which forms the main material for the development section, a melody based on an Indian song Dvořák heard at Spillville. A strangely sad episode featuring the two violas is heard before the shortened recapitulation.

The succeeding scherzo is quite excellent and uses a theme in the trio section reminiscent of one heard in the slow movement of the ‘New World’ Symphony. It is also of similar character to the viola theme which forms the basis for the variations in the Sextet. The third movement, a Larghetto theme and five variations, leaves the exotic atmosphere of Indian music for that of simple devotion. The subject of the variations is half in the major and half in the minor, ingeniously composed. The music returns in the end to the unadorned theme. Whilst the presence of Beethoven may be felt in the variation movement, the Finale’s main theme is noticeably similar to one of Schubert’s in the Finale of the latter’s Trio in E flat, D929, and indeed to a theme of Smetana’s in his G minor Trio. Though interesting to observe, such references to the works of others do nothing to detract from Dvořák’s achievements in this Quintet. His own individual qualities are fully able to withstand any criticism that might be engendered in this connection by those unable to appreciate the true genius of this genial man.