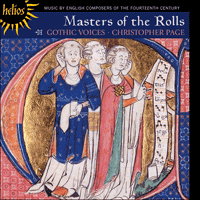 Masters of the Rolls

Music by English composers of the fourteenth century

This recording from Gothic Voices and Christopher Page—acknowledged as one of the finest performances of medieval music of the last twenty years—follows their many Gramophone Award-winning albums and celebrates the anonymous English composers of the fourteenth century.

The combination of Page’s tremendous scholarship, the simple beauty of the singing and the extraordinary freshness of the music is irresistible.

‘There is remarkable beauty in these varied pieces, beauty that is brought out in the superb singing of this ensemble. This is an example of a totally perfect release’ (American Record Guide)
‘One's ear is instantly captivated … this disc comes with unhesitating recommendation, and not only for those to whom medieval music is already a familiar delight. The combination of scholarship and musicianship brought to bear by Page and his singers is wholly admirable; in particular, the ease and grace with which Gothic Voices negotiate the sometimes angular textures of their repertoire is a source of fascination and wonder’ (Gramophone Early Music)
‘Another fascinating exploration of music from the ever-questing and imaginative Christopher Page and his Gothic Voices. There is nothing here that fails to compel. A very attractive prospect for even the most reluctant medieval explorer’ (Classic CD)

Masters of the rolls is the name we have given to the English composers of the fourteenth century, almost all of whom are anonymous. Literate musicians were often called ‘magister’ in the Middle Ages (compare the modern Italian usage of ‘maestro’), and for performance purposes their compositions were often copied out on rolls like those shown on the front illustration of this album. Some of these anonymous masters are perhaps to be found in the texts of ‘musician motets’ like Musicorum collegio/In templo Dei: John Adam, William Oxwick, John Exeter, Nicholas Hungerford, William Tideswell. Even the most expert research has failed to uncover much information about these singers and nothing to connect them with any particular surviving compositions.

The composers of fourteenth-century England exploited two principal types of sound, and almost everything in their technique relates to this fundamental distinction. The first sound is created by having all the voices sing the same text at the same moment. Since the vowels are the same in each voice at any moment, changes in the harmony arising from the counterpoint are dramatized by abrupt and unanimous changes in the harmonics of the sound arising from the vowels. The musical phrases end with a breath in all parts. This regular and concerted respiration contributes to the remarkable sense of poise that pieces such as Ab ora summa nuncius can create in performance. Here and there a composer will vary his pattern; in Missus Gabriel de celis there are several five-beat phrases that are strategically set down amidst the fours (in verse 1 at the words ‘Sacris disserit loquelis’, for example). Pieces like these help us to appreciate the comparative elasticity of the phrases and breathing in a more ambitious work of the same-text kind, such as Letetur celi curia. Here the length of some phrases requires a momentary lilt in the pulse of the music since it may prove impossible (at least with these modern singers at the tempo chosen here) to breathe in time. The effect can be both shapely and declamatory. In all of these same-text pieces, composed cum eadem littera as contemporaries would have said, the harmony is remarkably consonant. Letetur celi curia runs for nearly three-and-a-half minutes here without a single dissonance of a second, seventh or ninth, major or minor; such a procedure is almost unimaginable in the context of Ars Nova practice in France. This piece also shows how the more ambitious composers were sometimes inclined to create a burst of parallel chords, especially of the 6–4 kind ubiquitous in same-text pieces, and to use them as an emphatic or quasi-ornamental passage in the midst of more strictly contrapuntal writing. In Letetur celi curia this happens in verse 1 at ‘regia, Regina regis’ and elsewhere. Compare the last verse of Singularis laudis digna where the composer names the English (‘fit Anglorum’) and then their King, Edward III (‘sit Edwardo’), with a blaze of parallel writing. In the less ambitious pieces such passages of parallelism may be very common, and the fundamental appeal of much English harmony in the fourteenth century is created by chains of 6–4 chords which lack the fifth resolving into a final 8–5 chord. Sample the harmony in the first verse of Ab ora summa nuncius at the words ‘ipsam sic alloquitur’.

In the simpler pieces these techniques, combined with the smooth trochaic movement favoured by English composers, can produce a remarkable effect, and it is no exaggeration for Ernest Sanders to declare that ‘for sense of tonal direction, structural clarity, chordal richness and musical lyricism, these songs are not matched by any other medieval repertory’. In pieces such as Ab ora summa nuncius and Missus Gabriel de celis the movement is light and the tone somehow insouciant, and yet the music retains a gravitas which matches the sacred subject of the text. That sense of gravitas derives partly from the serenity of the Marian texts used in all the same-text pieces on this recording, but it may also owe something to a harmonic language which is predominantly ‘white note’, except at cadences. The exception here is Stella maris illustrans omnia, which brings to its highly unorthodox text (note the reference to the ‘itches of the ring of Venus’ in the last verse) a series of astonishing chromatic experiments.

Most of the same-text pieces are what contemporaries would have regarded as music ‘performed without complex figuration’ (simpliciter prolatus). In contrast, the superbly assured Singularis laudis digna is an example of the same-text sound carried forward with what musicians in fourteenth-century England called copula: ‘a rapid form of discantus in which the semibreves are fractured into minims’ (pseudo Tunstede). Not every composer could manage this florid style without momentary lapses into banter, as Generosa Jesse plantula reveals. The piece has many striking ideas, but is perhaps a little too packed.

The second principal kind of sound which English composers of the fourteenth century cultivate shows the reverse of almost everything said above. This appears in the motets, where the voices sing different texts. In the terminology of contemporaries these are pieces cum diversis litteris. Here the singers breathe at different times (there are no lilting suspensions of the tactus for breath) and the musical phrases overlap. There is now little or no parallelism in the counterpoint and in general there is more ‘black note’ harmony produced by musica ficta adjustments. In addition to lulling Marian texts there are now verses where poets try their hand at something more unusual or demanding: the list of singers performing the weekly Lady Mass in Musicorum collegio/In templo Dei is one example, and the rapturous catalogue of Nature’s bounty under God’s dispensation in Omnis terra/Habenti dabitur is another. In its Motetus text, Habenti dabitur, this motet presents the nearest thing to a completely unintelligible poem that I have so far encountered in medieval song. Praise for the Virgin in these motets is apt to be cast in more ostentatiously learned language than in same-text music; the superbly fluent Pura, placens/Parfundement plure provides a striking example.

To these pieces we have added two thirteenth-century items. Exultemus et letemur is apparently connected with the feast of the boy bishop, may date from around 1200 and belongs in what is very nearly the earliest layer of recoverable polyphonic music sung in England. With O sponsa Dei electa we approach the threshold of the fourteenth century and the materials that were to mature in compositions like Letetur celi curia. Towards the further end of the century lies the canonic Salve regina for three voices. This superbly managed piece leads naturally into the canons of the Old Hall Manuscript around 1410, extending beyond the chronological reach of this recording.

The programme is completed by five monophonic songs that are all connected with the political events of the reign of Edward II. Summum regem honoremus, Copiose caritatis, Sospitati dat egrotos and Pange lingua are taken from the Office for ‘St’ Thomas of Lancaster, the magnate who was beheaded by Edward on 22 March 1322. Thomas was buried at St John’s Priory in Pontefract, and almost immediately a cult developed, centring upon the tomb near the main altar. At the York parliament of 1322, Edward found ‘the whole country’ attesting to the miracles performed at the shrine. He ordered the doors of the Priory to be closed, but almost immediately the cult broke out at St Paul’s in London. Within days of Edward’s deposition, moves were afoot to have Thomas of Lancaster canonized. The Office from which these pieces have been taken was probably composed at about this time. All the texts survive without music, but Pange lingua, Copiose caritatis and Sospitati dat egrotos are contrafacta of familiar chants (the last two being for St Nicholas). Summum regem honoremus proves to be a contrafactum of Summi regis in honore, a chant with strong Hereford connections (Bishop Thomas of Hereford was ‘spiritual father’ to Thomas of Lancaster). The remaining song, Vexilla regni prodeunt, another contrafactum of a familiar Hymn, praises Thomas of Lancaster’s part in the execution of Edward’s widely detested favourite, Piers Gaveston.