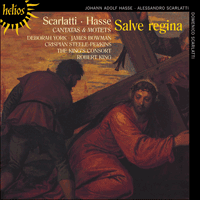 In the eighteenth century the cantata was considered to be the supreme challenge for a composer's artistry. Here are recorded three fine examples from the enormous corpus of such works by Alessandro Scarlatti, two for solo voice with continuo, and one which includes a particularly demanding part for obbligato trumpet, faultlessly played by Crispian Steele-Perkins.

These cantatas are joined by settings of the Salve Regina by Domenico Scarlatti (Alessandro's sixth son) and Johann Adolf Hasse (a pupil). The work by Hasse is distinctly operatic with florid vocal and instrumental lines, and the younger Scarlatti similarly finds himself drawn away from religious deference to a more flamboyant style.

Domenico Scarlatti (1685–1757) Salve regina
The sixth of Alessandro Scarlatti’s ten children, Domenico Scarlatti’s reputation today rests mainly on his enormous output of keyboard music, amounting to some 550 sonatas. Most of his fifteen known operas are lost (and those which survive are rarely heard), as are the majority of his oratorios and cantatas. Domenico’s early compositions, and indeed his whole lifestyle up to the age of thirty-two, were greatly restricted by his father who exercised a quite intolerable degree of interference. It took a legal document in 1717 to free son from domineering father. Most of Domenico’s sacred compositions date from 1713–1719, whilst he was Maestro di Cappella at the Basilica Giulia in Rome and still within this period of parental control.

In his sacred music Domenico showed elements of the harmonic richness and melodic individuality which flood his later keyboard writing, but the main features of his settings of emotive sacred texts are tuneful melodies which mix religious deference with occasional elements of the opera. This readily approachable style is nonetheless underpinned by a sound compositional technique. The fine setting of the Salve regina begins with just such rich harmony and elegance of line, after which comes a dramatic section alternating trumpet-like calls (‘Ad te clamamus’) with more intense grave sections (‘exsules, filii Hevae’). The vocal line returns to more lyrical writing at ‘Eia ergo’, but the upper strings are more playful in their imitation of each other. ‘Nobis post hoc exsilium’ confidently starts with textbook imitation but the mood quietens at ‘ostende’. The most emotive (and individual) writing is reserved for ‘O clemens, o pia’, where Scarlatti’s characteristic use of dissonance and bitter-sweet melody gives rise to music of great beauty before the final ‘Amen’ returns, albeit restrained by its religious context, to a more operatic style.

Alessandro Scarlatti (1660–1725) Cantata Su le sponde del Tebro
Though nowadays the cantata is considered to be a genre second in refinement to opera, during the eighteenth century it was generally regarded as the supreme challenge for a composer’s artistry. With more than six hundred known cantatas for which Alessandro Scarlatti’s authorship is fairly certain, and well over a hundred others of more dubious origins sometimes attributed to him, Scarlatti (if not actually intending to demonstrate the required artistry by sheer volume of composition) certainly established himself as by far the most prolific composer of cantatas of his era.

The majority of Scarlatti’s cantatas are for solo voice, usually with only continuo for accompaniment. However, contemporary trends increasingly moved towards the addition of instrumental accompaniments, and around sixty of Scarlatti’s cantatas use extra instruments. Three appear on this disc. Usually that instrumental backing is of strings, but occasionally his works also require recorders or trumpets. Su le sponde del Tebro contains a particularly demanding part for obbligato trumpet, playing in a high tessitura which suggests that there was a fine player around with the considerable stamina required to play the arias which partner soprano with trumpet. The story is the classically despondent one of unrequited love, and the form the usual alternation of arias and recitatives prefaced by a short sinfonia. The arias with trumpet are steadfast in their sentiments, and there is a brave (and partly successful) attempt to make the ground bass at ‘Dite almeno’ interesting, but it is the dissonances of the meltingly beautiful aria ‘Infelici miei lumi’ which show Scarlatti at his finest.

Johann Adolf Hasse (1699–1783) Salve regina
Hasse’s outstanding popularity in both Italy (where he studied for a time with Alessandro Scarlatti) and Germany as a composer of opera seria was almost unparallelled in the eighteenth century, yet immediately after his death his name sank into obscurity. Fétis observed of Hasse that few composers have been as famous and yet as quickly forgotten. Hasse’s principal employment in his early years was as a tenor with the Hamburg opera, which may in part account for the lyrical style in which he wrote. He seems to have transferred from singing to composition around 1730, when he travelled to Italy and eventually settled in Naples for six years. His operas became extremely popular with Italian audiences while his arias were thought to be excellent vehicles for vocal displays. Hasse also maintained a great following in the opera at Dresden and eventually his work was much acclaimed in Vienna. Handel too admired Hasse’s music, arranging it for performance in London concerts.

Amongst a huge compositional output there are at least thirteen settings of the Salve regina attributed to Hasse. The most famous of these is in A major and was published in London in 1740, but the one recorded here is a later, unpublished version dated 1744. Its style is distinctly operatic, mixing an attractive simplicity of melody with florid instrumental and vocal lines which are always eminently suited to the voice. Gesture too is often to the fore, and the score is liberally sprinkled with changes of dynamics, often pianos interspersed with sudden fortes. The first movement is elegantly melodic, with expressive, melismatic vocal phrases set over an attractive orchestral accompaniment which is reminiscent of Pergolesi. Equally effective is ‘Ad te clamamus’ where detailed string figurations are overseen by a glorious vocal line. The more forthright Allegro setting of ‘Eia ergo advocata’ tests the soloist’s virtuosity with rapid runs. The final movement, ‘Et Jesum, benedictum’, returns to the cantabile vocal style and demonstrates why the diarist Burney described Hasse as ‘the most natural, elegant, and judicious composer of vocal music’.

Alessandro Scarlatti Cantata Infirmata vulnerata
Like Su le sponde del Tebro, Infirmata vulnerata centres around a text on the common theme of unrequited love, but on this occasion optimism is allowed to creep in as the cantata progresses. Scarlatti’s manuscript dates the composition to October 1702 and, accompanied by two violins, takes a mournful angle at the opening. The first aria is set over a walking bass, above which the violins alternate lachrymose suspensions with more conversational dialogue, whilst the voice rarely rises above despair. ‘Vulnera percute’ is as rich in its harmony as its sentiments are tormented, and leads without an intervening recitative into a curious ground bass, seven bars in length. The last aria is upbeat, with shorter phrases passed between singer and instrumentalists: our lover sees hope triumphing.

Alessandro Scarlatti Cantata O di Betlemme altera
Alessandro Scarlatti’s fine Christmas cantata O di Betlemme altera may have been the result of a commission from an Italian noble, for there seems to have been a tradition, led by the Pope, of ecclesiastical households commissioning ‘a virtuous entertainment in music … a cantata in Italian about the Nativity of the Child Jesus’. This work would have been performed as a prelude to ‘a most abundant supper’, which was served between first Vespers of the Nativity and Midnight Mass on Christmas Eve. Scarlatti’s graceful cantata starts in traditional form with an elegant Introduzione whose second section introduces pastoral, Christmas bagpipe drones, much in the style of Corelli’s Christmas Concerto, the ‘pifa’ of Handel’s Messiah and Part 2 of Bach’s Christmas Oratorio. After an introductory recitative comes a jaunty aria, ‘Dal bel seno’, full of opportunities on its da capo for the soloist to show her skill at ornamentation. The second aria, ‘L’autor d’ogni mio bene’, is glorious, with solo violin and viola accompanied by ‘Violoncello e Leuto’ (playing in an especially high tessitura) providing a shimmering, atmospheric accompaniment to a delicious melody. The final movement completes the delightfully pastoral scene, with a lilting melody accompanied by orchestral drones. Here is one of the most charming of all baroque representations of the shepherds at the manger, worshipping the little baby Jesus.