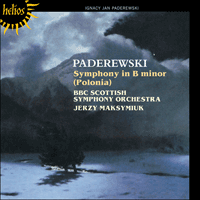 Symphony in B minor 'Polonia'

Paderewski's sole symphonic essay, completed in 1909, is one of his last works, completed before taking up the political career which culminated in his becoming Poland's Prime Minister. The Symphony is an archetypal late-Romantic specimen, strongly nationalistic in intent and expression. It's a big work in three movements, over 70 minutes in duration, and this is the first complete Western recording of it. (An earlier one available many years ago on LP was drastically cut.) The language is sombre and intense, the sonorities individual. (Paderewski asks for three sarrusophones in the first movement; they were somewhat difficult to assemble for the recording!)

‘A performance of eloquence and dashing commitment. The recording is resplendent’ (Gramophone)
‘A stupendous undertaking by all concerned, a committed and fervent account with truly prodigious playing by the Scots and sound that simply beggars description’ (American Record Guide)
‘Utterly original and well worth investigation’ (The Sunday Times)
‘The work can be confidently recommended to all those who are drawn to the more extravagant byways of the late-Romantic orchestral repertoire’ (Classic CD)

Ignacy Jan Paderewski (1860–1941) had a career unlike any musician since Liszt. Not only was he lionized worldwide as a pianist, he was also a composer of some distinction. Furthermore, his strong patriotic sensibilities led to his appointment in 1919 as the first Prime Minister of newly independent Poland. His country had been under foreign occupation and partition by Austria, Prussia and Russia since the 1790s and as a consequence its native culture had been at best sidelined, at worst ruthlessly suppressed. Nevertheless, Paderewski was able in 1910 to unveil a monument in Kraków (for which he had provided the funding) to commemorate the five hundredth anniversary of one of Poland’s greatest military victories, the Battle of Grunwald against the Teutonic Order. His public profile became even more prominent at the outbreak of the First World War, when he not only concertized widely in America to raise money for Poland but also organized the Polish Victims Relief Fund in Britain. Co-opted onto the committee was Edward Elgar, who subsequently wrote a symphonic prelude, Polonia (1915), which he dedicated to Paderewski. It concludes with a rousing orchestration of Poland’s national anthem—Jeszcze Polska nie zginela (‘Poland will not perish’).

Paderewski’s extra-musical activities did not spring from nowhere. They had been prefaced by the composition of his last substantial work, the Symphony (1903–1908) recorded here. It too referred to the Polish national anthem, but more obliquely than with the Elgar, and was also called Polonia. It appears likely that this title was borrowed from a series of eight ‘cartoons’ by Artur Grottger (1837–1867), whose work portrayed the realism of everyday life and struggle under Russian occupation. His Polonia (published in 1863), with individual pictures called ‘Forging the Scythes’ or ‘After the Enemy has Withdrawn’, was an immediate response to the failed insurrection of 1863/4, known as the January Rising. And when, on the fortieth anniversary of the Rising, Paderewski took a year’s sabbatical from the concert platform in order to compose, one of the works which he began was the Symphony. The original sketches were made in 1903 at his Swiss home near Morges, but the final score was not completed until 1908. It was given a private performance in Lausanne on 26 December 1908 before its public premiere, in Boston on 12 February 1909, by the Boston Symphony Orchestra conducted by Max Fiedler. European performances soon followed: Hans Richter conducted it in London and André Messager gave the French premiere in Paris. The Polish premiere took place in Warsaw in January 1911.

In the nineteenth century, Polish symphonies were thin on the ground. Given its geographical and political status, Poland’s culture often looked eastwards. Opera, song and orchestral programme music were favoured genres rather than symphonies, concertos or quartets. Paderewski would have been familiar with the music by fellow Polish composers, such as Wladyslaw Zelenski (1837–1921) and Zygmunt Noskowski (1846–1909), as well as with the younger generation of Mieczyslaw Karlowicz (1876–1909) and Karol Szymanowski (1882–1937). Their musical outlook at the turn of the century was based on the examples of Mendelssohn, Liszt and Tchaikovsky, as well as recent trends in German music.

Paderewski matched their turn-of-the-century interest primarily in the Slavonic rather than the Germanic traditions when planning his Symphony. It is an expansive work (and would have been even larger had he fulfilled his original intention of including a scherzo) which is unconcerned with taut symphonic structures, preferring to follow the Lisztian example. The same features may be found in Paderewski’s other large-scale pieces, the Piano Concerto (1888), the Polish Fantasy for piano and orchestra (1903) and the Piano Sonata (1903). This recording is the first to be made outside Poland of the complete Symphony: until recently it was usually performed in a cut version which took chunks out of the first movement and finale in particular.

The Symphony’s forbears include Liszt’s two symphonies alongside Tchaikovsky’s Second and ‘Manfred’. This is partly because of the broad canvas on which the Symphony is drawn but also because each movement, without being overtly programmatic, has the feel of a late-romantic symphonic poem. The opening movement begins with a slow introduction whose style is coincidentally reminiscent of both Sibelius and Rachmaninov, two other composers with strong links to the Liszt–Tchaikovsky tradition. It contains not only an initial descending phrase which anticipates the ensuing Allegro vivace and foreshadows the main theme of the finale but also a brief, unsettled theme on the cellos (beginning with a rising semitone followed by a descending tritone) which is the main idea of the Allegro vivace.

The Slavic introspection of the opening gives way to the restless, fighting spirit of the Allegro. Sometimes this reaches an almost Elgarian intensity and quasi-martial triumphalism. But, in the same way that Polish history is littered with valiant uprisings and violent suppressions, the euphoria is short-lived and the opening Adagio returns. The return of the Allegro initiates the main body of the movement, in which the recapitulation is prefaced by sombre low chords on the brass (including three sarrusophones) which achieve their full force only in the finale. The several stages of the coda include a solo appearance of the organ, fulfilling a similar transcendental function to its counterpart in Tchaikovsky’s ‘Manfred’ Symphony, although unexpectedly not at the culmination of the whole work but at that of the first movement.

The Andante con moto also has a dark, lyrical tone (the theme emerging from bass clarinet into the clarinet is characteristic), although the fevered yearning of the first movement is now more elegiac. Paderewski’s skilful exploitation of the sometimes elusive 9/8 metre allows the surging music to ebb and flow compellingly (again, Rachmaninov is called to mind, as in his slightly later symphonic poem The Isle of the Dead).

In previous pieces, Paderewski’s music had often referred to Polish folk traditions, including the mazurka and krakowiak. The finale of the Symphony has a more indirect citation, but one which in symbolic terms was infinitely more significant. Out of the initial flourishes, snatches of the main theme start to appear. It assumes fuller form, after some four minutes, on the oboe and then the clarinet. Its descending stepwise motif, hinted at in the first movement, is prefaced by a little rising upbeat, but its character is so ubiquitous that non-Poles would be forgiven for not recognizing its significance. In fact, it is a subtly veiled reworking of the opening two bars of the Polish national anthem, Jeszcze Polska nie zginela, here in duple metre rather than the original’s triple-time mazurka. As a rallying cry, it is subdued, but its all-pervasive qualities are highly effective. Even so, it is bittersweet. On the one hand it was a source of encouragement to Polish listeners; on the other, its unavoidable disguise was a signal of powerlessness in the face of continuing national subjugation.

Yet the movement is resolutely upbeat and has time early on for a brief allusion to the krakowiak dance. Battle is joined with the forces of evil, personified by the low brass chords heard in the opening Allegro vivace. There is also the sound of the tonitruon, Paderewski’s own version of the thunder sheet. The substantial development section is brought to a halt by growling strings, low wind chords and percussion.

The peace and sweetness of the ensuing Andantino ma non troppo deny the brute force of these chords, and the music moves on through a military march (again incorporating the motif from the Polish national anthem) to a second island of tranquillity. This is a prelude to the reappearance, on cor anglais, of the main theme from the first movement. Both ideas are then combined as the finale gathers pace for the recapitulation. An almost Wagnerian exultation fills the final minutes as the coda races away to a victorious conclusion.