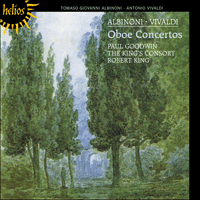 ‘Delightful’ (BBC Music Magazine Top 1000 CDs Guide)
‘Delightful … played with vivacity and finesse’ (Gramophone)
‘What a breath of fresh air! Played as they should be and never have been 'til now. This recording is a complete delight, a small pattering of allegros and adagios that purr as happily as a spring rain’ (The Magic Flute, USA)

Born in Venice in 1671, Tomaso Albinoni was the eldest son of a wealthy paper merchant who owned several shops in Venice. It is not known who Albinoni’s teachers were—though Legrenzi’s name has been suggested—but we do know that Tomaso took both violin and singing lessons. With his inherited family wealth, Albinoni found no need to take a musical job in the church or at court: his independent means enabled him to remain a dilettante. His intentions were, however, quite clearly to devote himself to music, for on his father’s death he effectively relinquished managerial control of the family business, though he continued for a short while to receive a share of the profits. In 1721 the business was taken over, after a lawsuit, by an old creditor of his father, and Albinoni’s private income all but ceased.

Albinoni first came to prominence as a composer in 1694 in the opera house, where his melodic style proved highly popular. Over the next forty-seven years he wrote more than fifty operas, along with some thirty cantatas, around sixty sonatas and at least sixty concertos. Although some of Albinoni’s music has been criticized as lacking in harmonic finesse, he was undoubtedly a remarkable melodist and, perhaps due to his rather isolated lifestyle, a highly individual composer. Nowhere is this individuality more noticeable than in the twelve concertos, opus 9, first published in Amsterdam by Le Cene in 1722. Albinoni divided the concertos into three different types of ensemble: four concertos are for two oboes and strings, four are for solo oboe, and four feature a solo violin. All twelve follow the three-movement pattern, but they differ from earlier concertos in being extended in proportions, notably in their slow movements which are especially expressive.

The concerto in G for two oboes (Op 9 No 6) is a particularly fine piece whose energetic first movement ritornello is thrown between the oboes and the upper string parts, whilst in the episodes the two soloists have more lyrical passages. The slow movement is one of Albinoni’s finest, full of rich harmonic sequences and suspensions. In the concluding dance-like Allegro, Albinoni presents a variety of textures, giving the bass line to the viola and writing lines for the violins which are equally as virtuosic as those for the two soloists.

The concerto in C major for two oboes (Op 9 No 9) is based around an arpeggiated figure, first heard in unison in the strings, and once again shows Albinoni’s gift as a melodist. The slow second movement is full of suspensions, made all the more telling by the use of the rich six-part texture. The concluding Allegro, too, is built on an arpeggio, and provides the accompanying strings with at least as much to play as the soloists.

With the concerto in D minor for oboe and strings (Op 9 No 2) we have Albinoni’s best solo concerto. After an energetic first movement, characterized by dotted rhythms, comes a ravishing slow movement. Accompanied by repeated chords in the lower strings and a harp-like configuration in the first violin, the soloist has a soaring line: here is Albinoni at his most appealingly melodic. The concluding movement keeps both soloist and orchestra busy with an imitative arpeggiated figure and plenty of counterpoint.

With the Concerto in C for trumpet, three oboes, bassoon and continuo we have an unusual work. There is no information concerning the occasion for which this concerto might have been written, but we can guess that it was probably for an outdoor occasion, where a solo trumpeter and the local oboe band might have lent musical colour to a festive occasion. Certainly the trumpeter must have been a good player, but Albinoni gives equally demanding solo ‘breaks’ to the first oboe and the obbligato bassoon. No one would suggest that this is music of greatness—though it is certainly tuneful—but it presents an unusual and fascinating tone colour.

If Albinoni’s catalogue of concertos appears to be large, Antonio Vivaldi’s collection of at least 500 is extraordinary, with 350 concertos for solo instruments, and a further 150 written for two or more players. If Vivaldi did not actually invent ritornello form, he was certainly the first composer who utilized it regularly in the outer movements of his concertos, and he was one of the first to standardize the three-movement form.

Of Vivaldi’s 350 extant solo concertos, 230 are for violin, a number explained, in part at least, by his appointment in 1703 as Maestro di violino at the Ospedale della Pietà, one of Venice’s four musical orphanages. The musical reputation of the Pietà was high, and services there, often seeming more like concerts than devotions, were a major event in the social calendars of Venetian nobility and foreign visitors. Vivaldi’s post required not only the teaching of the violin, but also a constant supply of new works for his pupils. By the time he lost his post in 1709 (most probably not, contrary to popular myth, through misconduct but because of economic factors) his reputation as a composer was rising: it was effectively sealed by the publication in 1711 of the twelve extraordinary violin concertos contained in L’estro armonico. Vivaldi was restored to his post at the Pietà in 1711, and reappointed annually until 1716, albeit against mounting opposition, when he was once again dismissed. Almost immediately, and certainly surprisingly, he was promoted to the important post of Maestro de’ concerti. Although Vivaldi had been writing a wider variety of works for the Pietà during the previous five years than his post required, it seems likely that this new appointment would have been a catalyst for a greater variety of concertos, especially those written for more unusual combinations of instruments.

Alongside the 230 solo violin concertos, we find 39 concertos for bassoon, 27 for cello, 20 for oboe and at least 16 for flute. Amongst those for matched pairs of instruments there are 25 concertos for two violins, and also works for pairs of cellos, oboes, flutes, mandolins, trumpets and horns. In the multiple concertos there are some unusual combinations of sounds which give us evidence of the wide variety of instruments the girls of the Pietà played: the standard of musical achievement must have been extraordinarily high.

Vivaldi wrote two concertos, both in C major, for pairs of oboes and the newly invented baroque clarinet. The first reference we can find for this instrument is an order for a pair of clarinets from the Nuremburg maker Jacob Denner in 1710. The early history of the clarinet is sometimes confused with that of the chalumeau. The chalumeau basically played in a lower register than the baroque clarinet: Vivaldi’s writing expects the clarinet to play up to high C, proving which instrument he intended to be used.

Both the concertos in C, RV559 and RV560, begin with a slow introduction before breaking into an energetic Allegro. Vivaldi treats the solo instruments as opposite pairs, echoing and imitating each other, and also as a concertino group, contrasting and combining with the string section. Alongside their lyrical qualities Vivaldi also utilizes the trumpet-like quality which both instruments are able to produce to suitably celebratory effect. The pastoral slow movement of RV559 is scored just for the four wind instruments, omitting even the continuo line: the slow movement of RV560 omits the clarinets and gives the strings a simple unison line over which the two oboes weave an elegant melody. Both concertos conclude with triumphant fast movements, with particularly fine harmonic progressions in the middle section of RV559.

With the oboe concerto in F major, RV455, we find Vivaldi in highly individual vein: if there really was evidence needed to scotch the old story that he wrote the same concerto six hundred times, this would be proof enough! After the dramatic opening orchestral ritornello, full of sweeping and grand gestures, the soloist takes over, and we find extraordinary writing, both melodic and harmonic. The slow movement is pastoral, with much of the accompaniment given over to the upper strings. The concluding Allegro molto is in ritornello form with the orchestral ritornelli set amongst the soloist’s increasingly virtuosic episodes.