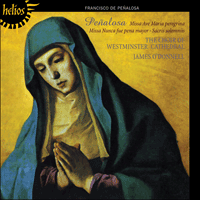 ‘One of the best choirs in the world. Unmissable’ (Gramophone)
‘A timely and revealing disc … glorious and radiant sound’ (BBC Music Magazine)
‘The exquisite performances under O'Donnell present the music to best advantage, given the masterly accomplishments of this choir’ (Fanfare, USA)

Francisco de Peñalosa was born probably in 1470 and almost certainly at Talavera de la Reina, near Madrid. He was undoubtedly fortunate that his career as a composer and singer coincided with the beginning of Spain’s Golden Age: it spanned the time of the conquest of Granada and the final expulsion of the Moors, the discovery of the New World, the unification of the Spanish kingdoms of Castile and Aragon under the Catholic Monarchs Ferdinand and Isabella, and the consequent beginnings of Spain’s rapid rise to the position of dominant world power in the sixteenth century. In music, under the pervasive influence of the international ‘Flemish’ style, Spanish composers of real quality and character began to emerge in the new and favourable artistic and social conditions. As a composer, Peñalosa was the most important figure in this, the generation before Morales.

The earliest extant document referring to Peñalosa is dated 11 May 1498 when he was accepted as a singer in the Chapel of Ferdinand V of Aragon. Later, in 1511, he was also appointed maestro de música in the household of Ferdinand’s grandson, although still remaining with Ferdinand until his death in 1516. His long association with the cathedral at Seville began through the gift of a ‘benefice canonry’ in 1505/6, to which he succeeded despite the opposition of the cathedral Chapter. This was to cause intermittent trouble due to prolonged absences, especially when Peñalosa was in Rome from 1517 probably until 1525 (although he had been in Seville briefly after the death of Ferdinand). The Seville Chapter protested at his absence, despite requests for tolerance even from the Pope: ‘Among the singers in our chapel on solemn occasions is our beloved son, Francisco de Peñalosa … musician extraordinary [who] displays such exquisite art … that we fervently desire his continuing presence.’ When he returned to Seville in 1525 he became Cathedral Treasurer, a position he held until his death in 1528. He lies buried close to Guerrero in the chapel of La Virgen de la Antigua in Seville Cathedral.

Peñalosa’s religious music includes all the standard forms of the time—probably he had an active composing career of about twenty years, producing music for use in the Aragonese court. His sojourn in Rome seems to have been solely as a singer. None of his music is preserved there (in contrast with music by lesser contemporaries such as Illanas and Escribano) and the greater part of his works are preserved in manuscripts which can be associated with the Aragonese Royal Chapel.

While incorporating a wide variety of compositional techniques, Peñalosa’s music is in general less complex than much written by his Franco-Flemish contemporaries. Striking stylistic features common in the music of composers such as Nicholas Champion, Pierre de La Rue, Marbrianus de Orto, Alexander Agricola, who were in Spain with the chapel of Philip the Fair in 1501/3 or 1505/6—for example, ostinato, imitation, cambiata figurations, canon—are all present, yet the music almost always remains simpler, more austere, perhaps much more influenced by the music of Josquin Des Prez, who was to remain the most famous and highly regarded foreign composer in Spain throughout the sixteenth century. Nowhere is it possible to find an equivalent to the boisterous rhythmic multiplications of the cadential drive that closes the second Kyrie of Nicholas Champion’s Missa supra Maria Magdalena (copied in a Toledo choirbook), or of the complex mensuration canons of Pierre de La Rue’s Missa L’Homme armé. Yet Peñalosa’s cadential passages (for example, his setting of ‘Amen’), in the Masses no less than in the motets, shows an endless variety and fertility of imagination. His expressive purpose, shown to the greatest degree in the striking simplicity and, at the same time, in the great variety of texture and figuration in the motets, where the response to the various texts might be expected to yield such results, is demonstrated no less in the more abstract genre of the Mass. Indeed, Peñalosa’s music has a strength of character and individuality unmistakably its own, no matter what it shares with others in a common musical language or technique.

Peñalosa’s Masses are based mainly on secular models, a not uncommon occurrence throughout Europe at the time. The six (complete) Masses by Peñalosa which have come down to us are the (obligatory!) Missa L’Homme armé, the Missa Por la mar (which partially quotes the L’Homme armé tune in the Sanctus), the Missa Adieu mes amours, the Missa El Ojo, the Missa Nunca fue pena mayor, and finally the Missa Ave Maria peregrina, the only chant-based Mass.

It is not known if any of the Masses were written for any specific occasion. However, there is no Benedictus copied in the only source for the Missa Nunca fue pena mayor: with only one Agnus Dei (compared to the standard two of the other Masses and the three of the Missa El Ojo), which nevertheless seems textually complete, and a particularly brief Hosanna, it may be that this is intentionally a ‘short’ Mass.

In the Missa Ave Maria peregrina, mainly for four voices, Peñalosa incorporates sections of the plainchant Ave Maria. However, in addition he uses long sections of Salve regina: beginning in Sanctus and Hosanna, the tenor sings the chant melody associated with the words ‘Spes nostra’ and ‘Illos tuos misericordes’. As a final tour de force Peñalosa constructs the climactic five-voice Agnus Dei around a secular tune, that of the Hayne chanson De tous biens plaine (there being an obvious symbolic significance of a love song in a Mass to the Virgin), in cancrizans canon against the section of the Salve regina beginning at the ‘Vita dulcedo’ verse, all the while surrounding the two structural voices with flowing counterpoints of his own invention.

The four-voice Missa Nunca fue pena mayor uses material from the three-voice villancico of the same name by the Flemish composer Urrede (Johannes Wreede, of Bruges), who was appointed as singer and maestro to the Aragonese Chapel on the 27 June 1477. He had previously been in the service of the first Duke of Alba, García Alvárez de Toledo, the author of the words for Nunca fue pena mayor. This piece has pride of place in the Cancionero Musical de Palacio, appearing at the head of that great manuscript collection of late fifteenth-century Spanish secular music. It became widely known throughout Europe, in marked contrast to other Spanish repertoire of the time. It was even printed (with an additional fourth part) in Petrucci’s Harmonice Musices Odhecaton A, published in Venice in 1501. This was the earliest printed collection of part music (in fact apparently compiled by a Castilian, Petrus Castellanus!).

Indeed, Peñalosa was not the only composer to use this song, as Pierre de La Rue’s Mass of the same name appeared in Petrucci’s Misse Petri de la Rue in 1503. As he had been, since 1492, in the service of Philip the Fair, and married in 1497, to Juana, daughter of Ferdinand and Isabella, Pierre de La Rue would have had a notable Spanish connection even before his first trip to Spain in 1501/3. The sources for this Mass (and its publication in 1503) probably indicate that it was written prior to 1501. Might it have been specially composed in commemoration of these royal events? For Peñalosa’s Mass we have even less grounds for conjecture, but in style it is perhaps the most ‘Flemish’ of his Masses and as such it could well have been a Spanish composer’s response to foreign competition!

Another Flemish contemporary, Matthaeus Pipelare, quoted the tenor of Nunca fue pena mayor in his Memorare Mater Christi, a Hymnus de septem doloribus dulcissimae Mariae Virginis. The latter piece sings of the seven sorrows of the Virgin, with the third voice of the seven being the tenor of Nunca fue pena mayor (the text of which sings of the pain of love, beginning with ‘Never was there greater pain’), and its use has an obvious symbolic intent. So with Peñalosa, the use of the villancico as a model may also be a tribute to the Virgin, though less obviously so than with the Ave Maria and Salve regina chants in the Missa Ave Maria peregrina.

The melody of the Urrede villancico is quoted exactly by Peñalosa in various places in the Mass, for example, in Kyrie I, where the first half of the tune is sung in the uppermost voice. Elsewhere, sometimes it appears in augmented note values (but otherwise unaltered), notated as a mensuration canon, as in Gloria, apparently combined with sections of the plainchant Gloria XV, which begins at ‘et in terra’ with the same rising melodic configuration. The complete melody of Part 2 of the villancico is quoted in the bass, beginning at the triple-time ‘Cum Sancto Spiritu’. In Sanctus, only the first part of the tune is quoted, in the topmost voice, but according to the canonic indication: Prima ut iacet; secunda in dupplo (‘the first time as it stands; the second with double values’). Meanwhile the other voices interweave their own increasingly fragmentary sequential ostinato counterpoints, combining in one of Peñalosa’s most strange and striking textures.

Not only does Peñalosa quote the melody (the top voice) of Urrede’s composition, but he uses from time to time the tenor (middle voice of the original three-part version of the villancico): Part 1 is sung by the tenor in the second Kyrie, and in the Agnus Dei, most notably, the same section is sung in long note values by the alto. No quotation of the full polyphonic texture of the villancico appears in the Mass.

Only one polyphonic verse of Peñalosa’s Corpus Christi Hymn Sacris solemniis survives—perhaps only one was ever written. In this recording, Bruno Turner’s reconstruction is used, so that for the complete Hymn Peñalosa’s polyphony alternates with the popular melody that was used in Spain from the fifteenth to the nineteenth century. The Toledo books (1515) and almost all others for over four hundred years give the tune in black breves and semibreves. The polyphony incorporates this melody in its texture in a slower time, surrounding it with lively counterpoint. For the technically minded, the tune’s original black brevis is the equivalent of the white semibrevis of the polyphony, thus this same tune, when embedded in the polyphony, is slowed threefold.