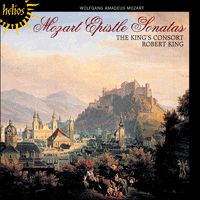 ‘Cannot fail to delight’ (BBC Music Magazine)
‘An hour's delightful listening. Warmly recommended’ (CDReview)
‘Not to be missed. Buy it at once!’ (Musical Opinion)

Mozart had held an honorary position at the court of the Prince-Archbishop of Salzburg since 1769 but, with the death of Count Schrattenbach (who had shown great tolerance in allowing Mozart and his father Leopold prolonged periods of absence) the new Prince-Archbishop Hieronimus Franz von Paula, Count Colloredo, gave Wolfgang a formal, salaried post. (Mozart had been trying, unsuccessfully, to secure an appointment with Archduke Ferdinand, prompting Ferdinand’s mother to write to her son that the Mozarts’ habit of ‘going around the world like beggars’ would degrade his service!) The sixteen-year-old Wolfgang’s appointment as Konzertmeister to the Archbishop in July 1772 brought on a flurry of composition: eight symphonies, four divertimentos and some substantial sacred works. Also included during that year were the first three ‘Epistle’ or ‘Church’ Sonatas.

An integral part of the music for Mass was a short instrumental piece to fill the gap between the readings of the Epistle and the Gospel. Although Archbishop Colloredo had, for his day, an austere view on music for worship, the procession and general stage-management prior to the reading of the Gospel would still have necessitated several minutes of music to fill the gap. Usually this would have been a piece of music which Mozart would have improvised on the organ himself, but for certain occasions when an instrumental ensemble or an orchestra were present, Mozart would write an ‘Epistle Sonata’.

Surviving from between 1772 and 1780 are seventeen of these sonatas which, besides their considerable musical worth, give an intriguing insight into Mozart’s compositional development. Immediately apparent, certainly from the earlier examples, is Mozart’s lack of any sharp distinction in attitude between sacred and secular music, for the works have an airy, tuneful style which would have been as suitable to the Court as to the Church. Despite the limitations of length with which the form was saddled—Mozart wrote in 1776 to Padre Martini that ‘a Mass, with the whole Kyrie, the Gloria, the Credo, the Epistle Sonata, the Offertory or Motet, the Sanctus and the Agnus, must last no more than three-quarters of an hour’—we can see marked developments over the course of these eight years. The majority of the sonatas are scored for two violins, cello and organ continuo. But over the eight years the sonatas increase in complexity of structure, and we can watch the function of the organ develop from that of pure continuo, via an obbligato accompaniment, into (by K336) a full-blown solo role (Mozart held the instrument in high regard, writing that ‘to my mind and ears, the organ is the king of all instruments’). Three of the later sonatas are scored for much larger orchestra, including violins, basso continuo, organ solo, oboes, horns, trumpet and timpani. It would be fascinating if scholars were definitely able to link performances of these works to the composition of specific Masses.

Of the three sonatas thought to date from 1772, it is K67 which is the most interesting, for it has the saddest mood of all the Epistle Sonatas (and E flat major is the most ‘extreme’ key which Mozart uses among the seventeen). But this introspective mood was unusual, and K69 (in the brighter key of D) is extrovert from its opening five triple-stopped chords, although the delightful second subject is more lyrical. K68 has a more studied, academic feel to it, with its close imitation of the second subject and careful development. 1774 finds two more sonatas, the businesslike K144 in D, and the charming K145 in F. Might this latter sonata have been performed at the same time as the Missa brevis in F? Key and year fit, and so does the scoring when we realize that the inclusion of trumpets into the Mass was a later addition by Mozart.

The first sonata to bear a definite date written by Mozart is K212 in B flat, written in July 1775. In its thematic working and harmonic language it is not hard to see that this is a work written by a composer with over thirty symphonies already to his name. K241 in G, from January of the next year, also bears a date in Mozart’s hand, and has a dramatic ten bars at the start of the short development section, though the throwaway ending quickly returns us to a less serious mood. The two dated sonatas which survive from April 1776 are the first sonatas to have fully written-out obbligato parts for the organ. Both K244 in F and K245 in D are notable for their development sections, where the composer’s extraordinary grasp of harmony and modulation comes to the fore. The sonata in D has six bars of particularly anguished, minor development at the mid-point before a link returns us to the opening unison subject.

The Sonatas K224 in F and K225 in A are the most difficult to date, with estimates varying from between 1776 up to early 1780. The light-hearted K224 is full of character and adventure, with delightful mood changes, and gives the second violin a prominent role. The busy K225 too is full of action for the second violin, and represents Mozart’s furthest exploration of the sharp keys. December 1776 saw the composition of two Masses in C, given titles of the ‘Spaur’ and the ‘Organ solo’ Mass, and also the first of the Sonatas scored for larger forces. K263 in C, like these two Masses, is scored for two violins, bassi, organ solo and a pair of trumpets, and, with this enlarged scoring, is music which reaches nearer to that of a symphonic movement. Thus the Epistle Sonatas begin to break new ground. But the old lyrical tradition returns in 1777 for K274 in G, albeit with more complex writing for the second violin, and adventurous harmony.

With the sonata K278 in C, we find Mozart at his most thrilling. The congregation at Mass in April 1777 must have been thrown out of their seats by the sheer force of this sonata. Would that we knew what Mass setting (perhaps scored for the same orchestra of two violins, bassi, organ, oboes, trumpets and timpani?) prompted the twenty-two-year old Mozart to write this composition. Certainly, if the Archbishop and his congregation were not previously aware, they would finally have realized that here was a composer of genius: this sonata is awe-inspiring music of symphonic drama!

Next we next come to K329, also in C, which dates probably from March 1779. The Coronation Mass was dated March 23, and it would be reasonable to assume that this sonata was written for the same service, for it shares the same key and large-scale orchestration as the Mass. In between majestic tuttis Mozart throws the first subject between violins, oboes and solo organ, creating contrast with a light-hearted second subject before a mysterious development. But the grandeur of the occasion returns, for the coda is suitably expansive, with busy string-writing and fanfares for the brass.

Although it returns to the earlier scoring of two violins, cello and solo organ, K328 continues the expansion of the sonatas both in its complex part-writing and also by being the longest of all the sonatas. The organ part too is prominent, venturing away from the continuo line for brief moments and independently holding the pedal points. But this solo line pales into insignificance once we come to the last sonata, K336, written in March 1780 (the same time as the Missa solemnis?). Mozart must surely have written the dazzling solo part for himself, leaving an assistant to play the continuo line on a second instrument (a device we have followed on this recording). The influence of the early piano concertos is clear, and the accompanying instruments (for they are relegated to this function) are entirely subservient to the soloist: indeed they are silenced at the unnotated cadenza just before the end. Once again Mozart had broken new ground: if the lure of Vienna had not spelled the end of the Epistle Sonatas, what would he have done next?