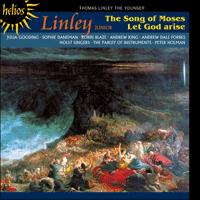 Thomas Linley was born in Bath into a highly musical family. Had he not died tragically young in a boating accident it seems likely that he would have won for himself a far greater name. He travelled widely, was a friend of Mozart (who commented that 'had he lived, he would have been one of the greatest ornaments of the musical world'), and was widely mourned.

The Song of Moses was one of his last works. A grand oratorio in Handelian style, it contains a varied range of arias alongside choruses which are at once expertly written and intensely dramatic (something here developed to the full by the Holst Singers). The story is taken from Exodus (Chapter 15) and concentrates on the Israelites' rejoicing after the Red Sea was closed over the pursuing Egyptian forces—much the same as Handel's Israel in Egypt. This recording is the work's first performance since 1778.

Let God arise is an earlier work, one of his first surviving compositions of any size, and is a large-scale anthem after the style of Handel or Boyce. Again the choruses have real strength and contrapuntal power, and the arias show a skill rare in one so young.

‘One of the best finds yet in Hyperion's English Orpheus series’ (Gramophone)
‘Another indispensable release in the English Orpheus series. The adventurous will find their curiosity amply rewarded’ (Classic CD)
‘Linley might well have been an English answer to Mozart, as this fine short oratorio shows’ (Daily Mail)

Thomas Linley was born in Bath on 7 May 1756, the son of a harpsichordist, composer and singing teacher. Thomas Linley senior played a prominent role in Bath’s musical life and introduced members of his prodigiously talented family to the public at an early age. Elizabeth Ann (b1754), Mary (b1758) and Maria (b1763) were accomplished singers and actresses in their early teens, while Samuel (b1760) was a talented oboist before becoming a sailor. Tom was playing violin concertos at the age of seven, and was an experienced composer before he went to Italy to study with Nardini, where he met Mozart, his exact contemporary. He returned to England in 1771 and quickly became a leading figure in London’s musical life, helped by his father’s appointments as leader of the Drury Lane orchestra (1773) and musical director of the theatre (1774).

Tom wrote some remarkable music over the next few years, including the Lyric Ode on the Fairies, Aerial Beings and Witches of Shakespeare (recorded on Helios CDH55253), a violin concerto (recorded on Helios CDH55260), music for Sheridan’s play The Duenna, and music for Shakespeare’s The Tempest (recorded on Helios CDH55256). Not surprisingly, his death in a boating accident on 5 August 1778 came as a considerable shock to English musicians. As The Morning Chronicle put it: ‘This accident has deprived the profession to which he belonged of one of its principal ornaments, and society of a very accomplished and valuable member.’ His death was only the first act of an unfolding tragedy: Samuel caught a fever on board ship and died later the same year, while Maria, Mary and Elizabeth Ann succumbed to consumption in 1784, 1787 and 1792 respectively. Thomas senior followed them in November 1795, the victim, it is said, of a broken heart.

The Song of Moses was one of Tom’s last and greatest works. It is a setting of a libretto by the Revd John Hoadly, sometime chaplain to the Prince of Wales and librettist for many of Maurice Greene’s major works. Hoadly had died in 1776, and the libretto seems to have come to Linley by way of David Garrick, the manager of the Drury Lane Theatre. The original intention seems to have been for Thomas Linley senior to set it, but after criticizing it in letters to Garrick, he passed it on to his son. To be honest, his criticisms have some substance: the text is derived from Exodus 15 and covers the same ground as Part 3 of Handel’s Israel in Egypt, but Hoadly’s rhyming verse does little more than obscure and dilute the directness and vitality of the biblical words. Nevertheless, this is more than made up for by Linley’s music, which seizes every opportunity for vivid illustration of the dramatic situations. It is not clear how the solo singers are meant to represent individual characters, for no libretto survives, though the two soprano parts in the first duet are allocated to Moses and Miriam in the score.

Linley’s music is typical of large-scale works by English composers of the time in that the choruses are written in a broadly Handelian idiom, but the airs are mostly in a more modern galant style, inspired largely by J C Bach. This was done partly because the galant style was not a very promising idiom for choral music—as the largely homophonic and syllabic writing in the Masses of Haydn and Mozart shows—and partly because English musicians were much more historically aware than their counterparts abroad. The orchestral repertory had already developed a retrospective cast, mixing concerti grossi by Corelli, Handel and Geminiani with the latest Continental symphonies, and English composers clearly thought that by mixing old and new they would make their compositions more agreeably varied. Linley’s choral writing is extraordinarily assured and varied, ranging from the powerful ‘Praise be to God, and God alone’, with its chorale-like theme ingeniously combined with vigorous descriptive ideas, to the vivid ‘The sea is before them’, a riotous evocation of barbaric pursuit and plunder.

It is not clear whether it was Hoadly or Linley who decided to allocate most of the material dealing with the downfall of the Egyptians to the choruses and the recitatives, leaving the airs to deal with the confidence of the Israelites in God. Nevertheless, the airs are remarkably varied. ‘Thy arm, O Lord of Hosts’ is essentially a modernized reworking of ‘Rule Britannia’ with the vocal writing and the orchestration of the 1770s, while the minuet-like duet ‘Jehovah ever be my song’, with its delightful writing for two bassoons, explores the more galant idiom of Thomas Arne’s later music. ‘Thou, as thy mercy had decreed’ is a delicious essay in the style of J C Bach, with its sophisticated writing for two flutes, often doubling two violas at the octave. The final duet, ‘Thither thy people, Lord’, explores the highly elaborate and decorated style of mid-eighteenth-century Italian operatic music, perhaps most familiar to us today from early Haydn. Despite its poor libretto, The Song of Moses has a grandeur and sweep that makes its subsequent neglect hard to understand; this recorded performance is probably the first since 18 March 1778, when it was revived at Drury Lane.

The anthem Let God arise is Linley’s earliest surviving major work. It was written for the Three Choirs Festival and was performed in Worcester on 8 September 1773 and again in Gloucester on 14 September 1775. It is a large-scale work in the tradition of orchestral anthems by Handel and Linley’s teacher William Boyce. A fine example of the archaic French overture, with a closely wrought fugue on a bell-like subject, is followed by the usual succession of airs and choruses. The music has less individuality than The Song of Moses: the tenor and bass arias are heavily dependent on the type of Handel aria best known from ‘Ev’ry valley’ in Messiah, while the charming duet ‘He is a father’ is another essay in the minuet-like genre we associate with Thomas Arne. However, the choruses have real strength and contrapuntal power. The last, with its elaborate and beautifully worked-out double fugue, is an astonishing achievement for a teenager.

Linley’s early death was a tragedy for English music, as many recognized at the time. George III commissioned four memorial volumes of his music, now in the British Library (from which the editions recorded here were made), and Mozart remarked to Michael Kelly in 1784 that ‘Linley was a true genius’ who ‘had he lived, would have been one of the greatest ornaments of the musical world’.