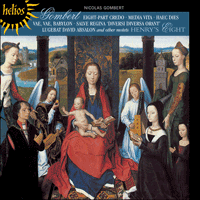 The Flemish composer Nicolas Gombert is believed to have been a pupil of Josquin; his style of composition is equally assured and yet there are elements of significant innovation. As early as 1556 Gombert was regarded as the absolute model of harmonic and imitative writing, and his general avoidance of rests broke much new ground.

This recording of eight works from his prolific output (some 160 motets alone) includes the monumental eight-part Credo and the extended Salve regina which uses no fewer than seven separate texts in honour of Mary (hence the subtitle, 'different people pray different things').

Gombert is also famous for having been consigned to the galleys of a trireme after being caught violating a choirboy.

The lost generation’ is a fitting label by which music historians have designated those composers whose work spans the period from the death of Josquin Desprez in 1521 to the advent of Orlande de Lassus during the later 1550s. Among the rich diversity of composers of this time – including Clemens non Papa, Adriano Willaert, Jachet di Mantua, Costanzo Festa, Ludwig Senfl and Cristóbal de Morales – it is Nicolas Gombert who was singled out as the leading light by the theorist and composer Hermann Finck in 1556: ‘Yet in our very time there are innovators, among whom is Nicolas Gombert, pupil of Josquin of blessed memory, who shows all musicians the way, nay more, the exact path to the desired imitative manner and to refinement; and he composes music entirely different from the past. For he avoids rests, and his composition abounds in both full harmonies and imitations.’

Of Gombert’s life we know little. He was born in French Flanders in a village west of Lille around 1500. In 1526 he travelled to Spain to become a singer in the court chapel of Emperor Charles V and was granted benefices in Courtrai and Béthune. In 1529 Charles V appointed him Master of the Children of the Chapel, a post that was to involve him in much travel throughout western Europe. After 1538, however, his name disappeared permanently from the imperial court records. From the humanist Hieronymus Cardanus we learn that Gombert had been condemned to the galleys of a trireme for having violated a choirboy. While fettered he composed the ‘swan-songs’ (perhaps his later Magnificat settings) which moved the Emperor to pardon him and grant him a prebend in Tournai. A letter from Gombert to Ferrante Gonzaga, Gran Capitano to Charles V, written in Tournai in 1547, is our sole remaining biographical document. The date of his death is unknown: he was clearly understood to be alive when Finck wrote of him in 1556, but he was dead by the time Cardanus published his account in 1561.

Gombert’s extant works include eleven Masses, a separate Credo, eight Magnificat settings, over one hundred and sixty motets (more than a quarter of which are Marian), and some eighty chansons and other secular pieces. As is common during this period there are many misattributions and a number of cases of doubtful authenticity. From 1529 Gombert’s works found their way into print: major collections of his motets were published in Venice in 1539 and 1541, while it was common for miscellaneous printed collections of Masses, motets and chansons to contain at least one work by Gombert up until well beyond his death. In his Declaración of 1555, Juan Bermudo encouraged lutanists to play the music ‘del profundo Gomberto’; the large number of extant manuscript and printed intabulations for lute and for organ (among which are transcriptions of otherwise unknown pieces) suggests that this advice was heeded.

It is difficult to know how literally one is to read Finck’s description of Gombert as a ‘pupil of Josquin’. He may well have studied with the ageing composer since the region of his birth is not very distant from Condé, where Josquin spent his later years, and there is every reason to suppose that Gombert’s musical education occurred at the hands of a master. But, as Finck noted, Gombert’s style is very different from what went before him: ‘He avoids rests.’ This is the most immediate contrast with the music of Josquin, who typically engages in paired imitations in alternation, the complement of voices being employed toward the conclusion of one line of words before a pair of voices takes up the next point of imitation. Gombert, on the other hand, involves all voices in his imitations, sustaining the full texture, introducing the new point (with the next line of text) while the other voices are still bringing the previous line to its conclusion. In this way he combines the continuous texture of Josquin’s teacher, Ockeghem, with the imitative technique of Josquin himself – ‘both full of harmonies and imitations’.

The eight-part Credo comes down to us in a publication of 1564. It is a powerful work, masterly in technique, monumental in structure, rich in texture, containing much antiphonal writing between opposing groups of four voices. Gombert’s word-setting, primarily syllabic, avoids the pictorial but ensures appropriate declamation and mood. Noteworthy are the handling of ‘et sepultus est’ and the avoidance of any regular cadence at ‘non erit finis’. Since independent settings of the Credo are not uncommon we need not search for lost movements of a complete Mass. The first motif, however, is related to the opening of the motet Lugebat David Absalon, preserved in the same print.

Haec dies quam fecit Dominus is the gradual of the Easter Mass. Gombert’s setting, included in the first book of his five-part motets published in Venice in 1539, derives its imitative points from the plainsong melody. Scored for low voices, it is a solemn rather than exuberant setting of the text. The six-voice Qui colis Ausoniam is an occasional work composed for the treaty signed in Bologna in 1533 by Charles V, Pope Clement VII and a number of other Italian rulers. Subsequently published in Venice in 1539, it is an appropriately festive setting of a text by Nicolaus Grudius.

The Salve regina, labelled ‘Diversi diversa orant’ (‘Different people pray different things’), is included in the second book of four-part motets, published in Venice in 1541. This is an exceptional work employing seven Marian texts and paraphrases of their plainsong melodies. The cantus paraphrases ‘Salve regina’, one of the four great antiphons of the Blessed Virgin Mary. The altus begins with another of these antiphons, ‘Ave regina caelorum’, which is followed by the shorter antiphon ‘Beata mater’. The tenor commences with the sequence for the Purification, ‘Inviolata, integra et casta es, Maria’, and proceeds to the antiphon ‘Hortus conclusus es’, formerly associated in some traditions with the Assumption. The bassus first paraphrases yet another of the great Marian antiphons, ‘Alma redemptoris mater’, and finally the prayer ‘Ave Maria’. The resulting quodlibet is something of a tour de force in which Gombert forsakes his usual imitative technique in order that, at any one time, four different melodies – each re-shaped by rhythmic alteration and various melodic elaborations and accretions – are sung simultaneously.

Another of Gombert’s Marian motets, the five-voice O beata Maria, was published in the first collection of 1539. The opening provides some of Gombert’s most original imitative technique, the response to the motif mi-ut-fa-mi being sol-mi-la-sol. (Although it is possible, through application of musica ficta and in the name of identical solmization, to eradicate this conflict, there seems to be no authority for doing so, the whole principle of identical solmization being founded on very shaky evidence.)

Vae, vae Babylon is from the second volume of four-part motets. Its text is adapted from a number of verses in the eighteenth chapter of Revelation. The setting is for low voices and the style is declamatory, befitting the prophecies of doom. The eleventh-century Media vita in morte sumus has disappeared from all but the Dominican breviary, where it is the antiphon to the Nunc dimittis on the third Sunday in Lent. Gombert’s setting, published in the first volume of six-part motets in Venice in 1539, adheres closely to the plainsong melody for its polyphonic material. It is a particularly fine example of Gombert’s style as described by Finck: its textures are rich, its imitations generally overlap one another, and the six voices have little rest. Gombert was sufficiently attracted to the melody (and his motet derived from it) to re-shape the material in his outstanding five-voice Missa de Media vita.

The eight-voice motet Lugebat David Absalon is attributed to Josquin in the 1564 print, but its style points to his pupil. The work is a contrafactum, each of whose two sections originated as a chanson, the first of these attributed to Gombert in its unique source (though the same music with less comfortable text also circulated under other names), the second apparently no longer extant in its original form, though the use of an existing melody makes possible the identification of the original text. Who may have been responsible for the present form of Lugebat is not known, but the marriage of music and text is a most felicitous one, resulting in an impassioned portrayal of David’s lament.

In 1626 Francisco Correa de Arauxo published his Facultad organica, in whose preface he included a brief chapter on the ‘punto intenso contra remisso’, or what we would call the simultaneous false relation. Gombert, he claimed, made the most and best use of the device. Research of the past few years confirms that this trait, generally recognized as English, was an integral part of the musical language of Josquin, Gombert and their contemporaries; and indeed, nowhere do we find its use more prolific, more varied or more compelling than in the music of Gombert.