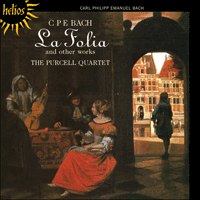 ‘This 1986 recording is still worth hearing. The 'conversational' trio sonata is an astonishing attempt to prove that music can communicate without the need for words, and there is brilliance in the gamba sonata’ (BBC Music Magazine)
‘The Purcell Quartet play with sensitivity and seem well attuned to the particularly individual sensibility of this composer’ (The Penguin Guide to Compact Discs)

By the mid-Eighteenth century, the viola da gamba was an instrument from the past, sustained only by a handful of virtuosi. The best known of these was not C P E Bach, but Carl Friedrich Abel, who eventually settled in London and collaborated with C P E Bach’s younger brother Johann Christian. The Bach and Abel families were quite closely linked; but if Abel and C P E Bach did meet in 1746 (the date of the Sonata on this disc, track 8), it will have been privately, since Abel was then working at the Dresden court, which was not on good terms with that at Berlin. There is, in fact, little specifically idiomatic to the gamba in this Sonata; Bach may not have been closely acquainted with its capabilities, and on paper most of it looks as if it could have been written for the violin—even to the extent of using the treble clef. But a few passages take advantage of the lower range of the instrument and its capacity for chords, the central movement requires considerable virtuosity, and as a whole it sounds remarkably impressive on the instrument.

The Trio in C minor, composed in 1749, is an attempt to show that instrumental music could have a meaning outside itself. Eighteenth-century aesthetic theory was rational, and music—especially instrumental music—was generally undervalued because it could not be translated into words. Bach set out to show that music could represent a dialogue, not just a single emotional state. For those who could not understand the language of music, he offered a translation. This may seem like an admission that his meaning is not as clear as he intended. In fact, without his clues, his general drift is clear; but the detailed programme includes a certain amount of amplification which the listener could supply only from his imagination.

In this work, the violins represent two of the four basic psychological types which had dominated medical theory since the ancient Greeks. Melancholy has retained its original meaning; the sanguinary man has a predominance of blood in his make-up which makes him ruddy-faced, courageous, hopeful and amorous.

The narrative of the first movement can be outlined as follows: Melancholicus makes the first statement in duple time, Allegretto and muted. The dominant half-close means that Sanguineus is asked whether he agrees with Melancholicus. The former, unmuted, makes it clear by a change of time (to a triple Presto) and key (from C minor to E flat major) that his opinion is different. Sanguineus soon deliberately moderates his jollity in an attempt to persuade Melancholicus, also ending with a question indicated by a dominant close. A brief pause is intended to give him time to cheer up the other. But Melancholicus relapses into his former mood. Sanguineus impatiently replies, restating his case, and breaks off with an invitation to the other to complete the phrase. But instead he interpolates a continuation of his own argument. Sanguineus is not sure whether Melancholicus is acting from malice, ignorance or forgetfulness; so, with some bitterness, since he has resisted persuasion twice, he shows him how the phrase should have continued. Melancholicus begins to relent, and makes a correct answer. But this difficult though small step (of only six notes) forces him into another pause to recover; then he returns to his original theme again. Sanguineus mocks him by comically imitating his thoughts, converting them to his rhythm. Here Melancholicus takes off the mute and follows the other, and they play together an extended section based on the Sanguineus subject. There is a pause; Sanguineus expects the other to lead, but he puts on his mute and reverts to his original topic, again ending with a question. Sanguineus replies with a contrary answer, but Melancholicus answers his question with a snippet of his own hypothesis. Sanguineus angrily mimics it, expanding the compact phrase to span an octave. After a pause he starts again, and Melancholicus continues correctly for a few notes then slips again into his melancholy. Here Sanguineus, following the previous success of the method, plays on Melancholicus’ sense of honour to win him over and scoffs at his ideas. He invites him again and Melancholicus follows him, without mute. But the same thought which has already distracted him brings back his melancholy. Sanguineus quickly draws him out of it. There is a section in which the players move together. Sanguineus has lost some of his fervour. But his flattery of Melancholicus gives rise to renewed melancholy. Sanguineus laughs at this. They alternate until Melancholicus falls into a deep sleep. Sanguineus continues to make fun of him, but stops twice to listen whether there is a reply and hears nothing. The first movement ends here; despite its programme, it has a coherent form, ABABA (though tonally more complex than that). The dialogue is confined to the A sections, which are considerably shorter than the time taken to describe them might suggest.

The second movement follows without a break, Melancholicus again playing muted. He starts mumbling to himself; Sanguineus replies frivolously. They continue, playing contrasting themes until (at the end of the movement) Sanguineus asks the other to join him. Getting nowhere, he asks him strongly (one single note); meeting only silence, he asks again more politely. Melancholicus, having removed his mute, lets himself be moved, and indicates his change of mind by imitating a six-note phrase of Sanguineus. Sanguineus continues it, Melancholicus repeats it to show his steadfastness, then both conclude the Adagio in unanimity. This unanimity remains throughout the Allegro; since Sanguineus has won the argument, he politely lets Melancholicus begin, and the two instruments converse in a friendly manner.

Friendly discourse is the pattern of the relationship between the two violins in the Trio Sonata in B flat, written in 1754. The upper instruments either alternate in amicable dialogue or move together in parallel thirds and sixths. The quick changes of mood which are characteristic of the keyboard sonatas are less in evidence here. The muted main theme of the slow movement makes one wonder whether Mozart knew it. The pizzicato theme derives from the bass part, which is thematically more integrated with the violin parts than in the other movements. In the last movement, the violin writing is more imitative in texture.

Although much of his chamber music was published, C P E Bach’s fame depended more on his solo keyboard music and especially his instruction book on harpsichord-playing, Versuch über die wahre Art das Clavier zu spielen (‘Essay on the true art of playing the keyboard’), published in 1753. In many respects, the move to Hamburg caused a significant change in his output, and he concentrated particularly on church music. But he continued to write for the keyboard, especially for the clavichord, for which he produced music of a great emotional intensity. The dance La Folia was first noted two centuries earlier in Spain, and became popular in Italy earlier in the seventeenth century. Eighteenth-century composers knew it chiefly from Corelli’s variations for violin and continuo (Op 5 No 12), and its chord sequence became a frequent basis for similar treatment. Bach’s variations, written in 1776, are alternately expressive and virtuosic.