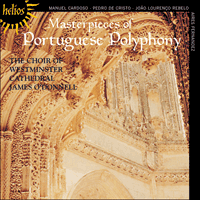 ‘Delectable though this music is, it needs performers who can do it justice, and James O'Donnell and his choir do that and then some. Whether depicting a soul thirsting for the Lord's rest, or giving thanks for salvation, the smooth trebles soar into the rafters of Westminster. This is a CD that brings the listener one step closer to heaven’ (bbc.co.uk)
‘Although this music is likely to be unknown to most collectors it will prove, as it has to me, a welcome and important discovery’ (The Tablet)

The music of the Portuguese Renaissance has until very recently languished in almost complete obscurity. Certain composers who were fortunate enough to see their works published during their lifetimes—such as Manuel Cardoso, Duarte Lôbo, and Filipe de Magalhães—have begun to receive the recognition they deserve, but the same does not yet apply to the vast body of music which is preserved only in manuscript. Much the largest collection of such manuscripts, dating from the sixteenth century onwards, originated at the Augustinian monastery of Santa Cruz in Coimbra (in northern Portugal). This monastery, the mother-house of the Augustinian congregation in Portugal, was an educational and cultural centre of the first rank, with a flourishing musical life. The most important composer to have worked there, Pedro de Cristo, was born in Coimbra in about 1550, and took his vows at Santa Cruz in 1571. He eventually succeeded to the post of mestre de capela (that is, director of the polyphonic choir) in the 1590s. Dom Pedro also spent at least two periods in Lisbon, as mestre de capela at the Monastery of São Vicente. An obituary marking his death in 1618 mentions his skill as an instrumentalist as well as a composer, and notes that his musical talents caused him to be sought after at many houses of the Augustinian congregation.

The sacred works of Pedro de Cristo—which number over two hundred—dominate the manuscripts from Santa Cruz dating from the 1580s to the 1620s; indeed, several of these manuscripts are in the composer’s own hand. Many of the texts which he set reflect devotional emphases particular to Santa Cruz. A clear example is the motet Sanctissimi quinque martires, celebrating the ‘five martyrs of Morocco’, Franciscans who died in 1220 while preaching to the western Moslems, and whose relics were kept at Santa Cruz. While this piece displays for the most part a conventional contrapuntal technique, Dom Pedro often employed a more vertically conceived and rhythmically animated style, seen particularly clearly in his settings of responsories for Matins on Christmas Day and in works scored for two choirs (such as the Magnificat on the eighth tone and Ave Maria performed here). In the Christmas responsories each sense-unit of the text is set separately, with meticulous attention to proper accentuation, producing a vivid form of musical rhetoric.

Among the other Portuguese composers whose works are preserved in the manuscripts from Santa Cruz, one of the finest is Airez Fernandez. Unfortunately, nothing is yet known for certain about his life (although it is likely that he worked in Coimbra, possibly at the cathedral), and relatively few pieces ascribed to him survive complete. The setting of the Marian antiphon Alma redemptoris mater demonstrates his skill at producing marvellously shaped phrases within a very simple texture. The achievement here is the more impressive for the fact that the tenor part follows closely the plainchant melody for this antiphon.

Frei Manuel Cardoso was born in Fronteira, part of the archdiocese of Évora, in 1566 (though formerly his birth date was thought to be 1570) and professed as a monk in Lisbon on 5 July 1589. He was, according to Father Manuel de Sá, ‘sent to Évora, there to study Grammar and the art of Music’ as soon as he was old enough, which he was considered to be in 1575 at the age of nine. Cardoso was taught there by Father Cosme Delgado and Father Manuel Mendes.

Later in his career, Cardoso was to enjoy the favour of the Spanish royal house. He dedicated his 1631 book of Masses on the Ab initio theme to Philip IV. He was also connected with the Bragança family while he was at the Carmelite Priory in Lisbon, and it is probable that the future King João IV was his pupil as well as his patron. Cardoso enjoyed great esteem during his lifetime for his pious life as much as for his exceptional musical gifts. He was frequently mentioned by his renowned contemporaries, literary and musical, and when he died in 1650 he was held in universal affection and respect.

There survive five published collections containing Cardoso’s œuvre: three books of Masses and two volumes containing Magnificats and motets. Two of the motets recorded here—Sitivit anima mea and Non mortui—were in fact included in one of the Mass collections: that of 1625 which contains the Missa pro Defunctis. They both have texts associated with the funeral rites. The other works come from the 1648 book which was Cardoso’s last publication.

Characteristic of all these pieces is the combination of contrapuntal writing in the manner of Palestrina (the parody Masses in Cardoso’s 1625 book are all in fact based on Palestrina) with a very personal grasp of harmony. The augmented intervals, unexpected entries and progressions, and false relations which abound are, while not unique to Cardoso, certainly even more evident in his work than that of his contemporaries in Portugal such as Duarte Lôbo. Cardoso did also write polychoral music—a more obvious outlet for such features of ‘Baroque’ style—but it was all lost in the earthquake of Lisbon in 1755. It is the admixture of these characteristics with his excellent knowledge of classic Palestrinian counterpoint that gives Cardoso’s music its individuality. Nos autem gloriari illustrates well the typical procedure in these motets, which begin with conscientiously worked imitation (often of three points, the second being an inversion of the first) and then continue in a less rigorous fashion, though always with the greatest respect for word setting. In Mulier quae erat the chromatic inflections of the imitative working of the opening are such that no specific tonality is apparent until all the entries have appeared and, as it were, confirmed their tonality with each other.

These chromatic twists, perhaps curiously, do not contradict the serenity transmitted by much of Cardoso’s music (whether motets or Masses); and this, one may feel, is truly a characteristic of the Baroque. Apart from the Missa pro Defunctis, the most resplendent example of this ‘chromatic serenity’ is probably to be found in the Lamentations. Those for Maundy Thursday are replete with all those features found in the motets, and yet Cardoso is never guilty of untoward exaggeration. Liturgical propriety is alway respected.

João Lourenço Rebelo was born in Caminha, in the province of Minho in northern Portugal in 1610, forty-four years after Cardoso, though he outlived him by only eleven. His brother Marcos Soares Pereira (the reasons for Rebelo’s changing of his name are unknown) was chaplain-cantor at the Ducal Chapel in Vila Viçosa, and when he took up the appointment he took Rebelo with him, there to receive instruction in music. Ducal (and later royal) patronage was a fundamental element in Rebelo’s life, and it would appear that Dom João IV wrote two six-part motets (of which only one voice part now survives) to complete one of Rebelo’s publications.

Most of Rebelo’s music was published in 1657, a year after the death of the royal patron who had in his will ordained the printing of the edition. It contains fourteen Psalm settings (two sets of seven; each text set twice), four Magnificats, Compline music, two Lamentations, and a Miserere. The modern polychoral style of most of these works makes Rebelo a figure of considerable significance in the history of Portuguese music. There is also a small group of unpublished works for smaller ensembles, among which may be found Panis angelicus.

While it cannot be described as polychoral, Panis angelicus is in other respects a good illustration of Rebelo’s music, using as it does a distinctive, sometimes fragmented, melodic style and stretches of homophonic or near-homophonic writing. Here we see perhaps the furthest limits that the combination of genuinely sustained contrapuntal writing with elements of the newer styles could attain. In this it may well stand as an emblem for Portugal at this period, standing at the farthest edge of Europe and receiving the winds of change from elsewhere in Europe in her own time.