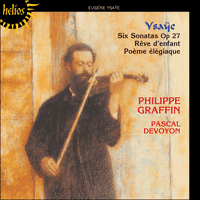 Sonatas for solo violin & other works

Eugène Ysaÿe was the charismatic and flamboyant successor to Wieniawski in the great French tradition of violin virtuosity. Yet he was to take the genre to new and giddy heights with his Six Sonatas for solo violin of 1924. Each sonata is dedicated to one of the rising stars of the younger generation of virtuosos and the work as a whole is in many ways a twentieth-century response to the Six Sonatas and Partitas for solo violin by Bach.

The two works for violin and piano on this recording are in a rather less virtuosic vein and date from some thirty years earlier. Rêve d'enfant is a short and tender lullaby in the spirit of Fauré, while the Poème élégiaque, itself dedicated to Fauré, combines a sublime atmosphere with unashamedly Wagnerian vision.

Born in Liège, famous for its violinistic tradition, Ysaÿe was not a child prodigy but soon became the student first of Henryk Wieniawski in Brussels and then of Henry Vieuxtemps, who brought him to Paris where he spent three important years at the end of the 1870s. Wieniawski and Vieuxtemps are both legendary figures from the history of the violin, in the tradition of virtuoso–composers like Paganini: Ysaÿe was to become their spiritual son. A self-taught composer, his first works were violin showpieces written for his own use—following in the footsteps of his masters—including tarantellas, mazurkas and even concertos, which for the most part remain unpublished. In 1878 a first journey to Germany to play with Clara Schumann opened new horizons, introducing him to the great Joseph Joachim who, upon hearing him, declared: ‘I have never heard anybody play like that.’ This statement, however ambiguous, does underline the novelty of Ysaÿe’s playing for the time, particularly concerning his vibrato. Joachim used it very sparingly, considering it an effect associated with café violinists, whereas Ysaÿe’s vibrato was constant, varied and free. Ysaÿe’s playing was modern, with a full palette of colours, and he was a powerful influence within ‘new’ French music. In 1879 he took some lessons with Joachim and settled in Berlin where he became Konzertmeister for the Brasserie Bilse orchestra, which later became the Berlin Philharmonic. Joachim was a great influence on Ysaÿe, helping the young virtuoso to become a true musician.

In 1882 Ysaÿe returned to Paris and formed ties with the composers of the Société Nationale, active in the renewal of French music. Like Joachim, he immersed himself in the music of his time and soon formed his own string quartet. Ysaÿe inspired numerous masterpieces: first Franck’s sonata, which he received as a wedding present in 1886, then the string quartets of d’Indy and Debussy, the Concert and Poème of Chausson, the lesser-known string quartet of Saint-Saëns, the first piano quintet of Fauré and the sonatas of Lekeu, Magnard, Vierne, Lazzari, Raff, Ropartz, and others. All these works are dedicated to him.

In Brussels Ysaÿe was appointed Professor at the Conservatiore and, with ‘Le groupe des vingts’, which organized concerts during art exhibitions, he premiered numerous French works. It was not long before he created his own concert society bearing his name and thus acquired some experience as a conductor. During the First World War he was forced into exile in London, where he gave numerous concerts for the allied forces. He was offered the Directorship of the New York Philharmonic, which he refused, but he later accepted the equivalent post in Cincinatti, a position he held from 1918 to 1922. French music was to be highly represented during his stay. He then went back to Belgium where his sons helped him to rebuild the ‘Société des Concerts Ysaÿe’. He continued to teach and compose, even writing an opera in the Walloon dialect—Pier ly Houyeu (‘Peter the coal miner’). After hearing it on the radio on his deathbed, Ysaÿe died in Brussels in 1931.

With the Poème élégiaque, Op 12, written in 1892–3, Ysaÿe moved away from the pieces he wrote merely for virtuosic purposes in his youth. The only legacy from the virtuoso practice of the past is the scordatura: the G string is here tuned to an F, giving a dark colour, the violin sounding sometimes like a viola. First written for violin and piano, Ysaÿe later orchestrated the piece. The work is dedicated to Gabriel Fauré, from whom he had already commissioned a piano quintet (Op 89, which the composer was to take a further ten years to finish). However, it was upon Ernest Chausson that the Poème élégiaque was to have a great influence, serving as the example for the famous Poème which he would write three years later. Ysaÿe the interpreter participated here fully in the creative process. The similarities between the two works are striking: the general atmosphere, the Wagnerism, the shape, the sublime trills at the end … Ysaÿe helped in writing the violin part, in particular the cadenza of the work which Chausson eventually called ‘mon– ton poème’ (‘my–your poème’).

At about the same time, during a particularly long tour, Ysaÿe wrote his Rêve d’enfant (‘A child’s dream’), Op 14, which he dedicated to his youngest son Antoine. It is a lullaby close in spirit to Fauré’s Berceuse, Op 16, and its short length allowed its composer, at the beginning of the recording era, to leave with us a particularly touching and inimitable performance.

The Six Sonatas for solo violin, Op 27 constitute the violinistic testament of Ysaÿe. Each of the sonatas is amicably dedicated to a violinist of the younger generation. They were composed with the personality of each dedicatee in mind, but maintain an overall unity of style. Ysaÿe sketched them in twenty-four hours following a recital by Joseph Szigeti, to whom the first sonata is dedicated. Ysaÿe was impressed by the way Szigeti played Bach, and Szigeti saw in the Op 27 ‘an attempt, probably subconscious, from Ysaÿe to interpret this music’. Indeed, I believe that these sonatas are impregnated with Ysaÿe’s own interpretation of Bach’s sonatas as much as with the masterworks themselves.

The first sonata adopts the Bach sonata form: four movements with a fugue, a form that Bartók, a close friend of Szigeti, would take on later in his sonata for solo violin. Based on the Gregorian ‘Dies irae’, the second sonata is dedicated to Jacques Thibaud, who was his student and protégé. The two first movements were inspired by Bach’s third partita in E major and one could link this sonata with the principle of ‘collages’ that the cubist painters started using some fifteen years earlier.

The third sonata (titled ‘Ballade’, a reference to Chopin) is inspired by the character—free and profoundly Romanian—of its dedicatee, George Enescu. Ysaÿe had a special admiration for Enescu both as a composer and violinist. Josef Gingold, while studying with Ysaÿe in Brussels, premiered the work during a dinner in honour of Queen Elisabeth of Belgium. The young violinist, while warming up in a side room, realized that the beginning of the sonata had slipped his mind, discovering with a fright that he had left the manuscript at home. He resigned himself to disturbing Ysaÿe (whose foot had been amputated due to gout and could only leave the table with difficulty). He explained the situation to his master but to his great surprise, Ysaÿe did not remember it either! Ysaÿe advised him to start from the main theme and went back to his table in a very bad mood. A little later, while going on stage, Gingold recovered his memory and could not help laughing throughout his performance. The work became a great success and is now an essential part of the repertoire for solo violin. One can also notice the influence of Debussy’s La mer in the development section.

The fourth sonata is dedicated to Fritz Kreisler. The Sarabande is of great tenderness, based around four-note ostinato. The Finale is characteristic of Kreisler’s playing and of his short pieces like the Tambourin chinois. To thank him Kreisler wrote and dedicated his Recitative and scherzo caprice for violin solo ‘à la Ysaÿe’.

The fifth sonata is dedicated to Mathieu Crickboom, who was the second violin of Ysaÿe’s quartet (and therefore involved in the premieres of Debussy’s quartet and Chausson’s Concert). The first movement has great poetry but is also sprinkled with autobiographical elements—a souvenir of ‘vacances studieuses’ where, to avoid the summer heat, the violinists would awake early. ‘L’aurore’ (‘The dawn’) is therefore also violinistic, describing the morning exercises with first the ‘sons filés’ (very long notes, without end, to develop control of the bow, something of which Ysaÿe was an advocate), then the work on intonation, verifying the note with pizzicato on open strings; then the arpeggios come with the rising of the sun. This is followed by a picnic and a ‘Danse rustique’, a sort of Walloon farandole.

The sixth sonata was written for Manuel Quiroga, a Spanish virtuoso whose career was interrupted abruptly by an accident. The work brings to mind the music of Sarasate. This Spanish caprice brilliantly ends the cycle, like a final act of bravado.

I dedicate this recording to the memory of Professor Josef Gingold and Philipp Hirschhorn, who both taught me so much.