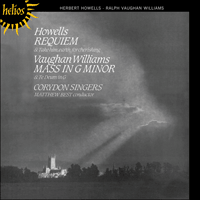 The long-awaited reissue of a treasure from Hyperion’s earliest catalogue.

‘A moving and impressive addition to the a cappella repertoire’ (The Daily Telegraph)
‘The Corydon Singers are superb in this music … truly exquisite and subtle; this is wonderful choral singing in every way’ (American Record Guide)
‘An hour of the finest English choral music and not to be missed’ (The Good CD Guide)
‘Beautiful’ (Hi-Fi News)
‘One of the most luminous and touching of 20th-century Requiem settings’ (Tower.com)

One of the early experiences that confirmed Herbert Howells in his belief that he should become a composer was hearing the first performance of Vaughan Williams’s Fantasia on a theme by Thomas Tallis in Gloucester Cathedral in 1910. His ensuing friendship with VW developed into a musical understanding between them, an empathy clearly illustrated by the works selected for this recording.

Vaughan Williams’s Mass in G minor is dedicated ‘To Gustav Holst and his Whitsuntide Singers’. This group and Sir Richard Runciman Terry’s Westminster Cathedral Choir, which specialized in ‘early’ choral music, were the inspiration for the work. Indeed, the completed Mass was sent to Terry for comment—he was delighted by it—before its first performance by The City of Birmingham Choir conducted by Joseph Lewis on 6 December 1922. Terry gave the first liturgical performance of the work on 12 March 1923. As conductor of the eminent Bach Choir, Vaughan Williams had acquired practical experience of the capabilities of such a group—experience that bore fruit in this Mass. The idiom that he adopted for it, which unwittingly elicited the ‘back to Hucbald’ jibe (after the tenth-century music theorist) from a contemporary critic, is purposefully spiritual in the manner of great Elizabethan liturgical music, employing clearly defined imitative entries for the voices, melodic shapes derived from plainchant, and modal harmonies. The composer did not abandon, though, the suggestions of English folksong and parallel harmonies typical of his style in general. A number of commentators have noted how the disposition of voices—four soloists plus two antiphonal bodies of performers—is akin to that used for the strings in the ‘Tallis’ Fantasia, revised by Vaughan Williams at this time. Of the conventional five movements, the fourth is most notable both for the ongoing structure of Sanctus–Hosanna I–Benedictus–Hosanna II, and for the impressionistic undulations of the pianissimo opening, reminiscent of the beginning of the Pastoral Symphony which had first been performed in the January of 1922.

Vaughan Williams composed his Te Deum in G major, for divided mixed choir and organ, for the enthronement of Dr C G Lang as Archbishop of Canterbury. This first performance was on 4 December 1928 in Canterbury Cathedral, and was conducted by Walford Davies. It is a less flamboyant, less brilliant piece than the later Festival Te Deum, written for the coronation of George VI in 1937, but it still expresses the rejoicing inherent in the occasion, and in many ways seems more heartfelt. The choral writing is straightforward, beginning in simple octaves, over an ostinato organ accompaniment (shades of the Pastoral Symphony again) and extending to canon between the two halves of the choir, nominated decani and cantoris to obtain antiphonal effect. A 6/4 section provides the chief contrast before a new idea is introduced, with the words ‘Thou art the King of Glory’, that eventually gives way to the flowing figure of the opening. Its now minor mode only succumbs with the final pianissimo ‘tierce de Picardie’.

Howells’s a cappella Requiem of 1936, for divided mixed chorus and soloists, represents the composer’s first working of ideas that were to blossom more fully in his other ‘Requiem’, the Hymnus Paradisi (1938). These ideas had their tragic origin in the death in 1935 of the composer’s only son, Michael Kendrick Howells, aged nine, from spinal meningitis. It was in the writing of these works that Howells achieved some ‘release and consolation’ from ‘a loss essentially profound and, in its very nature, beyond argument’. Although Vaughan Williams prevailed upon the composer to release Hymnus Paradisi, ‘a personal, almost secret document’, for performance in 1950, it was not until 1980 that the Requiem was reassembled from manuscript, with the help of Joan Littlejohn, and released for performance and publication. It is in six movements and opens with a setting of the Sarum text ‘Salvator mundi’, in English translation ‘Saviour of the world’. The smooth melancholy of the apostrophic opening soon gives way to more poignant supplication, with an attendant slackening of pace and the splitting of the choir for answering phrases.

The setting of Psalm 23 that follows has strong melodic connections with its setting in the third section of Hymnus Paradisi, but here the textures are much simpler and more stark, at times like choral chanting. The ‘Requiem aeternam (I)’ is a curtailed version of that which forms the second section of Hymnus Paradisi, moving from desolation to hope. Psalm 121 has a syllabic setting in the manner of the second movement but with baritone soloist, and is followed by ‘Requiem aeternam (II)’. From hushed stillness this movement builds to a luminous climax at ‘Et lux perpetua luceat’ before dying calmly away.

The final movement ‘I heard a voice from heaven’ (a text from the Burial Service) is very close to the fifth section of Hymnus Paradisi, though the solo parts have been altered. The final ‘they rest from their labours’ has an air of blissful peace that sums up all that Howells must have wished for his child now released from torment.

In the November of 1961, Howells was to set this text in English translation by Helen Waddell for a commemorative American commission on the assassination of President Kennedy. The unaccompanied motet Take him, earth, for cherishing was first performed in Washington in 1964 and is one of the best of Howells’s shorter pieces, with its clear outline, tunefulness, and arresting harmonies. The bare octaves of the opening are repeated with fuller harmony before an increase in speed leads to a chill section, pervaded by the tritone, at ‘Comes the hour God hath appointed’. With the B major of ‘Take, O take him, mighty leader’ the purpose of the preceding sections becomes clear and, despite constant hints at B minor over the long ensuing pedal on B, the final crystallization of the major that ends the motet becomes inevitable—feared Death becomes the gateway to eternal light.