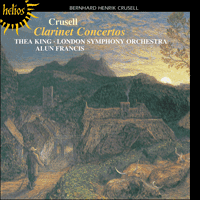 The clarinettist Bernhard Henrik Crusell (1775–1838) was more than a virtuoso writing works as a vehicle for his own performances. His compositions are today recognized as among the best in the clarinet repertoire of the early nineteenth century. The heyday of the wind virtuoso, during which he lived, came at a time when great changes were taking place in the style and taste of musical composition. The style established by Mozart and Haydn was first transformed by Beethoven and then considerably released from its fetters by the early romantics. Crusell played an important part in adapting these transitions to compositions for the clarinet. Early works for the instrument by Karl Stamitz and the virtuosi Michel Yost and Xavier Lefèvre had been severely restricted by the limited capabilities and range of the clarinet. Then in the 1790s Franz Tausch, the great teacher and performer, set unbelievably high standards in technical difficulty and range, especially as far as the altissimo register was concerned. At the same period Mozart, thanks to Anton Stadler’s extended clarinet, was revealing the beauties of the chalumeau register in a way which had never been done before. After the turn of the century Crusell followed their leads but limited his upper range, as did Mozart, to G in alt.

Crusell was born on the 15 October 1775, at Nystad in Finland. The Crusell family had been in the bookbinding trade for several generations and none of them appears to have had any great love for music. When the four-year-old Bernt started showing interest in the clarinet his parents tried to beat it out of him; however, he somehow managed to get hold of a primitive two-keyed instrument on which he developed quite a respectable technique. Luckily the boy’s obvious talents were noticed by a local landowner who took him to the garrison at Sveaborg to hear the military band. Encouraged to play for the officers, he made such an impression that it was suggested that he enrol immediately in the regiment’s Music Corps. Crusell complied, and before long he was appointed conductor of the regimental band, now based in Stockholm which became the composer’s home for the rest of his life. From 1801 to 1833 he was first clarinet in the Swedish court orchestra and earned a reputation as one of the finest soloists of his time. He took lessons in musical theory with the court conductor, the Abbé Vogler, and in 1795 he gave his first concert as a soloist. Still dissatisfied with his technique he left for Berlin to spend seven months in 1798 studying with Franz Tausch, who greatly improved his tone.

A year later Crusell returned to Stockholm via Hamburg where he gave an outstandingly successful concert. His reputation spread, resulting in invitations to St Petersburg in 1801, and Paris in 1803 where he had clarinet lessons with Jean Xavier Lefèvre and studied composition with Henri Berton and François Gossec.

Crusell now began to compose in earnest. Over the next ten years he produced a number of highly inventive works for the clarinet including the three concertos recorded here, three quartets for clarinet and strings (recorded on Helios CDH55031), three duets for two clarinets, and a set of variations on a Swedish drinking song for clarinet and orchestra (Hyperion CDD22017). All of these were published by Peters of Leipzig and Crusell thus became the first Finnish composer to see his work in print.

Crusell’s travel diaries show him to have been intensely curious to learn all he could about the general culture of the countries he visited. He made himself fluent in several languages and also, not surprisingly in view of his heritage, had a strong interest in literature. He joined Sweden’s Gothic Society and set to music poems of some of the eminent men of letters whom he met within its walls. With the exception of his 1798 journey Crusell’s tours were all taken in the entourage of noble or notable persons and it is not unexpected to find that, such was his carefully acquired breeding, he was treated by his patrons as a friend and companion rather than as a servant.

The dedications of his compositions are thus not always mere courtesies but often tokens of true friendship. This was indeed the case with the Opp 1 and 11 concertos. Op 1 is dedicated to Count Gustaf Trolle-Bonde (1773–1855) at whose mansion Crusell was a frequent guest. The Count was an art connoisseur and patron. He studied painting in London during the 1790s and returned to Sweden to inherit huge estates and to found an important art collection. In 1851 he was elected to the Swedish Musical Academy, an honour bestowed on Crusell in 1801. The exact composition date of Op 1 is not known. It was published in 1811 by Kühnel. The third concerto, Op 11, possibly written in 1807, was deposited in 1822 with Peters, who had inherited the firm of Kühnel, but it was not actually published until 1828. Crusell dedicated it, and also a song, to Crown Prince Oscar of Sweden and Norway (1799–1859). He came in contact with the Crown Prince a great deal at Linköping where he spent three months every summer as conductor of two bands of the Royal Life Guards. Prince Oscar took a lively interest in the music performed by the bands and himself dabbled in composition.

All three concertos were definitely written for professional players (the quartets are for amateurs). All became best-sellers on publication and programmes of the time abound with performances. There is a wonderful spontaneity in Crusell’s themes; this, combined with masterly scoring, makes his orchestral tuttis as breathtaking as those in Spohr’s concertos. Unlike Spohr, and uninfluenced (surprisingly) by Tausch who had shocked the musical world by taking his concertos up to the fourth C, Crusell limits the upward range of his solo parts to G in alt. He is meticulous over phrasing and the variety he achieves within an extended semiquaver passage is most remarkable. His conservative key choice was typical of the age in which he wrote: Op 1 is in E flat major with the second movement in the subdominant; Op 11 is in B flat major with the second movement again in the subdominant. Both first movements are in the usual sonata form, second movements in ternary, third movements in rondo. All are rounded off with a coda or codetta.

The lively and beautiful first movement of Op 1 contains three themes of diverse character. This is followed by a very slow and comparatively uncomplex Adagio movement of only forty-eight bars including a codetta. There follows a rondo containing three episodes. Although the rondo is in duple time it is characterized by a strong skipping rhythm generally associated with the triple-time polacca. The first movement of Op 11 again has three themes. Crusell here uses the chalumeau register to particularly good effect. The slow movement is the longest of his three concertos and the most profound. Crusell provides a written-out cadenza for this movement, whereas in Op 1 he gives neither cadenza nor cadence point. The final movement is in sonata-rondo form and in true polacca style.

The second concerto, subtitled ‘Grand Concerto’, was one of the most celebrated. It bears a dedication to Alexander I of Russia, probably in gratitude for favours bestowed during Crusell’s visit to St Petersburg. The layout of the three movements is firmly classical although here and there one notices the influence of Beethoven. This influence is most apparent in the opening ritornello which is concentrated and dramatic and contains a strikingly Beethovenian modulation to D flat major. However, with the arrival of the clarinet the drama becomes predominantly lyrical, despite wide leaps and virtuoso passage-work. The conclusion of the first movement, in the tonic major, is closer to the spirit of Haydn; it certainly dispels any impression of personal-dramatic content.

The slow movement (Andante pastorale) is in D flat major and has much of the romantic warmth traditionally associated with that key. Scored for clarinet and strings alone, it opens with a long melody for the clarinet accompanied by held chords and gentle pizzicato triplets on the cellos. The middle section explores darker minor-key regions before returning to a simple condensed repeat of the opening material. On this recording the cadenza just before the reprise, and the subsequent ornamentations, are by Alun Francis.

Despite the return to F minor, the final Rondo: Allegretto is high-spirited and gives ample opportunity for technical display, though Crusell wisely reserves his most brilliant writing for the coda.