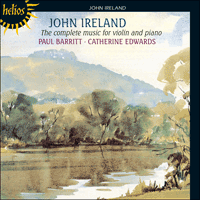 The complete music for violin and piano

John Ireland once confided to a friend that "chamber music is a far finer medium for one's innermost thoughts than orchestral music", and undoubtedly his legacy in this medium formed the core of his achievement as a composer. Not least among his chamber compositions are the two Violin Sonatas recorded on this CD.

The Sonatas are coupled with four delightful miniatures, including the famous The Holy Boy, apparently inspired by one Bobby Glasby, a chorister in Ireland's choir at St Luke's Church, Chelsea!

John Ireland once confided to a friend that ‘chamber music is a far finer medium for one’s innermost thoughts than orchestral music’, and undoubtedly his legacy in this medium formed the core of his achievement as a composer. Not least among his chamber compositions are the two violin sonatas recorded on this CD – which brings together all of the composer’s works for violin and piano.

The earliest pieces are the Berceuse and the Cavatina dating from 1902 and 1904 respectively and composed when Ireland was in his early twenties in the years immediately after he had graduated from the Royal College of Music. Although both are immature works, they demonstrate the composer’s melodic fluency: the Cavatina is a piece of salon music typical of its period, whereas the Berceuse has a more serious intent, but still shows the influence that Brahms had on Ireland’s earliest compositions.

Only five years separate the Cavatina from the Violin Sonata No 1, yet there is a world of difference because the latter is a fully fledged expression of Ireland’s early maturity. Its composition arose through the advocacy of Walter Wilson Cobbett (1847–1937), an amateur violinist, patron of music and lexicographer who enlivened British musical life in the first decades of the century through his passion for chamber music. In a series of far-sighted competitions he encouraged new works for the medium; in 1908 the brief was for a piano trio and Ireland won second prize with his Phantasy Trio; the following year the competition was for a violin sonata. Ireland submitted the Sonata in D minor composed between the summer of 1908 and autumn of 1909; out of 134 entries, Ireland’s work came first. Despite this, and the Sonata’s publication in 1911, it nevertheless waited over three years for its first public performance when Marjorie Haywood played the work accompanied by the composer on 7 March 1913. Ireland dedicated it to Cobbett, subsequently revising it twice, in 1917 and 1944 respectively.

The ‘Allegro leggiadro’ commences with a murmuring, insistent rhythm on the piano, to which is added a striving, purposeful violin theme whose decorative grace notes are significant in the music’s development. A desolate falling chordal sequence played by both instruments acts as a link to the second group of themes: the main one, sentimental in mood and shaped from a rising arpeggio, is heard first on the piano. The violin takes up the opening piano rhythm, transforming it into a brief jig-like melody, and the exposition ends with a climax featuring octave leaps by the violin. These different ideas subsequently create a movement of rapidly shifting moods ending with a coda that leaves the questionings thrown up by the movement more unresolved than answered.

Prefaced by a piano introduction that recurs during the movement, the main theme of the ‘Romance’ is a lyrical, expansive violin melody. It has the character of a song without words, simple in nature initially, but becoming harmonically richer at its climax, and it is repeated to splendid effect on the darker hues of the violin’s G string. A lento middle section is created around a mysterious fanfare-like motif, played at first pianissimo, as if heard from afar or through the mists of time. That Ireland casts it in the remote key of B flat minor is no accident, since its other-worldly quality reflects the composer’s fascination in the ancient past, in the powerful presences which prehistoric places exude, and also his claim to have had supernatural experiences when he witnessed people from long-past aeons. The mystical writings of his friend Arthur Machen fuelled these interests and surely they manifest themselves as much in the music itself as (more overtly) in the titles of such orchestral works as The Forgotten Rite and Mai Dun.

This same passage is also a fascinating instance of two composers conceiving similar musical ideas independently of each other. It bears a strong resemblance to the opening of Vaughan Williams’s song ‘Is my team ploughing?’ from On Wenlock Edge. The two composers were working on sonata and song-cycle respectively during 1909, the coincidence coming to light when Ireland played his work to Vaughan Williams. However, after mulling over the problem they decided it was unnecessary for either to change their compositions since the ideas had been wholly their own.

The lento gives way to a con moto passage in which the passionate outpourings of the violin take the movement to its climax. The return of the ‘song’ follows, leading finally to the piano introduction and a tranquil conclusion embodying a brief recollection of the lento fanfare, now in B flat major.

The sense of resolution achieved in the final bars of the ‘Romance’ paves the way for a carefree ‘Rondo’ finale in D major; its rollicking, cheeky tune is simplicity itself and dances effortlessly through the movement set against a variety of imaginative piano textures. In between the appearances of the ‘Rondo’ come contrasting episodes marked by flowing melodies, romantic and triumphant by turn.

Marjorie Haywood (1886–1953), who gave the first performance of the Violin Sonata No 1, was a leading chamber music performer of the day and a teacher at the Royal Academy of Music. To her Ireland dedicated his Bagatelle of 1911, a charming and witty example of his music in a lighter vein.

The Holy Boy was one of Ireland’s most popular works and caught the imagination of a wide public. Originally written for piano on Christmas Day 1913 and later prefaced by the description ‘Carol’, it was grouped together as the third of Four Preludes. Although the apparent subject is the birth of Christ, the title has a double meaning since its true inspiration was Bobby Glasby, one of Ireland’s choristers at St Luke’s Church, Chelsea, where he was organist from 1904 to 1926. Such was the piece’s success that several arrangements were made, by Ireland and others. Strangely though, this version for violin and piano that Ireland made in 1919 was never published.

Since Ireland was unfit for military service during the First World War, his composing career continued uninterrupted. The Violin Sonata No 2 was composed between October 1915 and January 1917 and received its premiere on 6 March 1917, played by Albert Sammons (to whom it is dedicated) and William Murdoch, who, like Sammons, performed in uniform. What happened next was certainly unusual for a new piece of chamber music at any time – the work caused a sensation. Critical opinion was almost unanimous in its enthusiastic reception, and the day after the first performance Ireland found the publisher Winthrop Rogers on his doorstep before breakfast, literally begging him for the rights to publish the piece. The first edition sold out before it was put on sale and the sonata was publicly performed nine times during that season. Overnight John Ireland had become famous, and his reputation was established.

Apart from being recognized for its purely musical qualities, the piece caught the mood of the period in an uncanny manner and this undoubtedly contributed to its success, as noted by Ireland’s pupil, the composer E J Moeran: ‘Perhaps more than any other work belonging to the period of the Great War, it was representative of the times that produced it, and it at once revealed the composer as a man who felt deeply, even angrily, but without the sickly despondency so dangerously prevalent in those days.’

The first movement has the character of an inner struggle which is dominated by the arresting, decisive theme that is introduced at the beginning by the piano, but almost immediately taken up by the violin. The theme’s chromatic twistings suggest an anxious, troubled questioning, and by and large the other themes that make up the basic components of the movement provide little real respite from the prevailing mood. Only in the exposition’s coda does a transformation of the opening idea offer the suggestion of triumph over adversity. During the development, desolation is uppermost when over a series of pedal points the main theme appears like a forlorn, lonely echo of its former self.

The slow movement is an elegy of poignant directness commencing with a pensive introduction for both instruments. At its heart is a simple, song-like theme sung by the violin soon after, a melody riven with pathos and melancholy suggestive not only of mourning for the dead of the battlefield, but also of a requiem to the pre-War way of the life now gone for ever, a mood recognized and reflected in contemporaneous British works such as Elgar’s trilogy of chamber pieces written around the same time. In the movement’s centre a lilting, tender theme is worked up to a full-bodied harmonic climax before the elegiac main theme returns.

The finale opens with a portentous slow introduction in which the violin’s leaping, recitative-like line is derived from the main theme of the first movement. However, the shadows that have haunted the previous movements are blown away by the jocular, almost naive, principal theme of the ‘Con brio’ firmly in A major. The pace hardly slackens, with cantabile melodies providing contrast until the return of the introduction; thereafter the jollity breaks out once more with the theme set against ever more bravura piano figurations, as when it is accompanied by helter-skelter chromatic scales.

Perhaps an apt summary for the two sonatas can be made in their composer’s own words in a programme note he wrote about the Violin Sonata No 2 in 1950: ‘I am not one of those composers who feels anxious, or indeed able to talk about his own music. Whatever I have to say is said in the music, and if this does not speak for itself, then I have failed.’ In the two violin sonatas Ireland did not fail, but added to the violinist’s repertoire two of the finest British works for the medium this century.