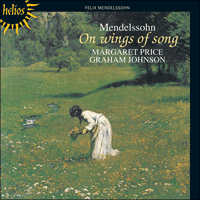 On wings of song

‘A sure candidate for my vocal recital of the year’ (Gramophone)
‘Mesmerising … as is usual, the Hyperion recording is perfectly balanced’ (Classic CD)

Mendelssohn’s reputation has probably fluctuated more widely than that of any other major composer. In his own lifetime he was fêted throughout Europe both as a progressive Romantic and as the heir to the great Baroque and Classical traditions. Schumann dubbed him ‘the Mozart of the nineteenth century’, while for Liszt he was ‘Bach reborn’. But a reaction set in soon after his death in 1847. Though musicians continued to value Mendelssohn (with the notable exception of Wagner, who denounced his ‘complex artificialities’), and his choral works remained staple fare in England and Germany, much of his output began to seem tame to a public intoxicated by the eroticism and apocalyptic splendours of Tristan and ‘The Ring’ and the flamboyant virtuosity of Liszt. In our own century Mendelssohn’s stock has gradually risen again as listeners have sought respite from the febrile, neurasthenic emotional world of late Romanticism. Today we can admit the pomposity and sugary piety of some of the choral works and the fireside sentimentality of the weaker Songs without Words while appreciating his unique vein of fantasy, poetry and pathos, expressed through a technique as refined as Mozart’s. Indeed, in his (at times deceptive) surface polish and his subtle mastery of Classical forms Mendelssohn seems closer to the ideals of the late-eighteenth century than to the more subjective outpourings of his contemporaries – prompting Hans Keller’s remark that he was the nineteenth century’s ‘only supremely natural back-leader’.

Not surprisingly, Mendelssohn’s Classical orientation is reflected in his approach to song-writing. Carl Zelter, his crusty old teacher in Berlin, would have no truck with the new approaches to word-setting being explored by Schubert and lesser Viennese composers. Zelter’s ideal conformed to that of his close friend, Goethe: a symmetrical strophic treatment (that is, with the same music used for each verse) that allowed the poem to speak for itself, with picturesque or suggestive keyboard writing kept to a minimum. The songs of Mendelssohn’s teens and early twenties, especially, tend to follow Zelter’s principles, though in their lyrical grace, harmonic subtlety and sheer finesse of workmanship they transcend anything produced by Zelter and other North German song-writers. Typical examples in this recital are the charming, if phlegmatic, Maienlied (Mendelssohn disregards the darker sentiments of the second verse) and the agitated Geständnis with its volatile dynamic changes. But in another strophic setting, Frühlingsglaube, the verbal repetitions suggest that, as in several later songs, the composer was intent on fitting the words, Procrustes-like, to a pre-existing melodic shape. Mendelssohn’s song has a fetching elan, though it inevitably suffers alongside Schubert’s sublime, wondering setting of the same poem.

At times, though, Mendelssohn’s earlier songs do share something of Schubert’s inspired simplicity and innocence of spirit, as in Frage, whose opening phrase recurs both in Geständnis and in the A minor Quartet, Op 13; or Gruss, with its tolling pedal notes and its magical shift from D to B major at ‘Klinge, kleines Frühlingslied’. But the most vivid and original of Mendelssohn’s earlier songs evoke the supernatural world in which he so delighted. ‘Hexenlied’, with its graphic, virtuosic piano writing, portrays the frenzied goings-on of the witches’ sabbath on the Brocken in music of furious energy, half mocking, half menacing, drawing its power from the insistent repetition of short, hammering phrases. The Heine setting, Neue Liebe, has all the fleet, fanciful delicacy and rhythmic flexiblity of Mendelssohn’s fairy scherzos. But there is a touch of menace in the sudden explosive sforzandi; and as in ‘Hexenlied’, the music for the third verse is newly imagined, with an eerie lull at Heine’s characteristic twist in the final line.

This varied strophic form, with a modified or completely reworked last stanza, is the one Mendelssohn favoured most often in his songs from Opus 34 (published in 1837) onwards. The most famous example, of course, is Auf Flügeln des Gesanges, beloved of swooning sopranos in Victorian and Edwardian drawing-rooms. Though Heine did not, apparently, care for Mendelssohn’s setting, its exquisite langour is perfectly attuned to the mood of the poem, with none of the mawkishness which often afflicted the composer in this vein. Schubert is again challenged in the two Suleika songs, settings of poems by the actress Marianne von Willemer with whom the ageing Goethe had one of his passionate affairs. Ach, um deine feuchten Schwingen, whose broken-chord accompaniment, like that of Auf Flügeln des Gesanges takes its cue from the image of fluttering wings, has a reflective pathos that contrasts strikingly with Schubert’s ardent, aspiring setting; the major-keyed final verse is directly quoted in the more excitable second Suleika song, Was bedeutet die Bewegung?, suggesting that, though they were published under separate opus numbers, the two pieces were conceived as a pair.

In several songs Mendelssohn achieves a telling effect with the slightest of modifications in the final verse. Das Waldschloss, one of two Eichendorff settings published without an opus number, is a variation on the Lorelei theme; and in the third stanza the huntsman’s triumphant ‘Die droben, das ist mein Lieb!’ is mirrored by a fleeting glimpse of the relative major, G, making the closing lines even more grimly ironic. Elsewhere Mendelssohn modifies a strophic structure by the addition of a brief coda, as in the Eichendorff Wanderlied, with its characteristic expansion at the end of each verse, the Tieck Minnelied and the beautiful setting of Geibel’s Der Mond with its luxuriant, deep-toned accompaniment. Finer still is another nocturne, the Eichendorff Nachtlied, originally composed in 1845 but revised in the autumn of 1847 while Mendelssohn was recovering from the loss of his sister, Fanny. Within a few weeks he too would be dead. The insistent keyboard syncopations lend a disquieting edge to the solemnity of the opening stanzas and are then used to build towards a passionate, arching climax at ‘Gott loben wollen wir vereint’. Along with works like the F minor String Quartet, Nachtlied counters the over-facile notion that Mendelssohn’s genius declined irretrievably in later years.

By the 1840s Mendelssohn was more inclined to abandon the strophic song for a loose ABA aria design or, more rarely, a freely evolving through-composed structure. The three-part form of Erster Verlust was prompted by Goethe’s poem, though as elsewhere the frequent repetitions (which would probably have driven Goethe apoplectic) suggest that the composer was accommodating the text to a pre-existing melodic shape. Schubert’s miraculous, bittersweet setting is a virtually impossible act to follow here, though Mendelssohn’s more sophisticated treatment, with its unusually varied textures, has an elegant pathos in its outer sections and a powerful, chromatically intense central climax. In Es weiss und rät es doch keiner the composer pits himself against Schumann who had recently set the poem in his Eichendorff Liederkreis. Again, Mendelssohn’s treatment is the more elaborate, with the first two verses set to a pensive G minor andante and the last two seizing on the image of soaring in an eager but over-insistent G major allegro. If neither of these Opus 99 settings is a completely satisfying response to the poem, the nocturnal water music of Schilflied is one of Mendelssohn’s most perfect songs, with its plangent melodic line and evocative, exquisitely spaced accompaniment (deep pedal points to suggest the motionless pond); and to pick out one detail, note the sense of depth and mystery created by the sudden dip from F sharp minor to D major at ‘im tiefen Rohr’.

If Mendelssohn usually comes off second best when treating the same text as Schubert or Schumann, he composed at least two songs that can stand alongside comparable settings by the greatest composers of Lieder: Des Mädchens Klage, his only song to verses by Schiller, and the Goethe sonnet Die Liebende schreibt. Both songs, significantly, are notably free and flexible both in their rhythmic structure and their overall design. More complex and impassioned than Schubert’s plaintive setting of 1815, Des Mädchens Klage is one of Mendelssohn’s most searching essays in his familiar 6/8 agitato vein, with its turbulent keyboard figuration (suggested by the poem’s opening) and tense, chromatically charged lines. Even finer is Die Liebende schreibt, composed in Switzerland in the summer of 1831 (far earlier than its opus number would suggest), and eclipsing both Schubert and Brahms in psychological penetration. The musical form, like that of Des Mädchens Klage, is entirely dictated by Goethe’s text as Mendelssohn subtly charts each shade of longing and ecstatic agitation. There is an uncommonly wide and expressive range of modulation, and a glorious broadening of phrase at ‘Die einzige; da fang ich an zu weinen’ that perfectly mirrors the girl’s abandoned, sensuous melancholy.