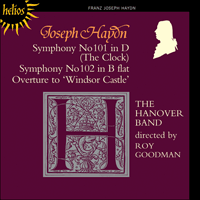 ‘Roy Goodman's Haydn series with the Hanover Band has been an unmitigated pleasure. This is vital and energetic Haydn playing where clarity and crispness are allied to a real flair for capturing the musical character of each movement. These endlessly imaginative performances are among the best of all period-instrument Haydn’ (International Record Review)
‘The playing is stylish and imaginative, the "clock" movement is beautifully paced and the balance of instruments is excellent, allowing the continuo fortepiano not just to fill in, but to make a distinct difference to the sonority’ (Classic CD)

Such was the success of Haydn’s first visit to London for the 1791 and 1792 concert seasons (his stay amounted to some eighteen months) that attempts were made to entice him back from Austria for the following season. Johann Peter Salomon, the German-born, London-based impresario who had whisked him away from Vienna on the earlier occasion was fully expecting his return for the start of the new subscription season at the Hanover Square Rooms in February 1793. But the London Diary: or, Woodfall’s Register for 17 January 1793 noted that ‘Haydn the great composer is prevented from visiting this country as early as he expected, by a polypus in his nose, on account of which he has been obliged to undergo a painful operation, but without the desired success’. But the reasons for his delay seem to have amounted to more than ill-health. On the one hand the political situation in Europe was gradually deteriorating with the continuing repercussions of the French Revolution: the French king Louis XVI was guillotined in January 1793 and the war which would drag on until the Battle of Waterloo in 1815 was just beginning. Meanwhile, on the other hand, he had only been back in Vienna for some six months and had not had enough time to complete enough new music to make another trip so soon seem worthwhile.

A year later, however, although the chaos in France and elsewhere had by no means lessened, Haydn felt well enough to travel again and in January 1794 he set off in a coach lent by his friend Baron van Swieten, accompanied by his servant and copyist Johann Elssler. But Haydn did not anticipate the effects of wartime conditions on his journey and it took him eighteen days to reach London, rather than the fourteen he had planned. As a result, he missed by a day the advertised first concert of Salomon’s new season on 3 February. Instead, the weekly concerts began on the following Monday, 10 February, with Haydn reintroducing himself to London with a brand new symphony, No 99 in E flat. This was the first of three, together with the string quartets of Op 71 and Op 74, commissioned by Salomon for that year’s concerts.

Despite the conventional numbering, the next symphony to appear was No 101 in D major, at the fourth concert of the series on 3 March. Haydn appears to have arrived in the country with only No 99 and the minuets of 100 and 101 complete, suggesting that he must have soon recovered from his tiring journey and settled into his comfortable lodgings in Bury Street, St James, in order to have No 101 ready in a little over three weeks, particularly considering the hectic social life he seems to have led when in London.

As with the previous symphonies for London, numbers 93 to 98, the premiere of No 101 brought a by now familiar storm of acclaim from the London press:

As usual the most delicious part of the entertainment was a new grand Overture [Symphony] by HAYDN; the inexhaustible, the wonderful, the sublime HAYDN! The first two movements were encored; and the character that pervaded the whole composition was heartfelt joy. Every new Overture he writes, we fear, till it is heard, he can only repeat himself; and we are every time mistaken - Morning Chronicle, 5 March

Symphony No 101 opens with a portentous slow introduction in the tonic minor, full of subtle allusions—particularly its opening rising scale—to the themes of the contrasting, even carefree D major Presto that suddenly breaks through the seeming gloom. Yet for once it is the slow movement which gives this symphony its justified fame. Already by 1798 the movement was being published with the nickname ‘The Clock’, derived from the tick-tocking ostinato accompaniment to the Andante’s main theme. The form is unusual, a combination of variation and rondo, in that the recurring main theme never reappears in exactly the same form: on its second return, after the tutti minore outburst, the ‘tick-tock’ is given to the flute and bassoon, more than two octaves apart, with the theme itself lying between the two on the violins—when the oboe joins in we have some 34 bars of quartet for three wind soloists (plus a single appearance by the second oboe) and a single string line—an inspired piece of scoring.

By this stage in his career, Haydn’s minuets were assuming more importance in the symphony and already tending towards the extended, sonata-form scherzos of Beethoven. That of No 101 is no exception with, in this case, an extended trio which has fun with a hurdy-gurdy-like ostinato, doggedly refusing to change its harmony to match that of the soaring flute melody above it—only on its second appearance does the ‘village band’ oblige. Similarly, at the end of the section the horns appear to enter too early with a tonic pedal maintained beneath a dominant chord.

Many commentators have laid claim to the finale of this symphony being Haydn’s greatest—and one can see why. It is almost entirely built out of its opening theme, such that there is no definable second subject, the music being in a constant state of motivic development from the very beginning—even connecting passagework derives from some aspect of its rising and falling scalic figures. With one audacious flash of formal and motivic inspiration after another, Haydn then has the nerve to begin his recapitulation as a pianissimo fugue for the strings, keeping the instrumentation at a minimum until the whole orchestra bursts in for the coda, with one final hesitant moment before a surge of upward-rushing scales brings the symphony to an exuberant close.

By January 1795 it became apparent to Salomon that he would have to cancel his forthcoming season, owing to his difficulty in persuading singers to cross from the Continent at a time of escalating war. Coincidentally, at about the same time the Italian violinist G B Viotti founded a series of Opera Concerts at the King’s Theatre, Haymarket, an enterprise that both Haydn and his impresario joined. At these concerts were performed the last three of Haydn’s symphonies. No 102 had already been composed in the summer and autumn of 1794, presumably with the Salomon season in mind, but was performed instead at Viotti’s first concert on 2 February 1795. It was on this occasion that, during the finale, a chandelier fell from the ceiling, miraculously hurting no one, an event that somehow became attached to Symphony No 96 which has always been known as ‘The Miracle’ in England. Press notices were again adulatory:

… the new Overture, composed by the inimitable HAYDN, was performed in a masterly stile, as it most richly deserved to be. His genius, as we have frequently before had occasion to remark, is inexhaustible. In harmony, modulation, melody, passion and effect, he is wholy unrivaled [sic]. The last movement was encored: and notwithstanding an interruption by the accidental fall of one of the chandeliers, it was performed with no less effect - Morning Chronicle, 3 February

The slow introduction had now become more or less standard practice in Haydn’s symphonies and No 102 is no exception, with, as in No 101, the opportunity taken to hint at the thematic material of the main part of the movement. Indeed, there is a thematic rigour in this movement comparable with the finale of No 101 and, for example, in the bridge to the second subject, the five-note phrase first heard immediately after the opening chord, is taken up as a developmental figure. After the slow movement of No 101, the Adagio here is more straightforward, though the scoring is no less miraculous, with a dream-like quality imparted by its chordal washes and seemingly wayward triplet movement. Similarly, the Minuet shows a different side of Haydn’s personality from the relative dignity displayed in that of No 101; here the feeling is altogether more rustic and urgent, with contrast provided by the lightly-scored, wind-dominated trio. The finale is one of Haydn’s most humorous and lighthearted sonata-rondos, with its musical roots in Italian opera buffa as much as in symphonic tradition, and with a jokiness that well and truly cocks a snook at the seriousness of the early movements.

Two months after the premiere of Symphony No 102, the Prince of Wales (later George IV) married the Princess of Brunswick and among a whole string of musical events to celebrate the occasion was an elaborate masque, Windsor Castle, composed by Salomon and staged at the Theatre Royal, Covent Garden, during April 1795. Unusually, the overture for these performances was not by Salomon but by Haydn (though Salomon later added one of his own). This ‘Overture to an English Opera’, as it came to be known, drew admiration in its own right and Haydn later used it for his then unperformed Orpheus opera, L’anima del filosofo (1791, originally intended for London performance that year)—indeed, considering the similarity of themes in the overture and opera, it may well date back to the time of the opera itself. The overture is in what was to become the standard form of a slow introduction leading to a fast main section, here a joyous C major Presto.

The material for these performances was prepared by myself from the editions published by the Mozart-Haydn Presse and Henle Verlag. Articulation and phrasing, dynamics and rhythms have all been supplemented where necessary, according to eighteenth-century principles, and many errors have been corrected.

The Hanover Band performs on period instruments at a pitch of A = 430Hz, and since I firmly believe that Haydn either played or expected a keyboard continuo instrument, I direct symphonies 1 to 92 from the harpsichord, and symphonies 93 to 104 from a Broadwood fortepiano, with the violins divided on opposite sides.

All repeats are observed as a matter of course (unless there is an obvious dramatic reason for not doing so) and in those symphonies where the parts for trumpets and drums appear to have been added later or composed as an alternative to the horns (often ‘in alt’), their services have been dispensed with. The tempo markings which Hummel and Czerny gave to several Haydn symphonies have prompted me to reassess particularly the speed of Andante and Minuet movements, which are nowadays often performed much too slowly.