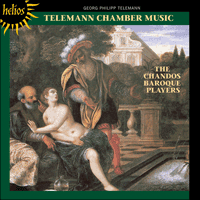 ‘A thoroughly enjoyable excursion into the most fertile territory of Telemann's chamber music’ (Gramophone)
‘This is one of my all-time favourite recordings and I'm so happy to have it on CD’ (Early Music Review)
‘One of the best records of early music that I have heard lately, and really something special’ (Hi-Fi News)

Like any self-respecting German composer of his time, Georg Philipp Telemann (1681–1767) became thoroughly conversant with the stylistic conventions of other European countries, notably those of Italy and France. Born before Bach and Handel, with both of whom he was on friendly terms, and remaining musically active well into the 1760s, Telemann not only lived through the declining years of the Baroque period but he also witnessed the emergence of a new spirit of rationalism which eventually flowered into the Enlightenment. Although by 1760 he was nearly eighty years old, Telemann was not content with being a bystander to musical development, and in the remaining seven or so years of his life he composed several works, some of them ambitious in design and spacious in dimension, in which we can sense the strong attraction which he felt towards a new artistic outlook and new means of expression.

By comparison with the products of his old age, the bulk of Telemann’s chamber music, which mostly belongs to earlier periods in his long career, is conventional in its language and its form, but we should guard against any assessment which views it merely as fluent. Telemann’s sonatas, trios and quartets bear the stamp of a composer whose knowledge of the instruments for which he is writing is both tonally imaginative and technically informed. Indeed, from his own account we know that he was a proficient player of the flute, oboe, violin, recorder, harpsichord, viola da gamba, and other instruments, too. The Hamburg writer and composer, Johann Mattheson, who knew Telemann but who, on occasion, nevertheless was a stern critic of his work, conceded the excellence of his chamber music. While criticising the indifferent means by which several of his contemporaries imitated foreign styles, Mattheson reckoned that Telemann’s trios, ‘though something Italian is mixed in, nonetheless flow very naturally and in the old French manner’.

Whilst the stylistic traits which Telemann drew from French and Italian sources are in keeping with those of his German contemporaries, the influence of Polish folk music provides an altogether more personal ingredient to his music. His brief period of employment with Count Erdmann II of Promnitz at Sorau in Poland (1705–6) exposed the young composer to Polish and Hanakian music ‘in its true barbaric beauty’, as he was later to describe it. ‘An observer could scoop up enough ideas in eight days to last a lifetime. I have, in my time,’ Telemann remarked, ‘written various large-scale Concertos and Trios in this manner, which I clad in an Italian coat with alternating Adagios and Allegros.’ Besides French and Italian influences, the Polish element is one that we frequently encounter in Telemann’s large and smaller-scale instrumental writing and which provides both a distinctive and distinguishing quality.

Trio Sonata in D minor for treble recorder, violin and continuo
Telemann and Handel were two of the most skilled composers for the treble recorder during the late Baroque. Both understood the character of the instrument, its limitations and its strong points, and wrote affectingly, often brilliantly for it. The Trio Sonata in D minor for treble recorder, violin and continuo exists in a manuscript at The Royal Conservatoire of Music in Brussels. In the opening movement the two melody instruments share the initial thematic material whilst the recorder, especially, is given extended passagework exploring both the versatility of the instrument and its performer. The Adagio is mildly plaintive, never emerging from the home key of D minor. Both the following Allegro and Presto movements are vigorous and animated; in the Presto we can detect a Balkan folk-music flavour in the strong unison passages of the two upper instruments.

Trio Sonata in G minor for oboe, violin and continuo
Two sources exist of this fine sonata, one in Darmstadt and the other in Dresden. It falls into the slow-fast-slow-fast pattern for which Telemann showed a preference in his sonatas and, up to a point, in his concertos too. The opening ‘Mesto’ has a wistful character and a seriousness which utterly confounds the all-too-frequently voiced opinion that Telemann was capable only of lightweight utterances. The following Allegro is tightly constructed, with predominantly imitative phrases in the two melody parts.

The Largo is framed by an eight-bar Andante whose affecting language illustrates Telemann’s love of the fugitive, of the indefinable, in a meandering sequence of modulations and suspensions. The finale, a Vivace, is an elementary ‘rondo’ whose initial recurring syncopated figure, presented first by the oboe, determines the dance-like character of this individual movement.

Quartet in F major for treble recorder, oboe, violin and continuo
This work, whose original key is G major, belongs in a manuscript collection in the Hessian State Library at Darmstadt. All the music in it dates from Telemann’s Frankfurt period, 1712 to 1721. The opening Vivace is an animated movement in 12/8 measure. Two thematic ideas converse with one another; the first is introduced by the violin whilst the second, more lyrical idea is presented by treble recorder and oboe. The contrast afforded by Telemann’s interweaving of these two elements is both interesting and effective.

The gentle Grave has some lyrical effects as, for example, the limpid dotted quaver motif in which the three melody instruments enter in imitation; but the opening melodic statement, in crotchets, is also attractive, with opportunities for embellishment. The Allegro finale, in binary form, begins with a lively unison motif in the three upper instrumental parts, followed at one bar’s interval by the bass. This is a forward-looking movement which brings the quartet to a vigorous conclusion.

Quartet in G minor for violin, oboe, viola da gamba and continuo
The unusual grouping of instruments in this work is indicative of Telemann’s fascination with sonority, which seems to have remained with him throughout his life. The Quartet in G minor for violin, oboe and viola da gamba exists in a manuscript in the Hessian State Library at Darmstadt. The four-movement structure is that of the Italian ‘sonata da chiesa’ into which Telemann injects both virtuosity and individuality. In each of the movements the viola da gamba is an equal partner with the oboe and violin; indeed, Telemann seems particularly to have concentrated his energy in creating a virtuoso role for this longest-surviving member of the viol family. That Telemann held this instrument in affection we cannot doubt, since he included two fine solo sonatas for it in his musical periodical, Der getreue Musicmeister (1728/29), as well as composing a suite for viola da gamba and strings and two further sonatas in one of his most mature chamber music collections, the Essercizii Musici. The delicately restrained Lento leads to a lively Italianate Vivace whose oboe ‘cantabile’ floats above the busier figures of violin and viola da gamba. The brief Adagio has a strong modulatory element as the parts dovetail into one another, whilst the Allegro finale, with its restless and virtuoso viola da gamba part, remains more firmly rooted in the tonic key.

Trio Sonata in F major for treble recorder, viola da gamba and continuo
This trio sonata comes from the collection of twelve solo sonatas and twelve trios which Telemann published in Hamburg under the title Essercizii Musici (c1739). The treble recorder part is, perhaps, one of the finest surviving testaments to Telemann’s unerring skill in exploring sonorities in an instrument of which he clearly had deep knowledge. In each of the three movements the recorder remains in those regions of its tessitura which enable it to speak articulately and authoritatively in a chamber music context and, of course, the softly-spoken viola da gamba provides an ideal partner. Most of the writing is closely imitative and Telemann’s chief concern is, perhaps, with sounds rather than musical intricacy. The blend of recorder and viola da gamba is potent in the ‘Mesto’ (mournful) slow movement, where Telemann’s skill in handling these instruments creates a brief but affecting elegy.

Concerto in A minor for treble recorder, oboe, violin and continuo
Telemann never travelled to Italy but, in much the same way as Bach, acquired his knowledge of Italian music through manuscripts circulating German courts and from visiting Italian musicians. Few concertos of Telemann so wholeheartedly embrace the sonorities and techniques of the late Italian Baroque as this concerto which is preserved in a manuscript in the Hessian State Library at Darmstadt. Its form is that of the chamber concerto where each part, other than the continuo, is obbligato.

In the case of the present work Telemann achieves effective sonorities through his informed writing for three tonally contrasting solo instruments: treble recorder, oboe and violin. Such exploitation of tonal colour was a feature of Italian Baroque music and of Venetian music in particular, and a close analogy exists between this concerto and the many examples of Vivaldi’s chamber concertos for mixed obbligato instrumental ensemble. Telemann, unlike Vivaldi, however, remains faithful to the four-movement layout of the ‘sonata da chiesa’.

The opening Adagio is characterised by a gently undulating motif introduced by the oboe and taken up first by the violin, and lastly by the recorder. The textures preserve a delicate transparency throughout. The following Allegro is fugal with episodes of vigorous passagework both in the solo and continuo parts. In the Adagio third movement (C major), Telemann achieves a notably tender means of expression both through delicately contrived sonorities and an affecting interweaving of parts.

The Vivace finale is the most extended of the movements and, perhaps, the most Italian. Its rhythmic energy and unison tutti figures call Vivaldi to mind, as indeed do the frequent episodes of virtuoso passagework for the three soloists. Distinction between ‘solo’ and ‘ripieno’ is more marked here than in the previous Allegro, each player being given clearly defined solo episodes. In the last of these, for violin, Telemann takes Italianate string figurations to heart in a dazzling display of arpeggio sequences outdistancing in length, for instance, almost any comparable example by Vivaldi. A full recapitulation of the ritornello brings this fine work to a conclusion.