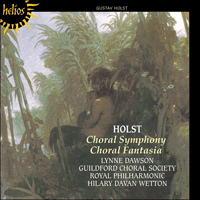 ‘Neither of these imaginative works impressed critics, performers or audiences at their premieres, so they languished. With Davan Wetton drawing a first-class performance from the choir and the RPO, plus a splendidly detailed and spacious recording, home audiences can now appreciate their full worth’ (BBC Music Magazine Top 1000 CDs Guide)
‘First class … home audiences can now appreciate the full worth of these imaginative works’ (BBC Music Magazine)

Although written some six years apart, the two works on this compact disc form the joint culmination of Holst’s mature art as a choral composer. He had been interested in choral music from his early years and, as a student at the Royal College of Music, composed several short choral pieces and also took part in a bicentenary performance of Purcell’s Dido and Aeneas which greatly influenced his approach to the problems of setting the English language to music. On leaving college, one of his first published compositions was an Ave Maria for double female chorus, demonstrating a mastery of vocal writing, and his practical knowledge of female voices was further developed after he joined the staff of St Paul’s Girls’ School in Hammersmith in 1905. His work at Morley College and the Thaxted festivals gave him a valuable insight into the possibilities of writing for amateur singers, resulting in such works as the four groups of Choral Hymns from the Rig Veda, the Two Psalms, Six Choral Folksongs, This have I done for my true love, and the magnificent Hymn of Jesus of 1917. He also had the knack of writing a simple hymn tune, and his carol In the bleak midwinter quickly became a firm favourite.

By 1923 Holst had acquired a substantial reputation as a choral composer and was becoming much more widely known because of the burgeoning popularity of The Planets. He was therefore a natural choice for the organisers of the Leeds Triennial Festival who were looking for a new work for their 1925 festival. Holst accepted the commission and for his text turned to a volume of Keats’s poetry which his daughter Imogen had given him, choosing various passages which prompted his musical imagination, planning to set them as a four-movement choral symphony. For the introduction and first movement (‘Invocation to Pan’ and ‘Song and Bacchanale’) he chose stanzas from the chorus of shepherds in Endymion, and from the Roundelay in Book IV of the poem. The second movement is a setting of the entire Ode on a Grecian Urn, while the following Scherzo uses most of ‘Fancy and Folly’s Song’, one of the short pieces grouped under the title Extracts from an Opera. For the finale Holst chose the lines ‘Spirit here that reignest’ which Keats wrote in a copy of Beaumont and Fletchers’ plays, followed by extracts from the Hymn to Apollo, most of the Ode to Apollo, and the ode Bards of Passion and of Mirth. The structure of the work thus follows the outline of the traditional four-movement symphony (with slow introduction), with the choral parts fully integrated into the texture instead of being added on to the orchestra as an extra element.

The work begins with a hushed chanting, reminiscent of the invocations of the gods in the Rig Veda hymns, over a mysterious fugal background in the orchestra. A viola solo introduces the Song (soprano solo), which is followed by the Bacchanale, a lively movement in 7/8 time whose harmony and melody are largely derived from the interval of a perfect fourth. This is followed by the ‘Ode on a Grecian Urn’ in which Holst captures the stylised scenes depicted on the urn by using archaic open fifths and fragmentary pulsating woodwind figures. The Scherzo is a lightweight, swiftly-moving piece recalling the fleet-footed ‘Mercury’ of The Planets, posing a considerable challenge to the singers as they fly through the patter of their words via chromatic phrases and bitonal chords, while the Finale is episodic in construction and ends with a quiet postlude instead of a triumphant symphonic climax.

The First Choral Symphony was given its premiere in Leeds Town Hall on 7 October 1925, conducted by Albert Coates with Dorothy Silk as soloist, and it was repeated three weeks later in London’s Queen’s Hall by the same performers. The juxtaposition of unrelated extracts from Keats’s poems offended literary purists, while music critics poured scorn on Holst’s efforts, particularly deriding his failure (in their view) to inject enough debauchery into his Bacchanale. Singers found the work difficult, and there was little enthusiasm from audiences, so that after the first performances the work soon fell into neglect. In fact, from this point onwards, Holst’s popularity began to wane, so that by the end of the decade he was no longer the target of those autograph-hunters who had mobbed him outside Leeds Town Hall in 1925.

But he was still held in high regard by the musical world and in 1930 Herbert Sumsion, organist of Gloucester Cathedral, asked him to write a work for the Three Choirs Festival, and to incorporate a concertante organ part which he himself would play. The result was A Choral Fantasia, a setting of Robert Bridges’ Ode to Music (originally written for the 1895 commemoration of Henry Purcell in which Holst had participated as a student), first performed in Gloucester Cathedral on 8 September 1931 with Dorothy Silk as soloist, conducted by the composer.

In this work Holst raised the role of the organ from the level of mere accompaniment to become an expression of transcendental and powerful mystery, while the chorus supplies a human response to the words of the poem. After an introductory soprano solo the orchestra introduces a pulsating march-like passage which reappears at various points throughout the work. The organ then begins a long and slowly evolving fugal section, again leading to the pulsating rhythm which soon subsides to allow the chorus to begin their text: ‘Rejoice, ye dead’ which, typical of Holst, is enunciated in a mood of quiet contemplation rather than of brash exultation. After a repeat of the opening solo phrase, this time by the male voices of the chorus, the music builds to a climax and then comes to an end not in an atmosphere of universal jubilation but with a calm solo confirming a mood of peace and meditative tranquillity.

Like the First Choral Symphony, this new work did not please the critics, but Holst’s close friend Vaughan Willlams found the performance moving, thus providing the composer with welcome moral support, as the Fantasia was not subsequently widely performed and was rejected by the BBC as being unsuitable for the technologically limited broadcasting of those days. Now, over sixty years later, the development of digital recording has enabled the full splendour and expressiveness of Holst’s writing to be properly conveyed to the domestic listener for the very first time.