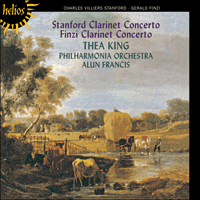 ‘A superb reading. Such easy virtuosity enhances the happy, carefree atmosphere’ (Gramophone)
‘Thea King's shaping and colouring of Finzi's almost improvisatory melodic lines is more deeply persuasive than any other recorded version I know—touching without being sentimental’ (BBC Music Magazine)
‘A definitive performance’ (The Penguin Guide to Compact Discs)
‘A new entry in this year’s top 300 … full of ravishing pastoral scenes played beautifully by Thea King. You surely couldn’t get a truer representation of these concertos which both deserve better recognition’ (Classic FM Magazine)
‘The original release of these concertos was long overdue and unanimously praised on both sides of the Atlantic. Its re-emergence at a moderate price is not only welcome but also deserving of high praise and an appropriate pedestal in our Classical Hall of Fame’ (Fanfare, USA)
‘An inspired coupling. One of the year's best releases’ (Classical Music)

Central to any study of English music at the beginning of the twentieth century must surely be the influence of the two most prominent composition teachers of the time, Frederick Corder at the Royal Academy of Music and Charles Villiers Stanford at the Royal College of Music. Corder, a Wagnerian, aimed at being both permissive and progressive in his teaching, but arguably left his pupils without real direction or discipline. Stanford’s great reputation rested on a method which was neither undisciplined nor liberal. He was, in fact, intolerant of anything more modern than Brahms.

This fundamental dichotomy was of great significance in the development of English music until the 1940s, since it seemed to divide a whole generation of English composers. Corder’s pupils were Bantock, Holbrooke and Bax, whilst Stanford taught Holst, Vaughan Williams, Ireland and Bridge. However, Stanford the composer must also be considered apart from his role as a legendary teacher. Today less is known of his works, many of which were not published until many years after their composition. The Clarinet Concerto for example was not generally available until 1977, 73 years after its premiere.

Stanford was born in Dublin in 1852, the son of a legal officer and, as is so often the case, a keen amateur musician. His first known compositions were written at the age of eight (a march of his was played at Dublin’s Theatre Royal), and at the age of eighteen he entered Cambridge where, three years later, after gaining his MA and Doctorate, he became organist of Trinity College. Later he was appointed conductor of the University Music Society, giving many first performances, particularly of the music of Brahms, for whom he had already gained a great admiration. He spent several of his leaves of absence from Cambridge with Brahms, and became a constant advocate and friend to him. His collaboration with Tennyson in 1876 on a production of Queen Mary at the Lyceum Theatre was to enhance his reputation. Three years later he was to set a new standard in Anglican church music with his service known as ‘Stanford in B flat’, and its thematic uniformity and individual material ensured Stanford of a high regard in English musical life. The influence of his Irish background colours much of his music, whether obviously in the six Irish Rhapsodies, the ‘Irish Symphony’, the opera Shamus O’Brien, or by making its presence felt in the Anglo-Germanic style of his other compositions. The second movement of his Clarinet Sonata (1918) or the finale of the Clarinet Concerto (1902) are pointed examples.

Stanford first wrote for the clarinet as early as 1880 (Three Intermezzi, Op 13), eleven years before Brahms wrote his four great works for that instrument. His ‘Concerto in one movement’ was written for Richard MühIfeld, who had premiered the Brahms works, but this dedication was later scratched from the autograph full score when Mühlfeld refused to play the work. Its first performance was given at Queen’s Hall in London on 20 June 1904 by Charles Draper for the ‘Philharmonic Society’, conducted by Stanford. Frederick Thurston, a pupil of Draper who was to become Britain’s leading clarinettist for over twenty-five years, played the concerto as a twenty-one-year-old student at the Royal College in 1922, under the watchful eye of the composer. A letter from Stanford to Thurston dated that year attests to the composer’s enthusiasm for the young soloist’s performance; warm words indeed from a man who was grudging in his praise. Thurston went on to give many successful performances during the following decades.

Despite its title, the work is clearly in three movements, the first two linked by a simple two-bar modulation, the second and third movements being bridged by a developed version of the work’s opening theme. Stanford begins the concerto with two strident, almost march-like tuttis, the clarinet answering each with a reflective triplet figure which in the second instance gives way to the buoyant rhythmic first theme. Poignant dialogue between the clarinet and various parts of the orchestra leads to the second theme. This is altogether more peaceful than the restless opening music. The clarinet is in quieter mood, accompanied by ever-present triplet figures. The march-like music reappears only to be guided by the clarinet into the quiet preparation for the second movement. It opens with a glorious (almost Bruckner-like) chorale for horns and strings, which is taken up by the clarinet and woodwinds, moving easily into the veiled colours of the movement’s second theme, a rising figure from the clarinet accompanied by lower strings. The orchestra is allowed to develop this idea while the solo part comments wistfully over the orchestra. Four bars from the opening chorale lead to a dramatic recitative for the clarinet, which finally falls away to the return and reworking of most of the second movement material. Inspired touches such as the clarinet playing the chorale theme over a shifting woodwind triplet figure serve to show Stanford’s complete mastery of orchestration. Just as the slow movement comes to its final resting point the opening music of the concerto re-emerges to take the listener with great force into the Finale.

No more Germanic drama here but a fine, lilting (and surely Irish) rondo-like theme with lots of spring in its heel and plenty of virtuosity for all concerned. One or two darker moments reflecting on the earlier movements fall to change the infectious mood of this Finale, which maintains its high spirits to the end of the concerto.

In preparing for this performance of the concerto I consulted the two published scores only to find 116 discrepancies between them. This was not simply a question of dynamics. Notes and whole passages showed great variance between the two scores. I therefore worked not only from Thurston’s material but also from the autograph full score now owned by the Royal Academy of Music, to whom I am most grateful.

The composer-performer relationship has always been a fascinating one and in preparing this concerto I came upon an example of this vital contact in the letters from Gerald Finzi to Frederick Thurston. The first, dated 2 October 1948, reads:

Dear Thurston,
Here is a difficult thing to write about. I was asked to do another work for the Three Choirs at Hereford next Sept. A work for strings, without a soloist, was specified, for the Friday morning Sept. 9th. But for some time I’ve wanted to do a short Concerto for Clarinet and strings and eventually P.C. Hull agreed to let me have my way. The first thing is to know whether you will take an unwritten work on trust. Naturally, if you are willing to do it I should be as grateful as I should be delighted.

Despite his established reputation this letter provides touching proof of the composer’s modesty in approaching the foremost clarinettist in the country. The many letters which followed show how the composer and soloist worked side by side for many months to perfect the final work.

Finzi was born in London in 1901. His childhood had been unhappy and unsettled, probably due to the early deaths of his three elder brothers and his father. Between 1918 and 1922 he studied composition with Sir Edward Bairstow, and he also studied with R O Morris for a brief period in 1925. Finzi was a shy and introverted young man, and held only one musical post, that of Professor of Composition at the Royal Academy of Music from 1930 to 1933. His career was spent outside the ‘establishment’, combining his work as a freelance composer with his work/hobby as an expert apple-grower.

After the Second World War (which he spent working for the Ministry of War Transport Department) he settled with his family at the home near Newbury which he had built with his wife Joy in 1939. These post-war years proved to be Finzi’s richest period of musical composition. He had developed a delicate individual style through works like Dies Natalis, the Ode to St Cecilia’s Day (premiered by Boult in 1947) and of course through his many songs. As the conductor of The Newbury String Players, Finzi had developed an affinity for, and an understanding of, the nuances of the string orchestra. Perhaps for this reason many of his works contain divided-string writing, the Clarinet Concerto being an especially good example.

The letters of 1948/9 to Thurston (now owned by his widow, Thea King) show Finzi’s desire to write well for the solo instrument, and Thurston must have provided him with just the kind of expertise needed to accomplish this. The first performance of the concerto took place on 9 September 1949 at the Three Choirs Festival with Finzi conducting.

It opens with a strong outburst from the orchestra, the bass line constantly rising to twist the harmonies in new directions. The first entry of the clarinet pays little heed to this introduction, the solo part rather preferring to move things along in a more pastoral way. Two more attempts by the strings to add tempest to the movement fail to stir the clarinet, which calms the orchestra down to a rippling accompaniment, so reminiscent of Finzi’s songs. An orchestral climax brings the movement to what was originally its final eight strongly stressed bars. After the first performance Vaughan Williams persuaded Finzi to precede these final bars with a cadenza which allows the clarinet to reflect on both the turbulent and gentle moods of the first movement.

The second movement begins quite magically with first and second violins answering each other in plaintive mood, the clarinet adding two distant cadenzas. This opening motif is taken up to form the main material of the slow movement which builds up bar by bar to the return of the main theme in all its power and full harmonic strength, The clarinet guides us through the coda, again based on the same motif, and the movement ends on a rising figure which, as it comes to rest, fades away to nothing.

The Finale begins with a jaunty eleven-bar introduction before the clarinet enters with a lilting tune in the best English folksong style. The middle part of the movement changes pulse (3/4 as opposed to the earlier 2/2 melody) and Finzi uses this change of stress to bring in gentler themes which contrast well with the earlier virtuoso clarinet writing. The first tune soon returns, however, and through his reworking of this earlier material the composer guides us by a slowing down of the tempo to the sublime re-entry of the clarinet’s first melody from the beginning of the concerto. An attempt by the strings to slip back into the folk-tune music is halted by the clarinet as it insists that the concerto ends on a series of brilliant flourishes.