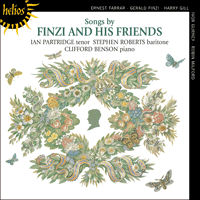 Songs by Finzi and his Friends

When Gerald Finzi died in September 1956 he left some two dozen completed songs. A handful he had just written; others dated from the 1940s, a few back even from the twenties. He had not published them as they were finished because he wanted to wait until he could gather enough for related groups. Finzi was a practical man and knew that a single song, unless the composer’s name guaranteed its sale, or it was taken up by a popular singer, could easily be overlooked. Indeed, he would dearly have liked to edit an anthology of the ‘lost’ songs, generally unknown, that he possessed and admired. (Among them would have been Gill’s ‘In Memoriam’ on this recording.) Finzi’s collection of poetry, now in Reading University Library, though catholic, is personal and valuable for exactly the same reason. He treasured the small perfect lyric for its own sake, even if it was not part of a larger output; and he was always ready to act for his beliefs.

During his life he published three sets of songs for voice and piano to Hardy’s poems: A Young Man’s Exhortation (1933), Earth and Air and Rain (1936) and Before and After Summer (1949). Only the first is a true cycle, a sequence in thought. The other two are sets, grouped round one poet, not one idea. So after his death it was fairly easy to arrange the unpublished songs—the Hardy in Till Earth Outwears for high voice and I Said to Love for low, both published in 1958, and the two on this record to various poets, published in 1965. Finzi’s last work, the Cello Concerto, had reached the round number of Opus 40, but in his personal catalogue he had left two blanks, pencilling in just ‘miscellaneous songs’, so the four sets were allocated to these numbers, the Hardy to Op 19, the two here to Op 13.

The song ‘To a Poet’ held special significance for Finzi, for it carried his message as a composer. He probably wrote it in the 1920s. When he and his wife Joy built their house at Ashmansworth he buried a copy under the porch; and he revised it early in the war, putting his affairs in order. He sent copies of unpublished songs to a friend:

I only hope you won’t mind being turned into a dumping ground. You may wonder at such a curious selection, but it’s just what I happen to have, and it might mean a little something saved from the wreckage if something happened here … ‘Oh fair to see’ is negligible. ‘Only the wanderer’ written in 1925 is a bit better. I like ‘On parent knees’ a lot, but the only really good things included are ‘June on Castle Hill’, ‘Channel Firing’ …

and a year later, with another package:

… also ‘At a lunar eclipse’ and ‘To a poet a thousand years hence’ (don’t judge this until you’ve heard it played by me!).

He drew up his catalogue in July 1941, and when he brought it up to date ten years later he ended the preface with words which match Flecker’s:

I like to think that in each generation may be found a few responsive minds, and for them I should still like the work to be available. To shake hands with a good friend over the centuries is a pleasant thing, and the affection which an individual retains after his departure is perhaps the only thing which guarantees an ultimate life to his works.

Also to that dark early wartime belongs ‘June on Castle Hill’ to the poem by F L Lucas (1894–1967). Finzi used to quote Lucas that ‘at Munich we sold the Czechs for a few months grace, but the disgrace will last as long as history’, and in the hideous summer of Dunkirk, when day after day the sun shone warm and the news grew worse, Finzi, unable to work or sleep for the threat to civilization, suddenly and quickly set Lucas’s vision of the peaceful, flowery old fort under a sinister sky.

The ‘Cecilia’ poem by George Barker (1913–1991) is the only one Finzi did not initially choose to set. In 1947 the BBC commissioned six poets each to write a poem specially for musical setting, sent these anonymously to half a dozen leading composers, and asked them to set one and answer questions about their choice. A programme was to be built from the result. Finzi, at the time deep in composing his ode For St Cecilia, thought poorly of the idea and of the collection, but must have enjoyed the irony of rejecting St Cecilia in words very different from Blunden’s celebrating her. He thought Barker’s poem had something of the magnificence and fury which one associates with, say, Dylan Thomas, and it roused him to dramatic, bitter music.

The subject of words for music he considered too serious to be dealt with by questionnaire and refused to answer it—which was just as well, as he was the only composer to fulfil his song contract. So the BBC programme foundered!

Of the seven songs in Oh fair to see, the first five are early; the Hardy, of 1929, may have been intended for an earlier published set. ‘Oh fair to see’ is far from negligible, though it is one of Finzi’s few songs which other men could have written. ‘As I lay’ of 1921, filled with the sun and the curve and sound of birds, is delicious. ‘Only the wanderer’ was Finzi’s one Gurney setting, and is finer even than Gurney’s own. (With the poet-composer Ivor Gurney we reach a spring of Finzi’s life and art. Gurney’s song ‘Sleep’ was published in 1920. Finzi heard it that year; it captured his heart, and so began his long patient struggle to bring Gurney’s work to wider recognition. ‘The Salley Gardens’ and ‘Hawk and Buckle’ were both published in 1938, largely at Finzi’s instigation. He was amused to discover that John Doyle was a pseudonym for Robert Graves.)

‘To Joy’ (1931) introduces another friend, Edmund Blunden (1896–1974). Finzi knew that the ‘babe beloved—thrust out alone’ was Blunden’s own child; and he knew Suffolk too, where Blunden then lived. Some see in the great arch of this magnificent song, and in the sullen heavy chords, the wide landscape and brooding clouds of an East Anglian storm. By the time Finzi composed ‘Harvest’ he and Blunden had met, collaborated on For St Cecilia and a partsong, and worked together sifting Gurney’s manuscript poems. Finzi hoped to complete a Blunden set, but ‘Since we loved’ (August 1956) was to be his last song. Had he known it was to be, he could not have bade a more perfect farewell.

Finzi was a firm, constant friend. He and Robin Milford (1903–1959) met when they both had early works performed in the same concert in 1928. Milford, the son of Sir Humphrey Milford, the head of Oxford University Press, studied with Holst, Vaughan Williams and (like Finzi) R O Morris, then spent much time teaching. He found life hard but composing easy. ‘If it’s ever spring again’ and ‘The Colour’ were written in 1938 when the Milfords were living near the Finzis. Earlier that year Milford had been poorly and depressed. Finzi’s encouragement meant so much to him that when the clouds lifted and he could compose again he dedicated ‘The Colour’ to ‘Gerald Finzi whose own settings of Hardy are at once my delight and my despair’. In fact the song is individual and gripping, a ballad whose spare accompaniment points the repeated melody through each question to the final shocking answer. Milford’s wife was a singer, and his two other songs, examples of what Finzi called his ‘care-free, delight-full art’, are dedicated to her.

Ernest Farrar (1885–1918) was Finzi’s first composition teacher. He studied with Stanford at the Royal College of Music, and Finzi first heard of Vaughan Williams, Marion Scott and Ivor Gurney from him. With Farrar there was to be no lifelong friendship, for he was killed within days of reaching France in 1918. Though he composed a fair amount, he is known nowadays, if at all, by a song or two. ‘O mistress mine’ is a reminder of the merry, beguiling side of this teacher, young enough to enjoy striding across the moors with his pupils. Finzi was not alone in his devotion.

Percy Dixon (1898–1973) and Harry Gill (1897–1987) met at school in Harrogate where Farrar was the organist at Christ Church from 1912, and where the Finzi family settled. Like Finzi a year or two later, Dixon and Gill studied with Farrar. Dixon went on to become a journalist with the Yorkshire Evening Post and published some poems. Gill went into the Civil Service and as an amateur composed songs, piano, and organ music. In one song, Farrar, Finzi, Dixon and Gill all meet: ‘In Memoriam’, a haunting stroll through half-lights, commemorates ‘one who went a-soldiering’, and finds at last its place in a Finzi anthology.

One other friend is represented on this record—the artist Richard Shirley-Smith (b1935) who designed the front illustration (which is considerably reduced in size from its original LP manifestation).