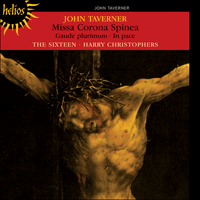 Taverner’s three festal Masses (Gloria tibi Trinitas, Corona Spinea and O Michael) represent a high point in the development of that uniquely English genre. Each is scored for six-part choir with the high trebles so characteristic of English music of this period, and is constructed over a cantus firmus. The occasion for which Corona Spinea was written cannot be identified with certainty, for while its title suggests a connection with the Feast of the Crown of Thorns, such an event is not known to have been widely considered of major importance in the Sarum calendar. The origin of the cantus firmus that provides its structural framework remains obscure, as does its date of composition; unlike Gloria tibi Trinitas, it does not form part of the original layer of part-books compiled for use at Cardinal College in the late 1520s, but was added somewhat later by a subsequent owner, William Forrest, a petty canon at the College. As the longest of Taverner’s settings, it was clearly conceived for an elaborate ceremony involving a large choir with boys of exceptional skill; the treble part is consistently more florid than the others.

Corona Spinea conforms with the established English tradition in that it comprises only four movements, a result of the Sarum rite’s custom of performing the Kyrie troped (that is, with the addition of extra words, according to season) to plainchant. Each movement is laid out to approximately the same length, the Sanctus and Agnus Dei containing more extensive melismatic writing than the Gloria and Credo (part of whose text is omitted, again following local convention). The cantus firmus is deployed in the tenor, where it provides the foundation both for a web of constantly shifting vocal colours in the full sections and also for some of the more delicately scored reduced-voice passages. As it invariably moves in longer note values, the cantus firmus often acts as a pedal point for the other voices to decorate with motivic material. While imitative writing plays a role of some significance especially in the more syllabic full sections, many of the intervening duets and trios are characterised by abstract figuration, sequential ostinato patterns that are sustained and unfolded over lengthy spans with a compelling logic unsurpassed by Taverner himself, and rarely to be found outside the works of Josquin.

Though the overall compass of Corona Spinea extends over the usual twenty-two notes, the disposition of the six voices differs from that of Taverner’s other two festal Masses. Instead of two countertenors, it has two bass parts of slightly different tessitura whose function is more often to support the cantus firmus than to participate fully in the imitative texture. Taverner was able to exploit the contrast between the top and bottom parts to spectacular effect at moments such as ‘Et expecto’ (Credo) and at the opening of the Agnus Dei I. The division of the trebles into two equal parts (a device known as gimel, after the Latin gemellus, twin) in the Benedictus creates an exquisite sonority, only surpassed by the double gimel (divided trebles and means) of Agnus Dei II, which, as in Gloria tibi Trinitas, seems to encapsulate the heart of the work.

The function of Marian antiphons such as Gaude plurimum was devotional rather than liturgical; their performance after the end of the office of Compline was written into the statutes of various educational foundations such as Eton College, King’s College, Cambridge, and, in 1525, Cardinal College, Oxford, where antiphons to the Trinity and to St William of York were specified in addition to the customary Marian ones. Judging by the number of sources in which it is preserved, Gaude plurimum was held in especially high regard in the sixteenth century. Drawing on traditions established some decades earlier, Taverner generated a musical structure out of the contrast between passages scored for two or three voices and those for sonorous five-part choir, and thereby lent a sense of direction to this extended and effusive text. Much of the writing is imitative in style and concentrated in manner, with melismas generally being reserved for the conclusion of each section.

Taverner’s setting of the Lenten respond for Compline, In pace, is scored for mean, two countertenors and bass: in the copyist’s words, ‘three men and a child’. It is based on the plainchant, which appears in the polyphonic sections as a cantus firmus in the top part.