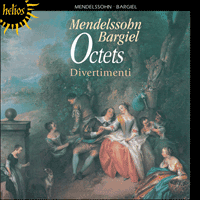 ‘Divertimenti give a brilliant, highly committed performance’ (Gramophone)
‘The recorded sound is brilliant. This is a disc that I wouldn't be without’ (American Record Guide)
‘Divertimenti does a first-rate job, abetted by Hyperion's atmospheric, transparent recording’ (Fanfare, USA)
‘A fascinating piece which makes me curious about Bargiel's other music’ (The Tablet)

When Friedrich Wieck decided to abandon theology, which he had studied at the University of Wittenberg in the early years of the nineteenth century, he took the post of private tutor in the household of one Baron von Seckendorf. There he met and made friends with Adolf Bargiel, the piano teacher. Wieck himself was a self-taught musician and before long began to consider making some sort of career in music. He moved to Leipzig and, with the help of some influential friends, managed to find a few pupils. He had also started to compose and even had the temerity to dedicate some songs to Weber, to whom he sent them asking for candid criticism in return. By 1818 he had acquired a music-lending library and a small piano-hire business and had married Marianne Tromlitz, an accomplished singer and pianist. In September 1819 their daughter Clara was born.

After only eight years of marriage, and still only twenty-seven, Marianne left Wieck, whom she was finding increasingly domineering. At first Clara was allowed to be with her mother, but in September 1824 Wieck was granted custody of his four children, so Clara was returned to him. The following year Marianne married her ex-husband’s former colleague, Adolf Bargiel. There had already been rumours that the two had been conducting a secret affair, but Marianne’s father blamed Wieck for any impropriety that may have taken place. ‘Spend more time with her’, he urged, ‘and avoid every opportunity which could bring her together with Bargiel’.

On 3 October 1828 a son was born to Marianne and Adolf Bargiel and he was named Woldemar. He studied piano, violin and organ at home with his parents, and also took lessons in counterpoint from the distinguished teacher Siegfried Dehn (as did his step-sister Clara when she visited Berlin in 1837). In 1846 he enrolled at the Leipzig Conservatoire which Felix Mendelssohn had founded some four years earlier. He did this at the suggestion of Robert Schumann who, by virtue of having married Clara in 1840, was by then his step-brother-in-law. His teachers there were Ignaz Moscheles for piano, Julius Rietz and Niels Gade for composition, and Moritz Hauptmann for theory. While he was still at the Conservatoire he had a considerable success with his Octet for strings, which was performed at one of the public examinations. This was published in 1877 by the Leipzig firm of Breitkopf & Härtel as his Opus 15a. (Its companion piece, Opus 15b, was Bargiel’s first String Quartet, in A minor.) The Octet is in three movements, the second acting as a combined slow movement and scherzo. Although the adolescent Sturm und Drang of the first and last movements and the hymn-Iike piety of the opening of the second are undeniably dated, the work has a sincerity and enthusiasm which should endear it to both players and listeners. It is dedicated to Ludwig Norman.

In 1850 Bargiel returned to Berlin and soon gained a reputation as both a teacher and a composer. In 1859 he became Professor of Theory at the Cologne Conservatoire and then in 1865 Kapellmeister and Director of the institute of the Maatschappij tot Bevordering van Toonkunst in Rotterdam. Joseph Joachim appointed him Professor of Composition at the Berlin Hochschule für Musik in 1874 and the following year he became a member of the senate of the Academy of Arts. During his lifetime his music was widely performed. His overtures Prometheus and Medea were heard at the Crystal Palace in the 1860s and were highly thought of. Wilhelm Altmann, writing of Bargiel in 1928 in Cobbett’s Cyclopedic Survey of Chamber Music, points out that ‘it is evident from his works that he was an adherent of Robert Schumann’ and suggests that ‘his chamber music, though it sounds extremely well, has been undeservedly neglected of late’. (Hopefully, this recording of the Octet should help to change that state of affairs.) Woldemar Bargiel died on 23 February 1897.

One work that rarely escaped an encore when played at the Crystal Palace was the Scherzo from Mendelssohn’s Octet. On those occasions it would have been performed in the orchestral version which the composer had made to be used as an alternative to the Minuet and Trio of his C minor Symphony. (In March 1856, when this symphony was given at the Crystal Palace, a note appeared in the programme as follows: ‘Visitors are requested to keep their seats during the Performance of the Music. An interval will be allowed between the pieces, and between the movements of the Symphony, which can be taken advantage of by those who wish to move.’)

Mendelssohn composed his Octet for strings in 1825 soon after his family had moved into a large, imposing house in the Leipzigerstrasse on the outskirts of Berlin. In the extensive grounds was a garden house which contained a room large enough to seat a sizeable audience for the family’s Sunday morning concerts. It was at these gatherings that the young Felix gained much of his musical education, both as a listener and performer. As well as the piano he also played the violin and the viola and regularly took part in performances of the several string symphonies he had already composed. It was, no doubt, the experience of writing these symphonies that enabled him to produce so effortlessly at the remarkably early age of sixteen as perfect a work as his Octet. Mendelssohn’s achievement was all the more amazing as there was hardly any precedent in chamber music for a composition of this kind. There was the first of the double quartets of Louis Spohr (composed in 1823), but in this work, as the name implies, the instruments were treated as two distinct string quartets, balancing and answering each other. There had also been Beethoven’s Septet, Opus 20, first performed in 1800, and Schubert’s Octet of 1824, but these involved wind instruments as well as strings. Mendelssohn, however, knew what he wanted and left careful instructions in the score: ‘This Octet must be played by all the instruments in symphonic orchestral style. Pianos and fortes must be strictly observed and more strongly emphasised than is usual in pieces of this kind’.

Mendelssohn not only dedicated the Octet to his revered violin teacher Eduard Rietz, elder brother of Bargiel’s composition teacher Julius Rietz, but also gave it to him as a birthday present. He obviously had his teacher in mind when he wrote the soaring violin phrases at the beginning of the first movement. The Scherzo was inspired by some lines from the ‘Walpurgis Night’ scene in Goethe’s Faust. According to his sister Fanny, Mendelssohn intended the Scherzo to be played ‘staccato and pianissimo’ for ‘everything is new and strange, yet at the same time utterly persuasive and enchanting. One feels very near to the world of spirits, lifted into the air, half inclined to snatch up a broomstick and follow the aerial procession. At the end the first violin takes flight, light as a feather—and all is blown away’. The Scherzo theme reappears briefly in the Finale and is skilfully woven into the texture, after which the Finale’s other motifs are recalled and combined together.