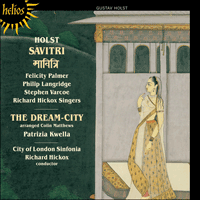 ‘Most vivid and sensitive performance’ (Gramophone)
‘An attractive disc’ (BBC Music Magazine)
‘Full, immediate recording’ (The Daily Telegraph)
‘This CD contains one of the masterpieces of British music of the last century … Savitri deserves a place of honour on the shelf marked "British"’ (International Record Review)
‘If you have not come across Holst’s Savitri, then I envy you the prospect of hearing this small miracle of a one-act opera for the first time. Fine performances make this a budget-price bargain’ (Classic FM Magazine)
‘A fine issue’ (Hi-Fi News)

Although Savitri is rightly considered to be Holst’s first successful opera, its success was only achieved after at least six earlier attempts at the medium: opera clearly obsessed Holst in his early years. He spent much of his time as a student reading and listening to the music of Wagner. In Imogen Holst’s words, ‘He ate and drank Wagner and took in huge draughts of Wagner with every gasp of air he breathed’.

The small scale of Holst’s earliest works for the stage—several unadventurous, though competent, operettas after the Sullivan model—soon gave way to more ambitious plans. The culmination was Sita (1900–06), whose three acts are in the grandest, most extravagant style, and whose musical language is, for the most part, saturated with Wagnerisms.

Yet by 1908, when Sita was eventually awarded Third Prize in the Ricordi competition for which he had entered it (the work was never performed), Holst had composed Savitri, and with it he completely turned his back on the whole Wagnerian apparatus. The opera is in one act with no overture; no curtain is required; there are only three characters; the plot is of the utmost simplicity; and the orchestra consists of no more than twelve musicians.

This revolution in Holst’s approach to opera can partly be explained by the subject. In Sita he had turned to the great Hindu epic, the Ramayana, and had tried to enter into its world of spirits and demons, gods and mortals—a world not far removed from Wagner’s ‘Ring’. In choosing Savitri, an episode from another great classic of Sanskrit literature, the Mahabharata, Holst found a subject that was still epic in its scope—the triumph of love over death—but whose setting was simple and homely. He responded with music of equal simplicity. Although in the final scene of Sita Holst had already begun to find his own voice and had shown that he was capable of expressing emotion with a telling economy of means, this new directness of Savitri is a remarkable achievement.

The opening of the work is like no other opera. The voice of Death is heard in the distance, summoning Satyavan, the husband of Savitri. Savitri herself joins Death in counterpoint (not dialogue), and their voices remain unaccompanied for fully three minutes.

When Satyavan sings of maya—illusion—his voice is set against the remote sound of a wordless female chorus. Their voices symbolize the divine world interacting with the mortal; they are heard again when Death reappears to claim Satyavan. They join too with Savitri as she rejoices in her victory over Death, who has yielded to Savitri’s plea that her life cannot be complete without Satyavan. And the opera ends as it began, with the voices of Death and Savitri, the one returning to his kingdom, the other—the ‘glorious woman’ as Death calls her—singing in quiet ecstasy of her love for her husband.

The poetry of Humbert Wolfe (1885–1940) has today virtually disappeared, even from the anthologies. In the 1920s his work, meticulous in its craftsmanship and in its sensibility, was well known and Holst became a great admirer and friend after reading the collection published in 1927 as Requiem.

In 1929, on his return from a much-needed winter holiday in Italy, Holst set twelve of Wolfe’s poems for high voice and piano. Apart from the Four Songs for voice and violin (composed in 1917) they were the first solo songs he had written for more than twenty years, and they reveal a lyricism and warmth often absent from his music. At their first performance in Paris they were grouped together under the title of The Dream-City. But they were not intended to form a cycle, and were published by Augener (after three other publishers had rejected them) as individual songs.

My intention in orchestrating ten of the songs was specifically to create an orchestral song-cycle, and so I have in a few places composed linking material. This is most in evidence in the third part of the work where the three songs play without a break. I have joined the first song (which is slightly expanded) to the second, and the third to the fourth. But in the second part, the work’s centre of gravity, the three poems remain separate.

The music is scored more elaborately, perhaps, than Holst might have allowed himself. But, bearing in mind the pianistic nature of the original, I hope that the result is as close to the spirit of the music as a conscious attempt to recreate Holst’s own orchestral idiom would be.