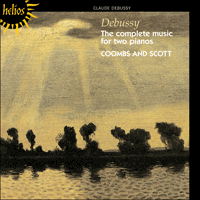 The Complete Music for Two Pianos

‘These performances are unsurpassed on CD’ (Gramophone)
‘Leads the field in this repertoire. Very highly recommended’ (The Penguin Guide to Compact Discs)
‘This recording goes to the very top of my want list’ (Fanfare, USA)
‘Poetically refined performances which fully equal, and in some cases even surpass, distinguished versions of the past’ (CDReview)

During the last decade of the nineteenth century Claude Debussy was a frequent visitor at the gatherings of writers and artists held on Tuesday evenings at the home of the poet Stéphane Mallarmé. In 1876 Mallarmé had published a poem called ‘L’après-midi d’un faune’ and sixteen years later Debussy, realizing that Mallarmé had been hoping for some kind of theatrical Presentation of his poem, began composing a work described at that stage as ‘Prélude, Interludes et Paraphrase finale’, presumably with the intention of providing some incidental music for such a performance. In the event it was just the Prélude à l’après-midi d’un faune that materialized but, nonetheless, Mallarmé expressed himself pleased with the way that Debussy’s music brought out the emotion of his poem. It was given its first performance in Paris on 22 December 1894. The conductor on that occasion, Gustave Doret, describes in his memoirs how Debussy had come to his apartment with the proofs of the orchestral score of the piece and had played it through several times on the piano. Doret was amazed at the composer’s ability to reproduce at the keyboard all the orchestral colours and the nuances of the individual instruments, thus creating an apparently perfect interpretation of the work.

Maurice Ravel, who once proclaimed that he would like the Prélude à l’après-midi d’un faune to be played at his funeral, transcribed it for piano duet in 1910, but the arrangement (recorded here) for two pianos is by Debussy himself and dates from 1895.

In September 1894 Debussy wrote to the Belgian violinist Eugène Ysaÿe about three nocturnes for solo violin and orchestra that he was composing for him. (Ysaÿe’s quartet had given the first performance of Debussy’s String Quartet the previous year.) In the first of these pieces the orchestra was to consist of strings alone, in the second of flutes, horns, trumpets and harps, while in the third all of these instruments would come together. Debussy told Ysaÿe how he wanted to experiment with the different combinations possible with a single colour in the same way that a painter might make a study in grey. Two years later Debussy referred to these nocturnes again, implying that they had been completed, and still hoping that Ysaÿe would be the one to play them. Although this was not to be—for, by the time the Trois Nocturnes came to performance, there was no part for solo violin—he was able to tell Debussy in 1903 that he had decided to conduct them. It is not possible now to determine how closely the final version of the Nocturnes resembles either the piece Debussy was writing for Ysaÿe or yet an even earlier work, the Trois scènes au crépuscule, that some consider to have been its true precursor.

The first performance of the Nocturnes was planned for 9 December 1900, but in the event only the first two movements were played because the female chorus required for ‘Sirènes’ was not available. It was not until 27 October 1901 that the work was heard complete for the first time. At about this time, Ravel, in collaboration with Debussy’s stepson and pupil Raoul Bardac, began work on a transcription of the Nocturnes for two pianos. This was not given its first performance, however, until 24 April 1911 when Ravel and Louis Aubert played it at the Salle Gaveau in Paris.

Although dating from April 1901, Lindaraja, Debussy’s first characteristically Spanish piece, was not published until 1926, eight years after the composer’s death. It was also his first piece for two pianos. In common with many ‘foreign’ composers who have written highly successful ‘Spanish’ music, Debussy’s knowledge of Spain came from observing the country from afar, rather than from regular visits to it. One of the possible influences on Lindaraja was the ‘Habanera’ that had formed part of Sites auriculaires composed for two pianos by Ravel in 1895. Lindaraja itself has been described as a ‘worthy forerunner’ of Debussy’s first solo Spanish piece, La soirée dans Grenade, a work which Manuel de Falla (whose picture postcard to Debussy is reputed to have inspired it) considered the most perfect musical representation of Andalusia.

In January 1907 Falla wrote to Debussy asking for advice prior to a performance he was about to give in Madrid of the Danse sacrée et danse profane. In his reply Debussy was not prepared to go into much detail. He referred to the ‘colour’ of the two dances, comparing the ‘gravity’ of the one with the ‘grace’ of the other and expressed himself content to leave the performance to the Spaniard’s own musical taste. Falla was going to play the Danses on the piano, but they had originally been composed for the harp. In 1894 Gustave Lyon had invented a chromatic harp which, by virtue of an extra set of strings, removed the need for the pedals found on the conventional instrument. The Paris firm of Pleyel, with the intention of popularizing it, commissioned Debussy, amongst others, to compose something for the chromatic harp. The two Danses, for harp and string orchestra, were composed in 1904 and were dedicated to the instrument’s inventor. It would seem that Debussy (or perhaps his publishers) had little faith in this new invention, for the score indicates that the solo part in these dances can also be played on the pedal harp (as they usually are) or on the piano. The reduction for two pianos, which also dates from 1904, was made by Debussy himself.

The outbreak of the First World War in August 1914 greatly affected Debussy, rendering him almost silent as a composer. To keep his mind occupied, his friend and publisher Jacques Durand had persuaded him to take part in the creation of a new French edition of the Standard classical works to replace the existing German one. Debussy expressed an interest in this project, pointing out that he saw a particular need to produce new versions of the piano-duet arrangements of all the symphonies in the catalogue. (He had played many of these as a young man while employed at the home of Tchaikovsky’s benefactress Nadezhda von Meck.) The main task that he chose to complete, however, was the editing of Chopin’s piano music. By June 1915 he was beginning to think again of composition and told Durand of some pieces for two pianos he had in mind. He spent the summer of 1915 with his wife at Mon Coin, a house in Pourville, near Dieppe, owned by the playwright Ferdinand Hérold whom Debussy had met at Mallarmé’s soirées, and while he was there he worked at his three Caprices en blanc et noir. By the time the composer and Jean Roger-Ducasse gave them their first performance in 1916 the title had been shortened to En blanc et noir. Each of these pieces, which according to Debussy were like the greys of Velazquez, is headed by a quotation. That for the first piece consists of a short extract from the libretto by Jules Barbier and Michel Carré that Gounod had used for his opera Roméo et Juliette. Some commentators have suggested that by quoting these lines—‘Qui reste à sa place / Et ne danse pas / De quelque disgrâce / Fait l’aveu tout bas’—Debussy was referring to those who, like himself, were not able to fight in the War. This does not, however, explain the dedication ‘à mon ami A Kussewitsky’. In 1913 Serge Alexandrovich Koussevitzky had invited Debussy to conduct several of his works, including the Nocturnes and the Prélude a l’après-midi d’un faune in Moscow and St Petersburg. Although the letters to his family indicate that he did not enjoy being so far from home and that he was indeed feeling very miserable in Russia, Debussy was impressed both with Koussevitzky’s indomitable spirit and with his orchestra.

The quotation associated with the second piece comes from the Ballade contre les ennemis de la France by François Villon: ‘Prince, porte soit des serfs Eolus / En la forest ou domme Glaucus, / Ou prive soit de paix et d’espérance / Car digne n’est de posséder vertus / Qui mal vouldroit au royaume de France.’ Debussy’s anger against the enemies of France was inspired in particular by the death in battle of a cousin of Jacques Durand who had also worked for the family publishing firm. The dedication ‘au Lieutenant Jacques Charlot tué à l'ennemi en 1915, le 3 mars’, pinpoints the moment of the young man’s death and leaves no doubt as to the cause of it. Ravel was later to make a similar gesture to the memory of Charlot by dedicating to him the ‘Prélude’ from Le Tombeau de Couperin.

The line Debussy quoted at the head of the last of these pieces—‘Yver, vous n’este qu’un vilain’—comes from a poem that he had already set as the third of Trois Chansons de Charles d’Orléans for unaccompanied chorus. Correspondence between Debussy and Stravinsky (to whom this third piece is dedicated) during October 1915, apart from dealing with arrangements for a performance of the Nocturnes in Geneva, reveals the preoccupation of both composers with the War, and their fear that it would lead not only to the destruction of their nations but also of their art.