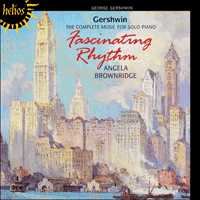 ‘Marvellous little gems thrown off with a tremendous amount of aplomb and elan. A must for all Gershwin fans’ (Gramophone)
‘A brilliantly accomplished pianist, assured, passionate, hugely versatile. Gershwin is in her blood. An enchanting disc for all who love Gershwin's music’ (BBC Music Magazine)
‘This musical journey to Broadway is well worth taking and should be a must for all \Gershwiin fans’ (Bolton Evening News)

It is impossible to imagine the career of George Gershwin (1898–1937) without his spectacular piano playing. His family wasn’t particularly musical and he had no access to a piano at home until he was about twelve. Before that he recalled being captivated by hearing Rubinstein’s Melody in F on a player-piano in the street. But once he discovered the piano for himself, it focused his entire musical orientation. He started by having some lessons with a classical teacher but in 1914 he moved over to Tin Pan Alley, working for Jerome H Remick and Co as a song plugger. Here he learnt his repertoire, saw the direct relationship between composer and consumer, and began to find his own bearings. He didn’t have long to wait before he could get all the opportunities he needed—at the frenetic pace which dominated his activities for the rest of his life.

Gershwin’s songs are another essential ingredient in his unique personality. His instinctive grasp of memorability; his blending of black and white influences with the strength of a true hybrid; and his partnership with his brother Ira, whose lyrics have the precision of some of the best light verse. All these aspects make Gershwin a towering figure, transcending Tin Pan Alley, conquering concert hall and opera house, and making his American heritage universal. This recording unites Gershwin as a song writer and pianist and includes all the short piano pieces at present available.

Rialto Ripples: Named after a district in Venice, this is Gershwin’s first instrumental number. He recorded it on a piano roll in 1916 and the score was published in the following year, showing Walter Donaldson, prolific composer of many shows, as joint composer. The rag design is: Introduction–A–A–B–A–Link–C–A.

Two Waltzes in C from Pardon my English (1933): These two waltzes, at the opposite end of Gershwin’s career, come from the unsuccessful show Pardon my English, which nevertheless contained classic songs such as ‘The Lorelei’ and ‘My Cousin in Milwaukee’. The two waltzes were played by Gershwin and Kay Swift on two pianos as an instrumental interlude. First one, then the other, then both together. Ira Gershwin called the number ‘Her waltz, his waltz, their waltz’.

The first appearance of Gershwin’s Song Book was in a limited edition from Random House, with the sheet music of the songs followed by the composer’s own arrangements. In a preface Gershwin explained a mechanism he understood only too well: the publishers printed simplified versions because ‘the majority of the purchasers of popular music are little girls with little hands, who have not progressed very far in their study of the piano’. But these versions, refined through constant performances by the composer himself, are aimed at more serious players. Gershwin quite openly cites some of the pianists who have left their mark on his style—black players like Luckey Roberts, especially the novelty pianist Zez Confrey, and Phil Oman, who accompanied many Gershwin shows. Gershwin cautioned pianists against too much use of the sustaining pedal—‘the rhythms of American popular music are brittle … the more sharply the music is played, the more effective it sounds’.

Swanee from Sinbad (1919): Gershwin’s first major hit. He played it at a party for Al Jolson who decided to put it into his show. The text yearns for the deep South so Gershwin pops in the opening phrase of Foster’s ‘Old Folks at Home’ right at the end.

Nobody But You from La-La-Lucille! (1919): The most successful song from the first all-Gershwin show. The transcription shows harmonic originality going beyond Tin Pan Alley.

The Man I Love from Lady be Good (1924): Described as ‘the most moving pop song of our time’ by Wilfrid Mellers (Music in a New Found Land, 1964), The Man I Love took a long time to reach classic status. The piano-setting is sumptuous—blue notes, chromatic slides, and even plenty of sustaining pedal indicated.

I’ll build a Stairway to Paradise from George White’s Scandals of 1922: One of the two most popular songs in the show, this melody is centred on blue notes in a kind of march rhythm.

Do it again from The French Doll (1922): Another song Gershwin played at a party—this time Irene Bordoni heard it and incorporated it into what was considered as a risqué French comedy in which she featured. If the lyric was suggestive, Gershwin’s harmonies are more than a match.

Fascinating Rhythm from Lady be Good (1924): A dance number for Fred and Adèle Astaire, where Gershwin himself made a suggestion for their exit steps at the end of the number. What the composer called the tune’s ‘misplaced accents’ come from ragtime.

Oh, Lady be Good from Lady be Good (1924): Another song from the same show. Plenty of rhythmic detail and an unexpected key shift downwards and back just before the end.

Somebody loves me from George White’s Scandals of 1924: The melody is set in the tenor register to begin with and the counter-melody suggests the blue notes coming—perfectly placed for the text: ‘Somebody loves me. I wonder who.’

Sweet and Low Down from Tip-Toes (1925): This show opened at a time when Gershwin’s symphonic jazz in Rhapsody in Blue and the Piano Concerto were causing a sensation. The piano transcription, marked ‘in a jazzy manner’, is a kind of slow boogie.

Clap yo’ hands from Oh Kay! (1926): A kind of spiritual in this typically successful show—256 performances, exceeded at this time only by Lady be Good with 330.

Do Do Do from Oh Kay! (1926): A simple melody decorated in dotted rhythms.

My One and Only from Funny Face (1927): Left-hand tenths and rhythmic breaks are features of this transcription of a melody with prominent blue notes.

’S Wonderful from Funny Face (1927): This is a tune which starts on two notes, repeated and qualified by harmonic changes. The transcription decorates this pattern, going into glissandi at the song’s climax.

Strike up the Band from Strike up the Band (1930): Gershwin had some trouble getting the final form of this number, which he called a march, but it became the best-known song in the show, colourfully transcribed over a firm bass.

I Got Rhythm from Girl Crazy (1930): A hit, a jazz standard, and a purveyor of rhythmic ingenuities, I Got Rhythm has got everything to do with Gershwin in it. The transcription, unusually, goes through the tune twice: first in D flat; then, after a chromatic transition, in F, ending with the repeated-note technique of the Piano Concerto’s finale.

Who cares? from Of Thee I Sing (1931): The song’s refrain (‘in a lilting manner’) has been slowed down for the transcription, marked ‘rather slow’, which is an eloquent late-night meditation.

That Certain Feeling from Tip-Toes (1925): A sentimental tune based on repeated notes and marked ‘ardently’.

Liza from All the Clouds’ll Roll Away (1929): The set ends with an ornate treatment—two statements of the tune—of a minstrel number for a hundred girls on stage.

Impromptu in Two Keys: A sketch, based on bitonal harmony, which Ira Gershwin had published in 1973. It dates from 1924.

Three Preludes: There are confusions about Gershwin’s Preludes, written between 1923 and 1926. When he first played them in public there were five of them and his sketches show that he planned many more, a series called ‘The Melting Pot’. Of the published ones he called the first ‘Spanish’, the second ‘a sort of blue lullaby’, and dedicated the triptych to fellow composer William Daly.

Ballet from Primrose (1924): The show Primrose opened at the Winter Garden Theatre, London, on 11 September 1924 and ran for 255 performances. Gershwin wrote nineteen numbers, including this ballet which is practically unknown. Edward Jablonski (Gershwin: a Biography, 1988) finds it all ‘tongue-in-cheek’ as a ‘satiric treatment of classical dance’.

Three-Quarter Blues: Written in the early 1920s. The title means a blues in 3/4 time: the subtitle is ‘Irish Waltz’.

Promenade from Shall We Dance (1936): Originally an instrumental interlude called ‘Walking the Dog’, this number was transcribed by H Borne.

Merry Andrew from Rosalie (1928): Originally used for a dance, this melody anticipates ‘They all laughed’.

Jazzbo Brown from Porgy and Bess (1935): When the curtain rises for Act I of Gershwin’s operatic masterpiece, this is the music Jazzbo Brown is playing on stage—‘a low-down blues’, according to the stage directions.

Overture to Girl Crazy: The most familiar tunes in the overture are: ‘Embraceable you’, ‘I Got Rhythm’ and ‘But not for me’.

Overture: Girl Crazy: Les airs les plus familiers de l’ouverture sont: «Embraceable you», «l Got Rhythm» et «But not for me».

Overture: Girl Crazy: Die bekanntesten Melodien dieser Overtüre sind: „Embraceable you“, „l Got Rhythm“ und „But not for me“.