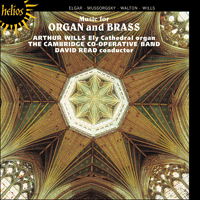 Music for Organ and Brass Band

Although Pictures at an Exhibition is now recognized as a unique masterpiece, it was completely ignored during the composer’s lifetime and only gradually gained a foothold in the European concert repertoire after 1920. For a long time it was considered to be unpianistic and extremely problematic on both musical and technical grounds. It is not surprising, then, that several orchestral transcriptions have been made, the best known being that by Ravel, whose version was commissioned by Serge Koussevitsky for his Boston Symphony Orchestra. Although the work lends itself extremely well to skilful orchestration, an organ transcription would seem even more appropriate on the grounds that the keyboard origin of the piece is retained. In addition, a quasi-orchestral range of tonal colour is available, and the capacity for sustained tone—that unrivalled feature of the organ—outdoes both piano and orchestra in such numbers as Catacombae and The Great Gate of Kiev. Much of Mussorgsky’s piano writing adapts well to the organ with but little modification, and at no point does one feel that the musical requirements are in the least foreign to the essential nature of the instrument.

The inspiration for this music was an exhibition in St Petersburg of works by Mussorgsky’s artist friend Viktor Hartmann, who had died suddenly at the age of 39 on 23 July 1873. Both men had been absorbed in the task of finding a new means of expression for Russian art—one which would give full scope to the history, folklore and daily life of the people. Mussorgsky was an incomparably greater artist than his friend, but he undoubtedly admired Hartmann’s work, and this suite conveys not only the composer’s lively response to the drawings and paintings but also the depth of feeling aroused by his friend’s death. Mussorgsky was obsessed by death throughout his career and in the eighth movement, Catacombae, and especially in its second part, Con mortuis in lingua mortua, he expresses this sense of loss without a trace of sentimentality. In a footnote added to this movement he says: ‘The creative spirit of the departed Hartmann leads me to the skulls, calls me close to them, and the skulls glow softly from within.’ This objective approach to his art makes Mussorgsky an unrivalled observer of the world and its inhabitants, their physical movements and their psychology in equal measure. The whole suite is a strikingly forward-looking conception which takes us well into the world of the early twentieth century. Anticipations of the styles of Debussy, Ravel, Bartók and Stravinsky are not hard to find, and this is more remarkable when we remember that the only models Mussorgsky could have known were the early piano suites of Schumann.

The work begins with, and several ‘pictures’ are linked by, the Promenade, representing an observer approaching the pictures and moving from one to another. After its initial appearance we hear the first ‘picture’, Gnomus (‘The Gnome’), which has been described as a drawing representing ‘a little gnome walking awkwardly on deformed legs’. According to Alfred Frankenstein, who undertook much research into Hartmann’s work, it was really a design for a toy nutcracker and an example of Hartmann’s ‘fantastic craft work’. Mussorgsky’s music is grotesque and threatening. After another Promenade the next piece, Il vecchio castello (‘The Old Castle’), depicts ‘a medieval castle before which stands a singing troubadour’. Hartmann visited Italy, France, Germany and Poland between 1864 and 1867 and Frankenstein is of the opinion that the picture is question was ‘obviously one of Hartmann’s architectural water-colours done in Italy’. This is linked by another appearance of the Promenade theme to the next ‘picture’, Tuileries: Children quarrelling after play, no doubt inspired by Hartmann’s visit to Paris. It is a scherzo-like movement depicting the noisy children at their games. Bydlo is a representation of a Polish ox-cart lumbering along on enormous wooden wheels, most graphically depicted by Mussorgsky.

The Promenade again leads us to the Ballet of the unhatched chicks, an example of Hartmann’s work as a stage designer. In 1871 he made some sketches for a production of Nodier’s Trilby as a ballet, choreographed by Petipa with music by Julius Gerber and presented at the Bolshoi Theatre in St Petersburg. The dancers are shown dressed in costumes resembling large eggshells. The fledglings were canary chicks. Another vivid musical picture is Two Polish Jews, one rich, the other poor. There are some doubts concerning the nature of the Hartmann original. It may have been a drawing showing two Polish Jews in the Sandomir ghetto, or two separate drawings exhibited as belonging to Mussorgsky, one entitled ‘A rich Jew wearing a fur hat: Sandomir’, the other ‘A poor Sandomir Jew’. The two Jews were unnamed by Mussorgsky, though the ‘picture’ is well known as ‘Samuel Goldenberg and Schmuyle’. The person responsible for renaming them remains unknown.

The penultimate movement, The Hut on Fowl’s Legs subtitled ‘Baba Yaga’, is a representation of the Russian witch who dwelt in such an abode. Hartmann’s picture was actually a design for a clock. Mussorgsky’s music suggests the crone flying through the air.

Op 4 April 1866 an attempt was made on the life of Tsar Alexander II at Kiev. Three years later Hartmann entered a competition for designs for a gateway to commemorate the event. The drawing still exists and shows the front view of a stone gate in the old Russian style with adjoining belfry. This ‘Great Gate of Kiev’, though, was never built, but Mussorgsky brings his collection to an end with a splendid and grandiose depiction of it with massive chords and clamorous bells, wonderfully effective in this imaginative transcription of the ‘Pictures’ made by Arthur Wills especially for the organ of Ely Cathedral.

Nimrod is the ninth of the famous ‘Enigma’ Variations, each of which features in musical terms one of Elgar’s friends. It is dedicated to and portrays A J Jaeger, a German-born musician who worked for Elgar’s publishers, Novello & Co. The title is a kind of pun (Elgar was very fond of puns): Nimrod is the ‘mighty hunter’ mentioned in the Book of Genesis, and the German word Jaeger means ‘hunter’. Jaeger encouraged, chided, sympathized with and doted on Elgar; he recognized his genius at a time when few others did, and his critical comments helped the shy and introverted composer a great deal. Hence this heartfelt tribute, which also reflects on a conversation Elgar had with Jaeger on the quality of Beethoven’s slow movements.

What needs to be said about the superb Pomp and Circumstance March No 4 by Sir Edward Elgar? This famous work was composed in 1907 and the present arrangement is by Arthur Wills.

Sir William Walton’s Coronation March Crown Imperial was commissioned by the BBC to celebrate the coronation of King George VI and Queen Elizabeth in 1937. It contrasts a vigorous and rhythmic main section with a broad, flowing tune that smacks distinctly of Elgar in ‘pomp and circumstance’ mood. Both sections recur and the ending is one of great majesty and splendour, as if all the bells of London Town were ringing out in triumph. Walton wrote a good deal of music for films; Touch her soft lips and part is a gentle piece taken from the score he composed for Laurence Olivier’s first Shakespeare film, Henry V.

The association of brass and organ goes back a long way—think, for example, of the glories of Venetian church music in the days of the Gabrielis over three hundred years ago. No one seems to have thought, however, of composing a special piece for cathedral organ and brass band before the idea occurred to David Read. True, there have been magnificent arrangements of ceremonial pieces for such forces (some are featured on this recording), but the idea of a large-scale original composition for such an exciting-sounding ensemble is quite original. David Read approached the Eastern Arts Association who readily agreed to fund the work. Dr Arthur Wills was commissioned to compose it. He linked the work to its area of origin by making it a four-movement symphonic suite, each movement portraying musically some aspect of the Fens. Those who live in more spectacularly scenic areas may wrinkle their brow at the thought of the flat fenland inspiring interesting music; those, however, who live in and understand the fen landscape will immediately see its potential.

The Fenlands (Dr Wills thought at first he might call the work ‘Fenlandia’!) is a sinfonia concertante for organ and wind band, and it requires both technical skill and imaginative musicianship from the soloist and wind players. The first movement, ‘The Vikings’, is powerful, sombre and vigorous, expressing as it does the ‘dynamism and vigour of the pagan culture of this energetic and warlike race’. Wagnerians will readily recognize the ‘Fate’ motif from ‘The Ring’ which is skilfully woven into the texture and developed alongside a brusque rhythmic motif in the band and a quotation from Dr Wills’s own Carol of King Canute (Canute was also associated with the Fens).

The second movement, ‘Wicken Fen’, is a compositional tour de force in that it is a palindrome—halfway through, the music is reversed, retracing its steps to the beginning. Wicken Fen is one of the few areas of fenland that has remained virtually unchanged for hundreds of years, being totally unaffected by the reclamation through drainage that took place from the seventeenth century onwards. It is an eerie place whose flatness and apparent featurelessness have a remote, gaunt majesty which is superbly captured in this atmospheric music, the organ weaving shimmering figures against the band’s soft chords that build up into a climax of almost frightening power.

The third movement, ‘Oliver Cromwell’, portrays a fenland figure who combined energetic and extrovert resolution with dour and sombre devotion to a grim, tenacious religious faith; and the vigorous, tuneful finale, a march named after the City of Ely, captures the spirit of a vigorous musical tradition established by Elgar and Walton—tuneful, self-confident and full of ceremonial colour. Thus, in the composer’s words, it ‘pays homage to the City, the Band, and a great musical heritage’.

The Fenlands was first performed by the composer and The Cambridge Co-operative Band in Ely Cathedral on 10 October 1981.

The organ at Ely Cathedral
An organ was first built at Ely Cathedral in 1685, reputedly by Renatus Harris. In 1831 Elliot and Hill built a new organ within the old cases, which stood on the choir screen. This organ was rebuilt in the North choir triforium by Hill and Son in 1850, when the old cases and choir screen were removed, and the present case, designed by Sir Gilbert Scott, was installed.

In 1908, Harrison and Harrison built a virtually new organ, incorporating some of the old pipe work. Most of the organ was placed in the North choir triforium, with the console below, on the stone gallery behind the top of the choir stalls.

The restoration of 1974/5 included some tonal changes, a new Positive division in the lower part of the Scott case, development of the Pedal Organ and modernization of the action and console. The new scheme was drawn up by the Cathedral Organist, Dr Arthur Wills, in consultation with Mr Cecil Clutton and the organ builders.