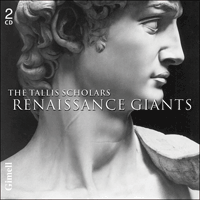 "The Renaissance is well known for its cultural giants. Leonardo da Vinci, Raphael, and above all Michelangelo epitomize a period when the human spirit seemed to grow and gain in confidence. This collection of complete works celebrates the musical geniuses who contributed to this astonishing period in European history." (Peter Phillips)

The High Renaissance is well known for its cultural giants. Leonardo da Vinci, Raphael, and above all Michelangelo epitomize a period when the human spirit seemed to grow and gain in confidence. There is no more visible proof of this than Michelangelo’s seventeen-foot-tall statue of David, more than twice the height of any major piece of sculpture before it. And Italy was not the only country which suddenly seemed to be populated by more-than-life-size men of genius, Shakespeare and Cervantes among them. This collection is designed to illustrate the musical side of this astonishing period in European history, from England via Flanders and Spain to Rome.

Music and musicians can bestride their world in one of two ways. They can either write a masterpiece which is in itself colossal; or they can write so many great works that they slowly change the countryside around them. Thomas Tallis did both. By writing music of the highest quality in every style of the period for nearly sixty years he influenced everybody who followed him. And he also wrote Spem in alium, perhaps not his most influential composition – who could follow it? – but unquestionably the largest single work of the period. Conceived for forty independent voice-parts arranged in eight five-part choirs, Spem in alium, like Michelangelo’s David, seems to break through what lesser men had come to accept as normal in music and enter a new world. The effect of forty parts coming together in properly argued polyphony is quite staggering. How did Tallis do it, without modern aids like computers or even sufficiently large pieces of manuscript paper on which to line up all the voices? There is much about Spem in alium which is not known – like why he thought of such a thing in the first place – but the greatest imponderable is how any mind could invent so much detail. Nothing comes close to rivalling it.

The Western Wind Mass by John Taverner is big in a quite different way from Spem in alium. Throughout the Renaissance period there was a vogue for taking popular tunes of the day and dressing them up, a technique which jazz musicians were to emulate in later times. Taverner chose the beautiful melody known as ‘Westron Wynde’, a love song which encourages the wind and the rain to do their worst so long as the singer and his beloved can be together. In choosing such a profane model for a Mass-setting Taverner was not in fact doing anything very uncommon; what was unusual was quoting the tune thirty-six times. I do not know any set of variations before Purcell’s ‘grounds’ to go so far; and, like Purcell, Taverner has the imagination to make them all interesting. He is quite deliberate about it: nine statements in each of the four movements, each one taking on new ideas and counter-themes. No one can miss the tune itself, since it is quoted twenty-one times in the top part, where it is always perfectly audible. It also comes ten times in the tenor part and five in the bass, though it is never sung by the altos. Taverner also helps the listener by making each variation self-contained and running them straight into each other without extra material. This makes the music quite sectional, alternating solo and full passages, but with the melody always present. Taverner was sufficiently a giant of his time to start a brief tradition of Western Wind settings: there are examples by his younger contemporaries Christopher Tye and John Sheppard.

If ever there was a giant among Renaissance composers, it was Josquin des Prés. It has become something of a modern cliché to compare his standing with that of Beethoven: a composer who could take any form of music and transform it. Part of his great influence came from the fact that he travelled throughout Europe, the first super-star among composers, a fact which was acknowledged at the time not least because he expected to be paid more than anyone else. He was especially present in Rome, from where he undoubtedly shaped the course of Italian polyphony in general, and Palestrina’s style in particular.

Josquin’s Missa Pange lingua is perhaps his best-known work and possibly his last Mass-setting. In general outline it is not dissimilar from Taverner’s Western Wind Mass: a set of variations on a well-known tune, but in this case the tune is a chant melody from the liturgy for the feast of Corpus Christi; and Josquin almost never quotes it straight. Indeed it is so hidden in the polyphonic texture that one may think of the whole composition as a fantasy on a plainsong, rather than a set of variations. The clearest statement is at the beginning of the third Agnus Dei, where the melody finally emerges in recognizable form in the soprano part.

Giovanni Pierluigi da Palestrina was by far and away the most celebrated Italian composer of the High Renaissance and, like Josquin, a legend in his lifetime. He was also, unlike any other Renaissance composer of any nationality, celebrated from his own time to ours without interruption. I wonder if any other composer in the history of music, apart from Wagner, has had so much written about him. And apart from all this he was working in and around the Vatican at the same time as Michelangelo in his later years, whom he must have known. As a result there is no other composer who is so closely identified with the culture of the Italian Renaissance period.

His Missa brevis was probably written for the Sistine Chapel choir to sing, which would mean that its first performances would have taken place surrounded by Michelangelo’s newly painted frescoes. Why the piece is called ‘brevis’ is something of a mystery, since the music is not especially short and all the usual movements are present. It may be because it is scored for only four voices, though this was quite commonplace. The final, glorious Agnus Dei increases the number of voices to five by introducing a second soprano part, in canon with the first.

Unlike his teacher Tallis, William Byrd didn’t write any single gigantic work by which he may be remembered. Indeed he is best remembered for his many small-scale pieces which, despite their size, revolutionized English composition. Like several of the other giants in this collection, Byrd turned his hand to every form of music available to him, transforming them as he went: music for keyboard, lute, viol consort, voices with viol consort, sacred vocal writing for both the Catholic and Protestant churches, and madrigals. To compare him with Shakespeare has some force since their lives overlapped, they both worked in London at the same time, and they both had the same characteristic intelligence of mind which penetrated to the heart of the words they were involved with. Byrd’s Mass for four voices is one of the three Masses he wrote in the 1590s and published, without title pages, in defiance of the Protestant ban on Catholic artefacts. This is not gigantic music in any sense, but subtle, intimate writing which in recent times has achieved greater renown than many much weightier musical edifices of the period.

The Spanish sixteenth century had its own great men and women to celebrate, from St Ignatius Loyola and St Teresa of Avila, to El Greco, Morales and Victoria. It will be seen from these names that the accent there in the High Renaissance was on the Catholic Church and spiritual life. Tomás Luis de Victoria was no exception to this. After being ordained priest in Rome in 1575 he spent the years from 1587 until his death employed at the court in Madrid, initially acting as chaplain to the Dowager Empress Maria, for whose funeral he wrote this Requiem in 1603. It comes as no surprise to discover that Victoria only wrote sacred music, and not very much of it by some standards, but what he did write is of such intensity that for many people his larger works, and especially the six-voice Requiem, are without rival amongst High Renaissance masterpieces. The slow, inevitable unfolding of this music, movement by movement, in complete serenity surely has a message for all time.