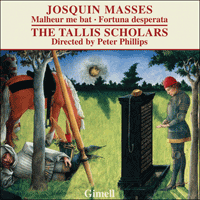 This album, the fourth in our planned cycle of complete Josquin Masses, was nominated for a Grammy Award in 2010.

‘In such an interpretation this mass of forty minutes' duration will offer much to ravish the ears for many years to come’ (Diapason, France)» More
‘As we expect by now, The Tallis Scholars offer first-class ensemble-work … in characteristically ingratiating performances that always leave us satisfied that we've just heard the most exacting and sincerely 'authentic' rendition possible by modern singers’ (Classics Today)» More

It has recently become a favourite intellectual game to compare Josquin’s career with that of Beethoven. Essentially the point is that Josquin was as influential a composer in his time as Beethoven was in his; but the subplot is that Josquin ought to be taken as seriously as any later composer even though he lived so long ago and only wrote for voices. To invoke his name in the same breath as Beethoven’s is the best way to put him where he deserves to be. The average music-lover will take the point.

There isn’t much substance in this except to point out that Josquin travelled constantly whereas Beethoven didn’t. But one intriguing idea that has come out of the comparison is that a Josquin Mass is presented these days like a Beethoven symphony – a succession of movements, making a satisfying musical experience when performed without break, in a concert hall. Unlike a symphony, the Mass traditionally ends with a slow movement, the Agnus Dei, while stacking the most positive music in the middle of the succession of events, in the Gloria and Credo; but in the hands of a master this doesn’t matter, since the musical logic will extend through all the movements, culminating in the last one, pro­ducing a rounded emotional experience comparable to, if different from, that of a symphony. In fact I personally have come to think of Josquin’s sixteen or so authenticated Mass-settings as an equivalent achievement to Beethoven’s nine symphonies: each one exploring a different aspect of the form, each one an intellectual and technical tour de force, each one showing a different side of his personality. In this respect there is more substance in comparing Josquin with Beethoven than with, say, Mozart or Haydn, since Josquin and Beethoven both seemed more concerned to individualize every work they wrote, to make each work tell.

The Mass-settings included on this disc are two of the finest to come from any pen. They are linked by having secular polyphonic songs as their models, coincidentally neither of which are safely attributed to any single composer. Malheur me bat is probably not by Ockeghem but by a little-known Flemish composer called Malcort, whose obscurity should not detract from the beauty of his song, nor from the fact that it became a favourite model for Mass-settings by composers active around the year 1500. How strange, then, that not one of the nine sources for it provides any words apart from the title – the performance given by The Tallis Scholars at the 2008 Promenade Concerts in the Royal Albert Hall, London, was made possible by commissioning a contemporary poet – Jacques Darras – to complete the text. The attribution of Fortuna desperata to Antoine Busnoys is more secure, though the manu­script evidence is not conclusive.

The two Masses sung here are also linked by the way Josquin borrowed his material from the chansons. Both of these chansons were three-voice compositions. Before Josquin the normal procedure in basing a Mass-setting on a chanson was to take one of the original voice-parts, often the tenor, and derive all the motifs to be used in the Mass from it. This was called paraphrasing a melody. However in these two settings Josquin went a stage further by plundering all three of the voice parts for quotable material, at a stroke tripling the stock of ideas he could draw on. Thus the art of parodying a poly­phonic model was born, in which tradition Missa Fortuna desperata, which is reckoned to be earlier than Missa Malheur me bat, was one of the first. We can hear Josquin refining and developing these techniques in Missa Malheur me bat.

These techniques are astonishingly complicated. Just about every bar of every movement on this disc is underpinned by a quotation from the model in question, though there seems to be no logic to how Josquin decided which of the three voices he was going to home in on, or whether more than one is being used at any given moment (all three tend to appear at the beginning of the movements), or what speed the chosen melody is being quoted at. In general he liked to construct his polyphonic lines out of quite short motifs, often quoted as sequences which become building blocks (the Sanctus of Missa Fortuna desperata gives a good example of this). More often than not his resourcefulness is not clearly audible: the best chance of hearing the chanson material is when he quotes their melodies in very long notes. This happens in the Credo of Missa Fortuna desperata, for example, where he takes the top part of the chanson and quotes it four times in the top part of the Mass in ever diminishing speeds (in the ratio 8:4:3:2), giving the movement a power­ful drive to its end since the last statement is going four times faster than the first. But the processes can be opaque: in Missa Malheur me bat, in both the Gloria and the Credo, he quotes a melody, stops, goes back to the beginning of it again and quotes more of it, stops again, returns again to the begin­ning and quotes yet further in a kind of expanding loop. Yet this thematic scaffolding is only part of the story. Around the ‘big’ quotations, Josquin borrows or invents literally endless tiny motifs, which serve to disguise the pure mathematics which underlie so much of the writing, while at the same time expres­sing the essential nature of the texts and driving the musical argument forward.

All this wisdom in the art of composition cul­minates in these Masses, as it tended to culminate in the Romantic symphony, in the last movement. By intensifying the learning which underlies both Agnus Dei settings, as well as intensifying the symbolism inherent in the borrowed themes, Josquin in his own style achieves a symphonic breadth of expression.

In the Agnus settings on this disc he was thinking as follows: Missa Malheur me bat’s Agnus has three invocations, which was the normal procedure in Josquin’s time and place. Missa Fortuna desperata only has two, though it is possible that a two-voice section, which would have come between the two four-part ones that exist, has got lost over time. In the first Agnus of Missa Malheur me bat the tenor carries a simplified version of the chanson tenor in long notes, while the other voices surround it with a classic example of Josquin building blocks with a repeating motif. The second Agnus, for two voices, is a free canon at the second. This, the most difficult canon of all to write, produces a mesmerizing, unearthly effect. The third Agnus is one of the great tours de force of the repertory, similar in method to the final Agnus of Josquin’s Missa L’homme armé sexti toni. The four voices of the earlier movements have become six. The outside parts of the chanson are retained without alteration while the middle part of the original is removed altogether and replaced with a double canon (that is, with two sets of two voices in canon with each other). In this way the music from the chanson acts as a scaffolding for the filigree detail of the canonic parts, coming and going as they like, as it seems outside time.

In the Agnus Dei of Missa Fortuna desperata Josquin invented an arguably simpler but no less effective formula. Again we are in the world of building-block motifs, but this time over a very long-note bass part, which at times explores the most sonorous depths of the voice. In the first Agnus these bass notes are formed from the original top part of the chanson, transposed down an octave and a fifth, augmented and inverted. The second Agnus follows the same pattern, only now the bass long-notes are taken from the chanson’s tenor, here transposed down an octave but uninverted. It has been suggested that the inversion in the first Agnus was intended to represent a catastrophic turn of Fortune’s wheel, with the return to normality made possible through the good offices of the uninverted melody in the second Agnus.

However one likes to view the very plausible symbolism inherent in these Agnus Deis, there can be no denying that by reviewing at the end the themes which have been circulating throughout the earlier movements Josquin brings his settings to a deeply satisfying conclusion. Not that the listener will consciously grasp everything that is happening – one needs a score for that, and even then it is hard to spot all the references. But subconsciously the mind is enthralled.