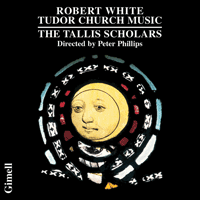 Cover artwork: The Man in the moon, medieval stained glass in the porch of St Mary's Church, Norfolk, photographed by Matthew Stevens

One of the very few albums dedicated entirely to a selection of works by Robert White, arguably the leading figure in that lost generation of English composers which came to maturity between Tallis and Byrd.

Robert White (c.1538–1574) was arguably the leading figure in that lost generation of English composers which came to maturity between Tallis and Byrd, in the middle of the sixteenth century. Along with Robert Parsons and William Mundy, White formed a school within a school, whose musical instinct was to look back to the Catholic style of Tallis’s youth (a style they had all but missed) while putting it to the service of Elizabeth I’s Protestant Church. The result is an idiom which is rare in Tallis, who showed himself prepared to jettison the old ways, and unknown in Byrd. To us it has a particular, almost nostalgic appeal: the polyphonic lines still unwind slowly, the scoring is still spacious, the cadences archaic; yet the phrases themselves are more highly organized than in music from the 1520s and ’30s, their expression more direct and poignant.

Like every composer active in England in the early years of Elizabeth’s reign, White was forced to make stylistic compromises as a result of the Reformation; and it is in the ingredients of these compromises that his individuality lay. Unlike Tallis, Sheppard and Tye, and although he was younger than them, he rarely wrote music with English words. The little Anglican music he did write was, like much of that by Parsons and Mundy, protracted and thoroughly polyphonic, coming close at times to sounding like exercises in Franco-Flemish imitation. His Latin motets, by contrast, are at once more modern and more old-fashioned: the five-voice Lamentations, which show White’s Latin style at its most advanced, contain little free polyphony, but rather expansive, often non-aligned homophony – yet are scored for the almost defunct choir of treble, mean, countertenor, tenor and bass. Even in his settings of the Hebrew letters which precede each verse and were traditionally written in abstract counterpoint (a method followed by both Tallis and Byrd in their settings of the Lamentations), White’s melodies seem to have been conceived in organized blocks, often repeating at the unison or octave instead of the fifth; often moving in parallel thirds, sixths or tenths: a half-way, individual style, neither exactly old nor new.

One can only guess for whom he wrote these potentially contentious and vocally demanding pieces. He seems never to have been formally attached to the Chapel Royal, the obvious recipient of them, though it remains highly probable that he was asked to contribute to their work, especially after 1569 or 1570 when he became Master of the Choristers at Westminster Abbey. Before that, in his brief career, he was a chorister and later one of the cantores at Trinity College, Cambridge (1555–1562); Master of the Choristers at Ely Cathedral – where he succeeded his father-in-law Christopher Tye (1562–1566); and probably Master of the Choristers at Chester Cathedral (c.1566–c.1569) before moving to London, where he died of the plague in the disastrous epidemic of 1574. Although White seems to have spent much of his life working to the north of the capital, his Will states that he left property of some substance in Sussex. This kind of biographical non sequitur should make us cautious of concluding that he never worked at court: it is perfectly possible that, from his Cambridge days, he regularly visited London and always kept in touch with developments there.

Elizabeth I not only permitted Latin-texted music to be sung in the Chapel Royal, she seems actually to have encouraged it. In this atmosphere a number of composers developed what is now called the Psalm-motet – often a complete Psalm set in a varying mixture of polyphony and homophony, each writer experimenting with the style as he thought fit. Caught again between old and new, the idiom of this extended motet could go either way: forward towards the consistently syllabic settings of the imitative Franco-Flemish motet, and the more homophonic Protestant anthem, scored for some combination of soprano, alto, tenor and bass (SATB); or back in resembling the pre-Reformation votive antiphon, in that its full-choir sections, characterized by high treble scoring, are punctuated by several duet and trio sections. In the two Psalm-motets, Portio mea and Exaudiat te Dominus, and the Magnificat included on this disc, White clearly intended to look back.

Of the three, the Magnificat is the most conservative: perhaps an inevitable consequence of White’s decision to follow a tradition of settings of this canticle which had originally evolved from John Taverner’s six-part version. White copied Taverner (as did Parsons and Mundy in their Magnificat settings) in using a basic choir of treble, mean, two altos, tenor and bass, which is sub-divided for some of the verses but includes a triple gimell of two trebles, two means and two basses at ‘Esurientes’. (Much of the treble part, as at ‘Esurientes’, is missing and has been reconstructed by Sally Dunkley.) Between the three magnificently spacious full-choir statements (‘Et exsultavit’, ‘Fecit potentiam’, and ‘et in saecula’) the ebb and flow of trios and quartets is carefully handled. The influence of Taverner’s mature style is audible at, for example, ‘Sicut locutus est’, where the plainchant appears in the mean, with the two alto and tenor parts intertwining beneath it.

Portio mea (a section of Psalm 119) and Exaudiat te Dominus (Psalm 20) equally suggest the old antiphon idiom. Portio mea is less varied in its scoring than Exaudiat te Dominus, and is chiefly notable for its astonishing ‘Amen’. It falls into two sections, each a trio building to a full choir of treble, mean, alto, tenor and bass. The ‘Amen’ which concludes the second of these is one of the repertoire’s most original explorations of the principle of the ‘false relation’ or dissonant third, built on a four-note figure which constantly turns in on itself. Although Exaudiat te Dominus, one of White’s most impressive works, does not employ the treble voice, it makes up for it with some imaginative and unusual redistribution of the voices. Beginning with a trio for mean, alto and bass (which culminates in the most ornamented of archaic cadential passages) the music proceeds to a five-part full section for mean, alto, tenor and two basses. This is in turn succeeded by a gimell for means and basses, and then a gimell for altos and tenors which moves by imitation into the final passage, now for seven voices MAATTBB, a summation of all the richness of scoring which has gone before.

The three remaining pieces show White writing in a more modern idiom, even though it is underpinned by a strong sense of tradition. In all three the almost syllabic setting of the texts allows for the use of close imitation; in all three the harmonic background moves faster than it did before. This is especially obvious in Regina caeli and the Christe qui lux es settings where the cantus firmus chant, quoted strictly throughout, is given in two-beat units instead of the more old-fashioned four. Regina caeli, a setting of the standard votive antiphon text, is a rare example in White of music for men’s voices only (AATTB with the chant in the second tenor). Christe qui lux es III and IV are both alternatim arrangements of the text, traditionally used as a hymn at Compline, which asks God for protection in the coming night. The first of the two recorded here (White wrote four in all) carries the chant in the treble part; the second quotes it in the tenor. For mastery of a restricted idiom, the polyphonic verses of these two settings must rank amongst the most sublime achievements of the century.

The five-part Lamentations (two separate laments customarily sung together) are consummate pieces of vocal architecture, the emotion carefully channelled in both halves towards the concluding phrase ‘Ierusalem, Ierusalem, convertere ad Dominum Deum tuum’. The power of White’s setting of these famous words has been apparent to those who have heard it almost since the day it was written: the scribe of the unique source of the work added (in Latin) at the end of his transcription: ‘Not even the words of the gloomy prophet sound so sad as the sad music of my composer.’

Cover artwork: The Man in the moon, medieval stained glass in the porch of St Mary's Church, Norfolk, photographed by Matthew Stevens