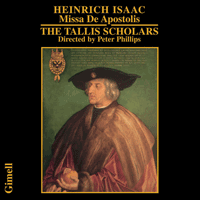 In the early years of the sixteenth century Isaac and Josquin were held to be on the same level of achievement: the two pre-eminent composers in Europe. This is the first recording of Isaac's six-voice Missa De Apostolis.

‘Musically and sonically this is among The Tallis Scholars' finest recordings. If you've been following the work of this excellent a cappella ensemble over the years, you know that the best Tallis Scholars recordings achieve the highest artistic and technical standards … this is challenging music for any choir, but these singers always seem to be unfazed and untouched by the many difficulties of ensemble singing experienced by ordinary mortals’ (CDReview)

It would be going too far to say that Heinrich Isaac (c1450–1517) is an unjustly neglected composer; yet his reputation is still confined to the limbo which contains so many of the leading figures of the Renaissance period. He is probably a little more performed than Philippe de Monte (1521–1603), a little less than Cristóbal de Morales (c1500–1553); but in the company of those few who were rated amongst the very best in their lifetimes, Isaac has much to prove to modern audiences. No one would think on current evidence to mention him in the same breath as his great contemporary and fellow-Netherlander Josquin des Prés (c1440–1521), yet in the early years of the sixteenth century they were held to be on the same level of achievement: the two pre-eminent composers in Europe.

If it became commonplace to treat Josquin and Isaac as a complementary pair, in the way that Lassus and Palestrina or Bach and Handel are, an instructive shift in emphasis would be achieved. No longer would Josquin be alone amongst the composers active around 1500 to have his music made available in inexpensive modern editions; perhaps the first monograph on Isaac would be written, bringing him out of the exclusive preserve of German-language scholarship; and perhaps the next edition of the New Grove Dictionary would give him more than the handful of columns which it publishes at the moment. But, most usefully, by comparing the styles of these two geniuses, a more solid background could be adduced against which to judge their work. For example, it tells us something important about Josquin’s view of composition that he tended to keep to four-part textures even in music for grand occasions, whereas Isaac preferred the greater breadth of five or six voices. The bulk of the music on this album is for six voices. As a result of his inclination for more intimate sounds, Josquin often constructed his contrapuntal lines of short motifs which he could combine in various permutations. Isaac, on the other hand, put greater trust in pure sound, and in doing so wrote longer spans of melody than Josquin: melodies which maintain a looser relationship to each other in the polyphonic ebb and flow. Nowhere is this more evident than in the supremely beautiful ‘Gratias agimus’ from the Gloria of the Missa De Apostolis. This collection of Isaac’s sacred music, then, represents a first attempt to open up the particular sonorities of one of the greatest masters of choral sound.

A comparison between Josquin and Isaac is anyway encouraged by the fact that they were both born in the Low Countries in the middle of the fifteenth century and spent much of their early careers in Italy. Isaac was in Florence by 1485 in the service of Lorenzo de’ Medici. His only other significant term of employment began in 1497 when he became court composer to the Emperor Maximilian I in Vienna, perhaps the most illustrious post available to a musician at that time. For the rest of his life he alternated between being resident in Vienna and Florence (though he never formally left Maximilian’s service), eventually coming to prefer the latter, where he died.

Isaac’s six-part Missa De Apostolis is based on a selection of Gregorian chants taken from the repertoire of the Feast of the Apostles. It will immediately be noticed that the music follows a number of the unusual and conservative liturgical procedures current in Germany and Austria around 1500, when this music was written. In particular a composer was expected to set the Mass in alternation between chant and polyphony, section by section and in every movement. This turns the Kyrie, for example, into a full invocation in nine separate sections. The chant duly carries straight through from the monophonic verses into the polyphony, appearing in all the different voice-parts at different times as a decorated cantus firmus. This process unfortunately breaks down in the Gloria where it proved impossible to rediscover the chant on which Isaac had based his music, and another one in the same mode had to be substituted. In addition the Credo was not set because it was not then customary to include it as part of the polyphonic Ordinary. In fact Isaac left a large body of separate polyphonic Credo settings, which presumably were used in contemporary services, but none was found to fit this particular chant and vocal scoring. Although his polyphonic sections are constantly being interrupted by statements of unadorned chant, Isaac managed to set his texts on the grandest scale. This unhurried breadth of effect is one of his most valuable artistic achievements.

Further illustration of this is provided by the two ceremonial motets which frame the remaining pieces on this recording. Optime pastor and Virgo prudentissima have a grandeur that no other Renaissance composer could rival. The spaciousness is achieved partly by the wide overall scoring of the voices, and partly by Isaac’s habit of holding the chant parts back for special moments, rather as Handel later rationed the use of the trumpets and timpani in his ‘coronation’ anthems. When the chant or chants enter (always in the middle two of the six voice parts), they do so with such solemnity that all the surrounding activity is quietened; and when they cease, the four outer voices immediately readopt faster-moving music. By alternating these two textures Isaac could build up to the final statements of the chant with an irresistible momentum.

Optime pastor was written to celebrate the meeting of Maximilian I’s Chancellor, Cardinal Lang, with the newly elected Pope Leo X in December 1513. This had especial relevance for Isaac since Leo was Giovanni de’ Medici, the son of Lorenzo the Magnificent his previous employer, and formerly one of Isaac’s own pupils. This first meeting of the Pope and the Chancellor was a political event of the highest importance, encouraging both Isaac and the unknown poet of the main text of the piece to strain every faculty for references and hidden meanings. The words, written in hexameters, include clever allusions: the ‘doctor’ of the opening lines is derived from the word ‘Medici’ through the Latin ‘medicus’; the ‘queen of birds’, which comes later in the first half, refers to the eagle in the imperial coat of arms; later still the ‘king of beasts’ is a pun on the lion or ‘Leo’, the Pope’s name. The librettist even sneaks in a reference to one of Maximilian’s main concerns of foreign policy – a war against the Turks. Isaac, for his part, undertook the doubly impressive task of setting his polyphony around two different plainchants, stated at the same time, each carrying texts relevant to the occasion, namely Da pacem and Sacerdos et pontifex. The chants are given complete in both halves of the motet, though, as was customary, this was done in diminution in the second part. Both halves end with the same words and similar music, the second statement splendidly extended into the most abstract pattern-music, a tribute to Isaac’s Flemish training.

Tota pulchra es and Regina caeli laetare are Marian motets, adapted from antiphons; while Resurrexi et adhuc tecum sum is a setting of the Introitus for Mass on Easter Sunday. All three are based on chant, and in all of them Isaac disposed these melodies between the different voice-parts at random, though always in notes slightly longer than the surrounding polyphony so that an acute ear can pick them out. In Regina caeli laetare and Resurrexi et adhuc tecum sum the contours of the chant also audibly influence the loose imitation with which the other voices commence, especially in the third and fourth parts of Regina caeli laetare. In Tota pulchra es, a supreme achievement, the technique is more intricate. In the first section the sopranos and tenors maintain a close dialogue which is almost canonic; but in the second this alliance breaks down, to be replaced by a looser framework. The rapt silences towards the end of the setting are balanced, at the beginning of the second section, by writing which is almost recitative: the altitonans voice (sung on this recording by a high tenor) describes delicate turns and arabesques, whilst accompanied by harmonized chant which sustains long notes around it.

Virgo prudentissima was probably composed in about 1507, when Maximilian I was laying plans for his coronation as Holy Roman Emperor. The plainsong Virgo prudentissima is the antiphon to the Magnificat at First Vespers on the Feast of the Assumption. The motet’s text, by the humanist Vadian, is founded on the hope that the Virgin will look mercifully on Maximilian, having received the intercessions of the three Archangels. The ‘Georgius’ mentioned in the second section was Jurij (Georg) Slatkonja, Maximilian’s Kapellmeister and later Bishop of Vienna. Just as in Optime pastor, Isaac maintains a strong stylistic difference between those sections which include chant and those without it, though here the contrast is more marked. The duets are longer and more lively; the long-note sections more massive because they move more slowly. The build-up to the end is typically impressive, capped by another abstract musical pattern: a pun on the solmization syllables taken from the final words of the text ‘ut sol’ (‘as the sun’), which in untransposed pitch was equivalent to the notes C and G respectively.