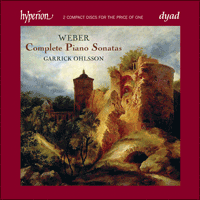 Weber, best known for his operas today, was also a very fine pianist and he wrote a sizeable body of piano music of which the four sonatas are the centrepiece. These are perhaps the first truly ‘Romantic’ piano sonatas and were a great influence on the succeeding generation of German composers such as Mendelssohn and Schumann; all are large scale and virtuosic and their quality makes it surprising how rarely they have been recorded. The set also includes the most important of Weber’s other piano works including the once hugely popular ‘Invitation to the Dance’, a work which has become better known in the orchestration of Berlioz.

‘These are distinguished performances, by a pianist of true romantic temper, of four works that have had more than their share of misunderstanding from performers and critics alike’ (Gramophone)

Garrick Ohlsson is the pianist, acclaimed for his performances of Brahms and Chopin on Hyperion. These delightful recordings were originally released on Arabesque.

‘[The sonatas] require a player with the fleetest of fingers, as well as an interpretative spirit that responds fully to the often flighty romanticism of Weber’s piano writing. Garrick Ohlsson meets these requirements in good measure, and his 1988 recordings, originally issued on Arabesque, make an attractive proposition in Hyperion’s two for the price of one reissue’ (The Irish Times)

What is important for the lucid ordering of the work—for its crystallization—is that all the Dionysian elements which set the imagination of the artist in motion and make the life-sap rise must be properly subjugated before they intoxicate us, and must finally be made to submit to the law: Apollo demands it. (Igor Stravinsky, Poetics of Music)

To the Russian master of modernism, the four piano sonatas of Carl Maria von Weber stood tall among the best-formed works of the nineteenth century. Citing their ‘instrumental bearing’, he praised them for exhibiting ‘the constant and alert control of the subjugator’. In this, Stravinsky recognized Weber’s achievement, as he crystallized his sonatas’ forms, in reconciling the Dionysian and Apollonian sides of art. Thanks to this opinion, to renewed interest generally in the early Romantic era, and to the talents of pianists such as Garrick Ohlsson, these works can be reassessed and fully appreciated, having been undervalued for most of the twentieth century.

Once deemed to be, next to Beethoven’s piano sonatas, ‘unquestionably the most important and valuable of the whole newer period, often even surpassing those in grandeur and make-up’ (A B Marx, 1824), Weber’s sonatas have suffered from their composer’s greater reputation as the founder of German Romantic opera. Der Freischütz (1820), Euryanthe (1823) and Oberon (1826) became so famous that musicians, critics and audiences almost lost sight of the composer’s symphonic works, concertos, songs, cantatas, masses and piano music. Weber’s shining sonatas, glittering variations, ebullient polonaises and delightfully written character pieces, in particular, were simply eclipsed. True, Weber’s Konzertstück for piano and orchestra (1821), did become a popular parade-piece with virtuosos, as did the piano solos Momento capriccioso (1808), and the Rondo brillante and of course Aufforderung zum Tanz, both from 1819 (though the last—perhaps the era’s first tone poem—enjoyed the boosts of regular performances by Liszt, beginning in 1828, and a sumptuous orchestration by Berlioz, from 1841).

By the time the first two of Weber’s piano sonatas appeared in print, his older contemporaries had already seen many such works published: seventy sonatas of Clementi, thirty-five of Dussek, twenty-seven of Beethoven and four of Hummel were already in wide circulation. Weber was twenty-six when he composed his Sonata No 1 in C major Op 24 in early 1812. The work’s technical demands were so extraordinary that despite the composer’s efforts to teach it to the talented dedicatee, his pupil the Grand Duchess Maria Pavlovna of Weimar, the lady could not master it. Part of the problem lay in the size of Weber’s hands. Julius Benedict, another pupil, wrote that they were ‘able to play tenths with the same facility as octaves’ and, further, that with them ‘Weber produced the most startling effects of sonority, and possessed the power … to elicit an almost vocal tone where delicacy or deep expression were required’. Hands of the sort that wrote the music were advantageous to its performance. The requirements include flashing scales and arpeggios, toccata-like double notes, daredevil leaps, driving rhythms and, musically, a sense of dramatic passion.

Written in reverse order, the four movements contain suprises at every turn. Forms, textures, colorations and other elements are contrasted and brought into balance with the virtuosity of a young master—orchestrating at the keyboard with a skill not unlike Beethoven’s. Most spectacular is the finale, dubbed by Weber L’infatigable but now better known by Alkan’s title for it, Perpetuum mobile. Its whirlwinds have never failed to sweep audiences off their feet. Intoxicated by the movement’s potential for elaboration, such composers as Czerny, Henselt, Brahms, Tchaikovsky and Godowsky made arrangements of it.

Weber began his Piano Sonata No 2 in A flat major Op 39 in 1814 and completed it two years later when he was thirty. Its composition was divided between Prague, where Weber was Kapellmeister of the theatre, and Berlin, where he moved with his fiancée, the soubrette Caroline Brandt, for her ‘star singing engagement’, and the Sonata was undoubtedly meant as a personal performing vehicle. Benedict tells us that the composer was ‘wrapped up in the love of his future partner for life’ when he wrote it. Certainly the work’s spacious, warm lyricism, intimate sentiment, woodland atmosphere and flowing modulations suggest greater personal maturity and a vastly different inner life than the extroverted deftness of the Sonata No 1. Movements one, two and four seem to share the special grace of human love while the third, Menuetto capriccioso, is a tour de force of delicious whimsy contrasted with heart-on-sleeve romantic gesture. To Benedict, Weber’s Op 39 was ‘the grandest and most complete composition of the master’ because of its ‘originality of form, deep pathos and poetical feeling’.

The Piano Sonata No 3 in D minor Op 49 also belongs to 1816, but shows its composer in a darkly dramatic, Beethovenian mood. Weber wrote it in just twenty days of feverish inspiration. Conceiving the work less as a composer-pianist and more as a composer-conductor, he explored new ways to develop his themes through counterpoint, used a broad range of tonalities and probed his instrument’s resources more deeply than before. All three movements seem imbued with orchestral sonorities and textures. No extra-musical connotations exist to colour the listener’s perception of this classically abstract, fascinating work. If Beethoven’s shadow seems to fall over each of its three movements, no one should be suprised. So odd was its originality that Weber’s cataloguer, F W Jähns, thought the Sonata ‘demonic’.

The Piano Sonata No 4 in E minor Op 70 was produced in 1822 after a three-year gestation period. Weber was thirty-six and smarting from a bad performance of his incidental music to Wolff’s Preciosa. Benedict claimed that: ‘The first movement, according to Weber’s own ideas, portrays in mournful strains the state of a sufferer from fixed melancholy and despondency, with occasional glimpses of hope which are, however, always darkened and crushed. The second movement describes an outburst of rage and insanity; the Andante in C is of a consolatory nature and fitly expresses the partly successful entreaties of friendship and affection endeavouring to calm the patient, though there is an undercurrent of agitation and evil augury. The last movement, a wild, fantastic tarantella, with only a few snatches of melody, finishes in exhaustion and death.’ Schubert seems more the model here than Beethoven, which may account for the work’s subtleties and lieder-like delicacy of expression. But Weber’s use of motifs rather than long-spun melodies and the restrained economy of the pianism involved evince greater expressive mastery and control than before. The Sonata is dedicated to J F Rochlitz, a critic who had praised the two preceding sonatas.

In the course of listening to Weber’s four sonatas, it becomes evident that a refining process was at work. The dazzling virtuoso of 1812 who penned the Sonata No 1 had gradually become, over the decade which separates that work from the last sonata, more reflective and less showy. By 1822 superabundant pianism occupied Weber’s mind hardly at all. Although the works continued to be difficult to execute, their challenges derive from the multiple strands of their counterpoint and a growing sense of quasi-orchestral texture. Weber’s genius lay in unifying form, content and expression with telling effect.

The Rondo brillante Op 62, also known as La gaîté, belongs to the same year, 1819, as Aufforderung zum Tanz Op 65. An excellent example of what has been called Weber’s ‘glass chandelier style’, the Rondo brillante’s crystalline brilliance exploits the piano’s upper treble range (and the pianist’s right hand) to great effect. Exuberant, even breathtaking, it is a true showpiece by a virtuoso who, at thirty-three, was in the full flush of love for Caroline Brandt, whom he had married two years earlier.

Less dazzling but musically more substantial, the perennial favourite Aufforderung zum Tanz evokes, as Weber tells us, a ball. A dancer approaches a lady, who evades him. He presses his invitation and she relents. They converse sympathetically, take their places for the dance, then swirl happily away. At the end, they thank each other and withdraw—leaving only silence and the memory of an exhilarating experience. The work’s terpsichorean charms inspired later versions for the piano, both increasingly elaborate, by Tausig and Godowsky, as well as a ballet made famous by Nijinsky, The Spectre of the Rose.

The pleasure of hearing this music today derives in general from its marked individuality and freshness of invention, from its daring inspiration and superb pianism, but more particularly from Weber’s adroit imagination in harmonizing the conflicting demands of both Dionysus and Apollo. Stravinsky was right—and not mere craft but art is the result.