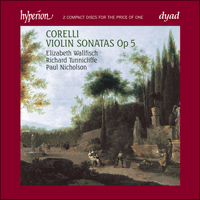 ‘The recording is intimate, the performance full of wit and nuance—coquettish delays at cadences, flexible tempi that never lose a sense of dancing pulse. Although such an archival collection is meant for dipping into, I found myself listening to the complete discs in two sittings’ (BBC Music Magazine Top 1000 CDs Guide)
‘Nothing short of a revelation. I can honestly say that I have never heard these sonatas so imaginatively performed, nor so stunningly executed as on this beautifully recorded pair of discs. A splendid achievement all round’ (CDReview)

Arcangelo Corelli was born in Fusignano, Italy, on 17 February 1653, the youngest child of a wealthy landowner. His musical studies took him first to the local towns of Faenza and Lugo, and then, when he was about thirteen, to the nearby city of Bologna, one of the most important musical centres of the time. Corelli lived in Bologna, studying the violin and composition with local musicians, until he was about twenty when he seems to have settled in Rome. He is first recorded there in 1675 as a junior member of a Lenten oratorio orchestra. Corelli’s progress in Roman musical society was rapid. By 1679 he was playing a prominent role in ad hoc church orchestras, and had entered the service of the most glamorous patron of the time, the exiled Queen Christina of Sweden. His first published collection, his Opus 1 trio sonatas, was dedicated to Christina.

As far as we know, Corelli remained in Rome for the rest of his career, though stories circulated in the eighteenth century that he had travelled to Germany, France, Spain and even England—he supposedly reached Rochester on his journey to London when he heard that Henry Purcell had died, whereupon he returned home! Corelli was immensely influential in northern Europe from the 1680s onwards, but in reality he was known almost exclusively through his published collections: three subsequent sets of trio sonatas, Opp 2, 3 and 4, appeared in 1685, 1689 and 1694, and they were followed by the subject of this recording, the Sonate a violino e violone o cimbalo, Op 5, of 1700. His last work, the Op 6 set of concerti grossi, was published in Amsterdam in 1714. Corelli died in Rome on 8 January 1713 and was buried in the Pantheon.

Corelli occupies a crucial position in the history of Western music, not least because he is the earliest composer whose major works have never passed out of the repertory (and therefore have never had to be revived), remaining continually in print since they first appeared. Opp 1 to 6 continued to be reprinted in increasingly debased versions throughout the eighteenth and early nineteenth centuries until these were superceded by the 1871 collected works of Joachim and Chrysander, the first scholarly modern edition. Op 5 was undoubtedly the most popular of his collections. It was reprinted more than fifty times in the eighteenth century in ten European cities, and music from it appeared in many guises, ranging from simple adaptations for keyboard and recorder to Geminiani’s concerto grosso elaborations.

Corelli’s sonatas achieved their enormous popularity in the eighteenth century in part because they presented the Italianate style of his time in its most polished and classic form. When Charles Burney visited Rome he was told that Corelli had spent three years revising and editing them for the press, and the example of Op 6 suggests that some of them go back to his youth. We know from his German pupil Georg Muffat that some of his concerti grossi were in existence by 1682. Similarly, he had composed at least one violin sonata by 1679, when he promised to send it to a member of the Florentine court. The fact that so little authenticated music by Corelli survives outside his printed collections suggests that he was concerned to allow only his best music to circulate, released only after repeated revisions.

To judge from the many imitations written by northern European composers around 1700, the most influential element of Corelli’s style was his harmony. His sonatas popularized the idea, revolutionary then but commonplace to later generations, that movements should modulate in a logical pattern to closely related keys such as the dominant and the relative minor. The lack of such a scheme made the chamber music of even the best of his German and English contemporaries, such as Biber and Purcell, seem aimless and confused by comparison. Corelli also showed his contemporaries that modulations could be elegantly achieved by sequences moving up and down by step, and that sequences were the ideal framework for virtuoso passagework. Equally important, he popularized the use of biting dissonances to propel the music forward, typically over a running bass as in the fugue of Sonata No 1 or the Tempo di Gavotta of Sonata No 9. Again, English and German composers were familiar with sevenths and ninths, but tended to use them to colour the music rather than to give it direction.

Corelli was less forward-looking in matters of form. Sonatas 1 to 6, commonly but misleadingly called ‘church sonatas’, still bear traces of the multi-section ‘patchwork’ designs of the early seventeenth century. All of them have at least five major sections, divided in the original edition only by double bars, and No 1 has no fewer than ten changes of pace in only six-and-a-half pages of music. Three of the so-called ‘chamber sonatas’ in the second part of the collection—numbers 7, 8 and 10—are simple suites, with three or four dances following an ‘abstract’ prelude; they are probably earlier than No 9, which has a chromatic Adagio between the Giga and the Tempo di Gavotta, and No 11, perhaps the last in the set to be written, which has only one named dance—a concluding Gavotta.

Sonata No 12, the famous ‘Follia’ or ‘La Folia’, belongs to a tradition of violin variations on chord-sequences that goes back to the generation of Salamone Rossi and Biagio Marini. It has its origin in a wild sixteenth-century Spanish dance, and is related to the Renaissance ground bass ‘La Gamba’ which is essentially ‘La Folia’ minus the first chord. Later settings by composers ranging from Vivaldi to Rachmaninov were nearly all inspired by Corelli.

An important element of the continuing popularity of Corelli’s Op 5 was the tradition of using it as a vehicle for improvised or written-out ornamentation. For information on this subject I am indebted to Neal Zaslaw who has prepared an edition of the surviving sets of ornaments. The most famous of them—florid versions of the slow movements of Sonatas 1 to 6—appeared in Amsterdam in 1710, when the publisher Roger claimed that they were ‘composed by Mr A Corelli as he plays them’. Some musicians were dubious about their authenticity (the English writer Roger North wondered how ‘so much vermin could creep into the work of such a master’), so Roger responded in an advertisement of 1716 by offering to show anyone who wanted to see them ‘Mr Corelli’s original, with his letters written on this subject’. Opinions have been divided on their merits ever since, but they certainly seem to be the sort of thing that a good Italian violinist of the time would have played, and they are largely followed on this recording.

Later violinist-composers from Geminiani (a Corelli pupil) to Francesco Galeazzi (1758–1819) wrote ever more elaborate versions, and some began to write variations on the fast movements of Sonatas 1 to 6 as well as many of the movements in Sonatas 7 to 11. Two examples can be heard on this recording. The decorated repeats of the Preludio of Sonata No 9 come from Cambridge University Library Add MS 7059, an English source probably of the 1730s or ’40s, while Sonata No 9 is repeated in its entirety in the complete elaborated version by Geminiani, which was included in Sir John Hawkins’s General History of the Science and Practice of Music (London, 1776). Hawkins wrote that it was written ‘as Geminiani used to play it, and copied from a manuscript in his own handwriting’, adding that it was ‘the best specimen that can be given of the style and manner of his [Geminiani’s] execution’.