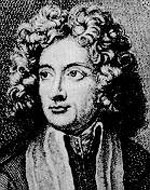 born: 17 February 1653
died: 8 January 1713
country: Italy
Arcangelo Corelli was born into a wealthy family in the small Italian town of Fusignano in 1653. His musical studies began in earnest when he moved to Bologna in 1666; four years later he was admitted to the Accademia Filarmonica there. By 1675 he was in Rome, where the young ‘Arcangelo bolognese’ became known as a rising star among the fine violinists of the city. He regularly performed at the highly elaborate church services that were major musical attractions in Rome, as well as frequently taking part in oratorios and operas. In about 1679 he entered the service of the exiled Queen Christina of Sweden as a chamber musician. To this remarkable lady, a discerning music-lover who had abdicated her throne and embraced Roman Catholicism in 1654, Corelli dedicated his first printed collection of trio sonatas (Op 1, 1681).

In 1684 Corelli took over the responsibility of providing the orchestra for the powerful Cardinal Pamphili; two years later he was officially engaged as the Cardinal’s master of music and took up residence in his palace. Corelli, his favourite violin pupil Matteo Fornari and the cellist G B Lulier (also a composer) regularly performed with the harpsichordist Pasquini and as concertino soloists with the Cardinal’s orchestra.

The Spaniard Lulier and Corelli frequently collaborated in the production of oratorios, Lulier providing the vocal music and Corelli the sinfonias. One such collaboration was S Beatrice d’Este, performed in Roma and Modena in 1689.

When his patron Pamphili moved to Bologna in 1690, Corelli was taken up by the young Cardinal Ottoboni and took part in the famous academies held in the Ottoboni Palace every Monday evening.

The large musical establishments of his wealthy patrons gave Corelli the chance to develop his best-known and most influential works, the orchestral concerti grossi. Although they were sometimes performed by enormous orchestras of over a hundred players, these were probably originally played by a domestic ensemble of about fifteen musicians. But they were never published in his lifetime, even though at his death in 1713 Corelli had just put the finishing touches to an edition of twelve. In his will he left the plates to his constant disciple Fornari who issued them in 1714 as Corelli’s Op 6. For many years afterwards they were solemnly performed at the Pantheon, Corelli’s burial-place, on 8 January, the anniversary of his death.

Corelli was one of the most sought-after violin teachers in Italy—his distinguished pupils included Castrucci, Gasparini, Geminiani, Bonporti and Locatelli—and the set of violin sonatas he dedicated to Electress Sophia Charlotta of Brandenburg (Op 5, 1700) were landmarks in the history of violin playing.

from notes by Tim Crawford ©