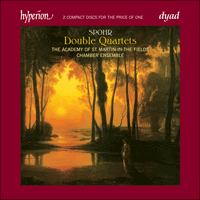 Spohr’s Double Quartets are of an exceptional order and deserve a secure place in the repertoire of supreme examples of Romantic chamber music. These recordings, originally issued in the early 80s, have given much pleasure to countless listeners and they will now enjoy a new lease of life in this new bargain version.

Louis Spohr (born Braunschweig 1784, died Kassel 1859), was one of the most influential and respected musicians of his time. Enthusiastic concert notices following his debut as a virtuoso violinist in two of his own concertos at the Leipzig Gewandhaus in 1804 secured for him the post of Konzertmeister at the small but ‘enlightened’ court of Gotha. Between 1805 and 1812, with a small but accomplished orchestra at his disposal, Spohr wrote his first significant works: the Fifth Violin Concerto, the Concertante for two violins and orchestra (Op 48) and the first two clarinet concertos. A natural gift for broad, flowing melody and a flair for orchestration were soon apparent in a style whose increasingly rich harmonic flavour imbued his music with a mild, wistful Romanticism. His reputation quickly spread in Germany, the result of extensive concert tours with his harpist wife, Dorette, and in 1811 he was called upon to direct Germany’s first music festival at Frankenhausen. From this period of growing self-confidence date the first immature string quartets and operas, the first symphony and an oratorio.

Spohr had long desired to work in Europe’s musical capital, Vienna, and his appointment there as Orchesterdirektor of the Theater an der Wien from 1813 to 1815 initiated an important period of creative activity. In Vienna Spohr completed his first successful opera, Faust, and wrote two of his most enduring and characteristic works, the Nonet (Op 31) and the Octet (Op 32). Of deeper significance was the new seriousness of purpose which pervaded the Op 29 Quartets and the Seventh Violin Concerto, Op 38, the result, perhaps, of his personal acquaintance with Beethoven.

The next few years were hectic and varied as Spohr toured extensively through Germany, Switzerland, Italy and Holland. From 1817 to 1819 he was Kapellmeister at Frankfurt where he produced his opera Zemire und Azor. In 1820 he made the first of six visits to England, where his prestige remained high until the end of the century, and Paris, where he met one of his idols, Cherubini.

The summit of Spohr’s career was his appointment as Hofkapellmeister at Kassel in 1822, a post he held until his retirement in 1857, during which time he wrote arguably his greatest music. The first twelve years at Kassel were particularly rich in fine works: the opera Jessonda, the oratorios The Last Judgment and Calvary, the Third and Sixth Symphonies, the String Quartets Opp 68 and 74, the String Quintet Op 69, and the first three double quartets.

During the 1830s Spohr suffered three severe personal blows with the deaths of his violinist brother, Ferdinand, his first wife, Dorette, and his youngest daughter, Therese. His personal éclat was at its highest during the 1840s, a time when his music was beginning to seem conservative by comparison with the younger Romantics Berlioz, Schumann, Liszt and Wagner. Furthermore, his position at Kassel became increasingly arduous, his every endeavour put in jeopardy by the indifference and petty restrictions of the court. Only a few inspired works enliven this period: the Fourth Double Quartet (1847), the String Sextet (1848) and the Septet (1853). Sadly, Spohr’s last years were tinged with disillusionment and bitterness concerning the state of music and the political future of Germany, and frustration at no longer being able to create music of a quality to match his own high ideals.

To his contemporaries, Spohr was a standard-bearer of pure German art and a revered link with the age of Haydn and Mozart. A progressive and innovative conductor, his example helped to popularize the use of the baton; he unselfishly introduced the works of his contemporaries into his concerts, was a notable interpreter of Beethoven’s large-scale works, a supporter of the young Wagner and a prime mover in the Bach renaissance. Spohr taught over two hundred pupils from all over Europe, and his Violinschule (1831) laid the foundations of modern violin technique. He was the supporter of countless musical societies, a Freemason, an idealistic Liberal Democrat who passionately desired the unification of Germany, and one of music’s greatest travellers.

In his autobiography, Spohr recalled that it was the highly regarded violinist and composer Andreas Romberg (1767–1821) who first proposed the idea of a double quartet ‘the last time we played together before he died’. Spohr held Romberg in some esteem—he was Spohr’s successor at Gotha—and dedicated his String Quartets, Op 29, to him. He may even have examined the older composer’s own sketches for an unfinished double quartet. Spohr’s enthusiasm for this ‘ideal’ medium was unbounded and he was confident in pioneering ‘a wholly new kind of instrumental work’. He was especially attracted by the prospect of utilizing the richer textures that would inevitably result from the subtle antiphonal interplay between two equal, yet independent, quartets. In fact, Spohr had recently explored these possibilities ‘vocally’ in his Mass for two choirs, Op 54 (1821), and would do so again, with arguable success, in his Seventh Symphony, Op 121, for two orchestras (1841). However, the concept of two quartets sharing the musical argument as equal partners was only gradually developed throughout the four double quartets, and only completely realized in the Fourth. The first two works in particular concentrate Spohr’s characteristic concertante brilliance exclusively in the ‘first’ quartet, whilst the ‘second’ quartet performs an accompanying role.

The First Double Quartet was written during March and April 1823, and was published as Op 65 two years later. Spohr’s London friend the organist, composer and conductor of the London Philharmonic Society concerts, Sir George Smart, was present at a performance of the work whilst on a visit to Kassel in November 1825, and wrote in his journal: ‘The quartet took 28 minutes […] The effect was good. Spohr played beautifully. It is very difficult for the four principal instruments.’ He also noted the seating arrangements which emphasized the concertino/ripieno relationship between the two quartets: two separate groups, the first violin and cello in each group facing each other. Spohr was delighted with the reception given to his First Double Quartet, and flattered when a young composer, Louis Pape, later Hofkomponist at Oldenburg, sent him a double quartet of his own.

The Second Double Quartet was written in December 1827 and Spohr made a conscious effort to treat the two quartets more equally. Although there are dazzling solo passages, particularly in the opening ‘Allegro vivace’ and the finale, the overall style is less brilliant. This is music that needs no analysis to support it. It would be difficult to resist the warm, rich melodiousness of the first movement: the rather severe ‘eighteenth-century’ Menuetto with its melting Trio, a duet for violin and viola; the elegant ‘Larghetto con moto’ with its striking pizzicato passages for the second quartet, or the finale’s breathless verve, one of Spohr’s jauntiest inspirations.

The Third Double Quartet, in E minor, was composed during December and January 1832/3 and, following the usual practice, was first given at one of Spohr’s regular string quartet circles. Perhaps it was this work that Sterndale Bennett heard at a similar soirée in Kassel in 1842: ‘I never heard such playing in my life. He [Spohr] is now nearly sixty years old, but has the greatest energy.’

The grave melancholy of the opening ‘Adagio — Allegro’ pervades much of this predominantly lyrical work, but is partially relieved by the dazzling virtuosity of the ‘Andante con variazioni’. The underlying tension, reflecting perhaps the emergence of a deep-rooted despondency in the composer caused by growing disillusionment with his position at Kassel, reappears in the form of restless agitation in the Scherzo. The mood changes in the trio (tonic major) as the breezy, wide-ranging melody is tossed from instrument to instrument in the ‘first’ quartet with striking virtuosity. A new mood of resolute optimism appears in the Finale which even the minor-mode second theme, with its insistent triplet figure, cannot dispel.

The Third is arguably the finest of the series, but the Fourth Double Quartet, in G minor, written during April and May 1847, most closely matches Spohr’s original conception of the medium. The freshness of invention often lacking in Spohr’s works from the 1840s and onwards is to be found here in full measure. A high level of inspiration is maintained throughout the entire work which is notable for its extraordinary textural richness, rhythmic vitality and ingenious ‘echo’ effects between the two quartets.

With the exception of the Nonet, Op 31, and the Octet, Op 32 (both recorded on Hyperion CDA66699), Spohr’s chamber works have not enjoyed wide circulation in our century. His string quintets and sextet, piano quintets and trios and thirty-four string quartets contain hidden riches but are largely unknown. Only the violin duets have always retained the respect of musicians and musicologists. In any final assessment, however, the double quartets must be reckoned to be of an exceptional order and deserve a secure place in the repertoire of supreme examples of Romantic chamber music.