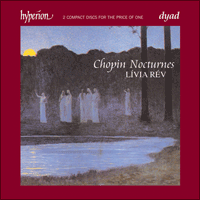 The first compositions that were to bring Chopin outright success were the Nocturnes and Waltzes. Whilst the latter’s foot-tapping appeal is understandably direct in terms of salon audiences, the Nocturnes pursue a more varied course. The title of these ‘night pieces’ was adopted from the works of the Irish composer-pianist John Field (1782–1837). Whilst the Nocturnes of Chopin leave those of the Irishman far behind, the famous E flat Nocturne of Chopin’s Opus 9 is almost embarrassingly similar to one by Field in the same key. The Nocturnes are here recorded in chronological order of composition.

Though published posthumously as ‘Opus 72’ the E minor Nocturne actually dates from 1827, when the composer was seventeen. As might be expected in so early an essay in the new form, the structure and invention is relatively simple compared to the grand inspirations which were to come.

Another early work, published posthumously in 1875, the Nocturne in C sharp minor of 1830 is often known as the ‘Lento con Gran Espressione’ after Chopin’s tempo indications, though its early publishers variously titled it ‘Nocturne’ or ‘Reminiscence’. The piece was dedicated to Chopin’s sister. It opens with a passage of six chords repeated twice, after which the piece takes a simple A–B–A form. The first twenty bars consist of a typically Chopinesque cantabile melody over an arpeggiated accompaniment. The central section is interesting and unique in Chopin’s output in that its material is based on two works Chopin had just completed—the F minor Concerto and the song Zyczenie. This section exists in two versions in the sources. The first autograph has the Concerto quotations played by the right hand in their original 3/4 time signature at double the bar rate to the Nocturne’s 4/4 signature which continues in the left hand. This ‘avant-garde’ polyrhythmic practice was unheard of in Chopin’s day and in later copies he appears to have sanctioned a rhythmic simplification. However, in this recording it is the original which Lívia Rév plays. The work is concluded by a return to the opening material, though this time in a highly ornamented form.

Chopin’s first three published Nocturnes, Opus 9, are dedicated to Madame Camille Pleyel and date from 1830/1. Camille Pleyel was a wealthy piano manufacturer who invited Chopin to accompany his wife, Marie-Félicité, and himself to London in 1837. They visited such tourist centres as Hampton Court and Richmond and also went to Brighton. It was Marie-Félicité who had the reputation of finding men irresistible and with whom Berlioz had at one time been in love. The English excursion was plagued by poor weather about which Chopin complained much, but he was most impressed by the wealth, space and trees that he observed.

The first Opus 9 Nocturne, marked ‘Larghetto’, is a gracefully proportioned piece which immediately establishes the style of ornamented melodic writing that is such a feature of Chopin’s Nocturnes. The second of the group is in E flat major and has become one of the composer’s most famous miniatures, though its importance does not truly extend beyond the salon. The third Nocturne, in B major, is particularly note­worthy for the delicate ornamentation of its melody. It has a central Agitato section to contrast with its Andante outer paragraphs.

The three Nocturnes which form Opus 15 honour Ferdinand Hiller (1811–1885) by their dedication. Hiller, a celebrated pianist, was a friend who introduced Chopin to Mendelssohn. The first of Opus 15 dates from 1830/1 and already reveals Chopin’s growing assurance and independence. Unusually, it bears a double time signature of 3/4 and 9/8 and is marked ‘Andante cantabile’ for its outer sections, and ‘con fuoco’ for its stormy middle section. Chopin achieves a marvellously cool mood in the Andante sections, a considerable contrast to the voluptuous tenor of the succeeding F sharp major Nocturne composed at the same time. Here the perfumed salon atmosphere is recreated in the outer Larghetto sections which enclose a ‘doppio movimento’ of considerable passion. The last of the set dates from 1833 and is a strange piece containing a central chorale of extreme simplicity. It is in G minor and marked ‘Lento’.

With the two Nocturnes of Opus 27 (1835) Chopin reached a new level of inspiration. They are dedicated to Madame la Comtesse d’Appony and the first, in C sharp minor, is marked ‘Larghetto’. Already in the third bar a major–minor equivocation sets the atmosphere of this delightfully mysterious piece, enhanced in its outer sections by a wide-ranging bass that adds to its nocturnal effect. A more complex middle section, part of which is in A flat major, adds further distinction to an inspired piece of piano writing. The Nocturne ends with a coda in the major. The second of Opus 27 is in D flat major and finds Chopin, as in the preceding Nocturne, totally sure of himself. Here all is serenity, and the lightly perfumed melody is tastefully decorated and ends with a coda of novel distinction.

The two Nocturnes of Opus 32 (1836/7) are of no special interest, though the first, in B major, has a fascinating ending. The A flat major Nocturne that follows makes interesting use of 4/4 against 12/8 in the sections which flank an angry central episode.

Very little is known of the C minor Nocturne which exists only as an autograph copy and a sketch. The piece was only ‘discovered’ and published in 1938 and there has been some dispute regarding its date of composition. Some commentators have regarded it, on stylistic grounds, as an early work. However, it now seems fairly certain to have been written in 1837 and Maurice Brown has suggested the piece was originally intended for the Op 32 set but later rejected by Chopin.

The first of the pair of Opus 37 Nocturnes is in G minor and in it Chopin includes a chorale-like central section. It was written in 1838. The second, in G major, dates from the following year and is of more interest, particularly for its uncompromising use of modulation; only some fifteen per cent of the piece is in the tonic.

The C minor Nocturne, Op 48 No 1, begins in a manner normal for its type, but is transformed in its second section with an imposing chordal episode of considerable grandeur. A further surprise is the final section, in which the opening melody is presented ‘doppio movimento’, thereby completely transforming the subject. The second piece which completes the 1841 Opus 48 is of less importance, and reverses the process of its companion by beginning and ending with an Andante, and having a central ‘molto più lento’ section. Once again in this piece Chopin employs the rhythmic complication of two against three.

The next pair of Nocturnes, Opus 55 (1843), are in F minor and E flat minor and are dedicated to Chopin’s Scottish pupil, friend and admirer, Jane Stirling. The first does little to stir the blood though the E flat major example is a fine piece of piano writing. It formally forsakes the usual ternary structure and employs a middle voice to enriching effect.

Chopin’s Opus 62 of 1846 contains the last Nocturnes to be published in his lifetime. The first, in B major, is quite remarkable both for its harmonic scheme and for its use of ornamentation. Like its C minor predecessor of Opus 48 it really goes beyond the bounds of what may be expected from a piece titled ‘Nocturne’. Its companion in E major is less distinguished, though the central episode is cunningly introduced and reappears, after the recapitulation, as a coda.

Chopin’s Nocturnes provide a fascinating insight into a developing genius. The great Polish master may have been influenced by Hummel’s elegance, by Rossini’s flowering cantilena and Mozart’s artful simplicity, but in the end he must be accounted a true genius of striking originality.