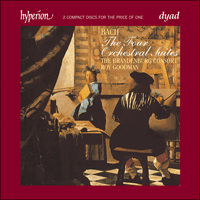 The French Overture reached the states of Germany through performances of the Tragédies lyriques by Lully during the mid-1670s. Already before 1700, both in France and elsewhere, an ouverture was expected to consist of more than two sections or movements, rather than simply a series of challenging flourishes followed by a lighter, continuous, imitative section, although this remained the norm as far as the work’s opening was concerned.

The four preserved ensemble Ouvertüren by Johann Sebastian Bach, which were apparently completed in Leipzig between 1723/4 and 1739, are all effectively suites with an opening overture movement in three sections. The remaining movements give each suite its own particular character. It does seem likely that early versions of Ouvertüren 3 and 4 (BWV1068 and 1069), which probably excluded trumpets and timpani, have been lost; probably further Ouvertüren existed but, although there seem to be traces of some of these (for example, in the opening sinfonia to the Cantata 119), there is too little preserved material for them to be reconstructable. Around 1730–32, incidentally, Bach and his assistants also copied out a number of further overture-suites by his own relations and probably others, presumably for performance at the concerts of the student concert-club or Collegium Musicum which had, since Easter 1729, been under Bach’s direction.

The remaining movements played in this recording were all composed as sinfonias (preludes) to vocal cantatas, although BWV209/i comes from an Italian-texted secular cantata from around 1731; it is an extremely tasteful movement, logically designed to demonstrate Italian musical influence. BWV1045 appears to be a completed concerto-style opening movement to a late-ish lost cantata (from about 1730); it seems to be in a newer style of composition than the preserved Cöthen works for violin and orchestra, but may have been drawn from a previously existing solo violin concerto with lighter scoring. Cantata 29 (‘Wir danken dir, Gott, wir danken dir’, from August 1731) opened with a delightful little movement for organ and festive orchestra which the composer had most ingeniously adapted from the violin solo prelude to the third unaccompanied Partita in E major, BWV1006—a certain Cöthen original, and arranged here in notation one tone lower. The sinfonia to Cantata 42 (‘Am Abend aber desselbigen Sabbats’), composed for 8 April 1725, is a charming but active movement for Bach’s basic orchestra of oboes and strings, which was presumably designed to prepare the listening congregation for the description of the appearance of the risen Christ to the disciples who had just assembled and locked themselves into a room.

For a short while around 1960 it was believed that the highly effective Suite No 1 in C major, BWV1066, was probably spurious, and even so dependable a scholar as the late Karl Geiringer expressed reservations regarding it. Fortunately these doubts have now been put to rest since the identification of the main scribe of the earliest preserved parts—C G Meissner of Gotha—has rendered its attribution to Bach unquestionable. Meissner was one of Bach’s most active copying assistants, and his manuscript is datable to 1723/4.

This composition seems deliberately to reflect the more traditional styles of French dance movements, such as had been included originally by Lully, and also, perhaps significantly, by Bach’s once-removed cousins Johann Bernhard and Johann Ludwig, whose own Ouvertüren Bach was later to have copied in parts for performance in Leipzig; perhaps he owned scores of these already.

In any event, after the tripartite ouverture (in which part 3 is effectively a continuation and conclusion to part 1), there follows a courante (by the 1720s a completely archaic dance, although still a feature of keyboard and other instrumental music), followed by pairs (marked alternativement) of gavottes, minuets and, finally, passepieds. The strong resemblance which the musicologist Peter Holman noticed some years ago between the main theme of the two gavottes and the four-voice sacred song ‘Dir, dir, Jehovah, will ich singen’ which the composer himself wrote into his wife Anna Magdalena’s second music album around 1725 can hardly be a coincidence; it is believed that the song itself is one of Bach’s own compositions.

Suite No 2 in B minor, BWV1067, for flute and four-part strings with continuo is almost certainly Bach’s latest preserved example of this genre, although it is possible that the surviving set of Leipzig parts, with flute and viola in the hand of Bach himself, is copied from an earlier score, or one which had been adapted recently from a lost earlier version. However, on stylistic and other, historical, grounds it seems improbable that this popular suite was composed before the 1730s, and the actual use of the flute in the music would, even in 1737 or later, have been up-to-date even in Paris.

The overture movement has been described as portraying opposing extremes, with the outer sections langorous and even mournful, whilst the bubbling central portion is active and full of the joy of life. Even if these interpretations, based as they must be on operatic vocal music, might have surprised Bach, the balance achieved by this contrast seems to be a part of the essential spirit of nearly all of his instrumental music. One interesting detail is the fact that the second slow section of this movement seems to transform the opening one, which is clearly in common time, into an even more expressive version of itself in triple (3/4) time.

The dances are all absolutely delightful—and also extremely original in each genre. The sarabande makes eloquent use of the (by 1740) quite orthodox notion of following the melody in canon with the bass line; the polonaises may be based on a real Polish dance, which is exchanged between treble and bass in a distinctly different way, and the minuet may possibly have been intended to be playable with the badinerie as its companion alternativement. Played that way, with the minuet ending the work, the substitution of triple for duple measures and the contrasts of character from the opening movement receive an effective reflection, but there is absolutely no evidence of this in what is otherwise a very clearly transmitted set of parts.

The Suite No 3 in D major, BWV1068, is probably Bach’s earliest ensemble suite with a French overture, although we have no evidence to indicate—as has often been stated—that any of these works was composed before Bach’s arrival in Leipzig late in May 1723. Somehow this work, originally tender and intimate in its address, seems to have been transformed totally through the addition of the brass and drum choir, even though this has been very cunningly done; an ingenious detail is the change from repeated notes to rising arpeggio in the first trumpet part at the return to the opening metre in the overture movement. Easily the most famous movement here is the exquisite quartet movement which forms the air; the wonderful thing is the way in which Bach turns a number of commonplace techniques (for example, the ‘striding bass’) to magical effect by his exact manner of combining them; there are beautiful moments in all of the parts. The only pair of alternating movements here are the gavottes, which somehow have a pastoral character before the brass are added, and a hunting style with the trumpets and drums. In courts influenced by French taste, the gavotte would be almost as much of a favourite as the minuet. The bourrée seems to demand a performing speed that is even faster than usual; this movement is another where the trumpet and drum contributions have been very discreetly added, so as nimbly to punctuate or to emphasize the thematic character of the dance. The final gigue is something of a swaggering affair, possibly also intended as a hunting movement. Its style is not that distant from that of the rondo themes of the hunting-finales with which Mozart would, over sixty years later, adorn his horn concertos.

Suite No 4 in D major, BWV1069, has an opening whose echoing rhythms, held notes and periods of silence seem to illustrate the outdoors, even when the music is heard inside a building; the contrasted central section of the overture movement is much more of a bustling affair. If the opening represents some spectacular royal event, such as a parade, then the central portion must surely represent the reaction of the admiring crowd. If this seems far-fetched, we must remember that the French overture had originated in the music accompanying the entrance of the sovereign at the start of a production—usually, then, of a ballet. The following pair of bourrées gives scope for the display of the wind instruments, both in dialogue with the strings in the first and with their seeming light approval in the second. The gavotte is unusual in that the line which emphasizes the steps of the dance is the bass line; the material is shared during the later centre of each repeated section, but throughout the melodic line of the violins seems to question, rather than to reinforce, the predictable character of the titled dance. The two minuets, during which Bach tactically withdraws the added trumpets to produce a more brilliant effect later, have a somewhat more intimate character; in the first, the oboes and bassoon double the strings throughout, whereas in the second, played alternativement, the strings play alone. This scoring may have been designed to reflect the traditional character of the French minuet as Bach understood it. The final réjouissance must for today’s English listeners point forwards to the similarly titled movement of Handel’s Music for the Royal Fireworks. Bach’s réjouissance here leads us to wonder whether perhaps the original version of BWV1069 may not itself have been intended to be played as an accompaniment to some ballet or mime depicting a contest or a battle of some kind.