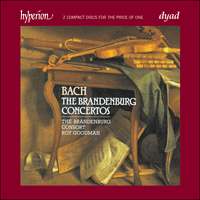 ‘The musicianship of these players is remarkably infectious, engaging and communicative as well as brilliantly accomplished’ (CDReview)
‘I can think of no performances which communicate such a sense of freshness and sheer enjoyment … superb … bouquets all round. A clear winner’ (CDReview)
‘This splendid set is a dazzling companion to The Brandenburg Consort's recording of the Bach Orchestral Suites’ (CDReview)

From 1717 to 1723 Johann Sebastian Bach was employed as Kapellmeister in the service of Prince Leopold of Anhalt-Cöthen—a period of great musical happiness for both men. The prince, who was nearly ten years younger than Bach, was a great lover of music: he could sing bass and play the violin, viola da gamba and harpsichord. At the age of twelve he had persuaded his mother to engage three musicians, and by the time of Bach’s appointment eleven years later there were eighteen. Leopold and his family were Calvinist and therefore required very little music for the services held in their small private chapel. Accordingly, apart from some cantatas for birthdays and the New Year, Bach composed mainly instrumental music at Cöthen, including these six concertos which were first described by Bach’s second biographer, Philip Spitta, as the ‘Brandenburg Concertos’.

Cöthen is a small provincial town in eastern Germany, about twenty-five kilometres from the Leipzig–Berlin motorway. The last offspring of the Anhalt-Cöthen tree was Duke Heinrich, who helped to develop the town as an important railway junction and died in 1847. Nowadays Cöthen is an industrial centre, visibly affected by the burning of coal and by the sad neglect of the former communist regime in the German Democratic Republic. Although restoration work is in progress, little is left of the original splendour of the castle. A communist prison in the main courtyard has recently been demolished, and naturally the interior decor and design has changed over the centuries. The Thronsaal (Throne Room) where Prince Leopold organized his Sunday evenings of chamber music has become a Spiegelsaal (Mirror Room) dating from 1822. Nevertheless it is a remarkable and large oblong room with a fine acoustic and it is here that many of Bach’s instrumental works must have received their first performance. (It was in this room that the Brandenburg Consort was delighted to be able to make a film of the ‘Brandenburg Concertos’ in March 1992.)

On 6 November 1717 Bach was put into prison. He was employed as Konzertmeister at Weimar and had hoped to become Kapellmeister to Duke Wilhelm Ernst after the death of J S Drese in 1716. He was obviously most upset to discover that the services of Telemann were being sought first (a fate he would suffer again in Leipzig six years later) and on 5 August 1717 he accepted the Kapellmeister post at Cöthen, receiving an initial payment of fifty thalers just two days later. However, Duke Wilhelm was in turn disappointed with Bach’s behaviour and refused him permission to leave, imprisoning him for nearly four weeks before dismissing him in disgrace on 2 December. Bach and his family then moved immediately to their new house in Cöthen and after hasty rehearsals provided music for the prince’s twenty-third birthday on 10 December. Cöthen must have seemed like a breath of fresh air, and it certainly provided a wonderfully happy and fertile environment for Bach’s creative process.

In 1719 Bach was negotiating for a new two-manual harpsichord from Michael Mietke in Berlin (which may well have been used as the solo instrument in Brandenburg 5) and in 1720 he accompanied the prince with several musicians to Carlsbad. Sadly, on his return he found that his wife had died and was already buried. Bach was clearly unsettled by this and showed some interest in the possibility of moving to Hamburg as organist. He remarried in 1721, but it was the marriage of Prince Leopold a few months later which really provoked him to look for a new job; the new princess was not interested in music and she destroyed the happy relationship between Bach and her husband. Although she died on 4 April 1723 it was too late to affect Bach’s decision to leave and on 16 May he took up his new duties in Leipzig as Kantor at the Thomaskirche and as Civic Director of Music.

It was during that troubled year, between the death of his first wife and his marriage to Anna Magdalena, that Bach decided to make a fair score of six of his various concertos, prefaced by an elegant dedication in French (dated 24 March 1721) which he presented to the Margrave Christian Ludwig of Brandenburg, probably hoping for an offer of employment. He had met the Margrave two years previously in Berlin and promised to send him some music, but since the court orchestra had been disbanded in 1713 there was little chance of these concertos receiving a performance there. Not surprisingly neither a fee nor a job was forthcoming and Bach’s score was left to gather dust in the Margrave’s library. Nevertheless these works represent the most wonderful culmination of the Baroque concerto grosso, displaying a unique diversity of style, form and texture. Whilst the dedication score is a calligraphic delight and presents the concertos in their final instrumental form, much can also be learnt from both earlier and later versions which Bach performed. These have mainly come down to us in copies made in Leipzig by C F Penzel and J G Harrer, as well as several cantata sources.

The Sinfonia in F (BWV1046a), which was probably composed for the ‘Hunt’ Cantata (BWV208) in 1713, forms the basis of the First Concerto, but without its third movement (and consequent violino piccolo) and with changes to the dance movements. (The Sinfonia can be heard on Hyperion CDD22041.) The first movement reappears in 1726 as the Sinfonia to the church cantata ‘Falsche Welt’ (BWV52) and the third movement and second trio were refreshingly rescored with trumpets and voices in the secular cantata ‘Auf, schmetternde Töne der muntern Trompeten’ (BWV207a) from the same year.

The Second and Sixth Concertos have few alternative sources, but the first movement of the Third was reworked in 1729 (with oboes, bassoon and high horns!) as the Sinfonia to the church cantata ‘Ich liebe den Höchsten von ganzem Gemüte’ (BWV174). Bach also rearranged the Fourth Concerto, rescoring the solo violin part for solo harpsichord in F major (BWV1057).

Conversely, the early versions of the Fifth Concerto have a reduced solo role for the harpsichord: in the manuscript parts by Johann Christoph Altnickol there are only nineteen bars of cadenza compared with the sixty-five bars we usually hear today, and the instrumental bass part may well have been intended only for a violone at 8' pitch (i.e. without a cello).

Certainly the scoring and instrumentation of the ‘Brandenburg Concertos’ has been a source of endless debate amongst performers and scholars alike. There is no other collected set of Baroque concertos with such a diversity and juxtaposition of solo instruments, although in the (often later) works of Telemann we find many parallels—concertos using the various combinations of two horns, three oboes, three violins, flute and violin, two violas, and so on. Fasch, Graupner, Heinichen and Stölzel also wrote concertos with contrasting concertante instruments, and even the surprising solo combination of recorder and trumpet was explored by Alessandro Scarlatti in his Sinfonia No 2 in D of 1715.

In the present recording I have naturally made several personal decisions with regard to both text and instrumentation. Despite a current trend to perform Bach’s music with just one player to each part, clearly the Third Concerto already requires six upper string players and three cellos, all of a high technical standard. Given the relative technical simplicity of the ripieno parts in Concertos 1, 2, 4 and 5, and various aspects of the instrumental texture in these works (for example, bar 19 of 5/i always seems very strange with only one tutti violin) we have used a small chorus of ripieno string players.

We have used a 16' bass in all the concertos (although tacet during certain solo sections) following the suggestions of Nikolaus Harnoncourt (The Musical Dialogue; Helm, 1984) although a strong case for an 8' pitch violone in Concertos 2 and 6 and the earlier version of 5 is made by Laurence Dreyfus (Bach’s Continuo Group; Harvard, 1987). I have also added an organ and theorbo to the continuo group in Concertos 1 and 6 (dispensing with the harpsichord altogether in the latter—an idea first suggested by Thurston Dart).

A few other decisions may be of interest. In Concerto 1 the third oboe part lies generally rather low, and in the earlier Sinfonia version actually goes off the bottom of the instrument in the Minuet. This part may be intended for an oboe da caccia, a practice we have adopted here, also making possible the variety of a Minuet reprise without strings; we also prefer the text of the early version of the first woodwind trio.

In Concerto 3 we do not see anything sacred about the central Phrygian cadence and I am sure that Bach would have happily played something at this point. Fortunately he has left us with an ideal contemporary movement—the Largo from his Violin Sonata in G (BWV1021)—which concludes with an identical cadence, at which post the tutti players can rejoin.

Lastly: the vexed question concerning the two ‘Flauti d’echo’ which Bach clearly prescribes at the head of Concerto 4. There is no specific instrument of this name, although the sopranino recorder has been suggested by Thurston Dart. A convincing argument is made by Harnoncourt that Bach was referring to the distinctive echo role of the recorders in the Andante, and actually intended them to play in the distance. This is a practice which we always adopt in concerts, much to the amusement of the audience as the players hastily return just in time for their entry at bar 23 in the Presto!