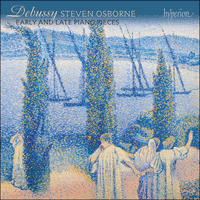 A programme which bridges Debussy’s first work for piano (the Danse bohémienne, from 1880) and his last (Les soirs illuminés par l’ardeur du charbon, from 1917). Steven Osborne is equally responsive to the very different musical moods of both.

Debussy was not one of those composers whose published works go back to their time in short trousers, and if there was at some point a coup de foudre that inspired him to compose, we never hear of it. His first known piece, a song on words by Alfred de Musset, dates from the end of 1879 when he was seventeen, and his first known piano piece, Danse bohémienne, from a year later. He was in Florence at the time, acting as house pianist for Tchaikovsky’s patroness Nadezhda von Meck. Given this connection, he not unnaturally thought he might benefit from it, and she duly sent the above piece off to the great man. We must hope he wasn’t too deeply dismayed by the response: ‘Nice, but too short, with themes that don’t go anywhere, and the form is bungled and not unified.’ Perhaps he welcomed the implicit advice. At any rate, it wasn’t published until 1932, fourteen years after his death.

It seems that throughout the 1880s his interest lay elsewhere, largely in vocal music. Then, around 1890, he returned to the piano with some gusto. After the Mazurka was finally published in 1903, he grumbled that this was a mistake: ‘I really have no taste for this kind of piece, especially now’—meaning he was the composer who had just astonished the world with Pelléas et Mélisande (which of course explains the publisher’s interest). Nevertheless, the work has a certain naive charm, and the long pedals that are later finally disrupted were to remain a feature of his music. The two Arabesques were pieces he never disowned, and with reason. The first one was to gain a fan in Pierre Boulez, who admired the natural way in which one idea leads to another. Their title emphasizes Debussy’s manner of combining lines with their decoration so that the duality is no longer audible, and one can hear occasional touches of his favourite composers: Chopin, Schumann and Grieg. (He was later to comment on Grieg’s pieces as bonbons filled with snow, but it was a sarcasm touched with affection.)

Rêverie was despatched by the composer in the same letter as the Mazurka, and even more abruptly: ‘In two words, it’s bad.’ This now seems unduly harsh, and the publisher Fromont ignored Debussy’s grumble and published it anyway. The composer’s great biographer Edward Lockspeiser categorized Debussy’s composing milieu as essentially a dreamworld, and the opening bars of Rêverie, marked ‘très doux et expressif’, immediately challenge reality by starting with an inversion of a chord foreign to the piece’s true tonality, while quavers, unchanging for forty-eight bars, prolong the dream. Also published in 1903 were the Valse romantique and Ballade slave, the latter now lacking its geographical adjective. The first of these is rather in the manner of a Chopin mazurka, while the spirit of Fauré can be heard in the long downward scales in the left hand—what Fauré called his ‘ladders’. A subsidiary idea of triplets in the major is carefully woven into the discourse, providing the unification Tchaikovsky had earlier found wanting. There is nothing noticeably ‘slave’ about the Ballade, which if anything is even more tightly organized. The repeated phrases that were to be a hallmark of Debussy’s writing (prompting one unkind critic to refer to his ‘style bègue’ or ‘stuttering style’) always contain just enough variation to take us on to the next idea. The final page is a harmonic gem: the tonic F major has become a distant E major, but the arrival of an E sharp bell tolling twenty times in the left hand promises change—of course to an F natural and home.

Why the Suite bergamasque, already at proof stage in 1890, was not published until 1905 is unclear. There were, however, changes to the titles of the last two movements, the famous ‘Clair de lune’ (static) taking the place of ‘Promenade sentimentale’ (in motion), and ‘Pavane’ becoming ‘Passepied’. In the ‘Menuet’, Debussy’s handling of modes that are constantly changing is a miracle of legerdemain and undermines the traditional character of the dance as aristocratic and sedate. Another surprise is the marking ‘tempo rubato’ over the ‘Prélude’—the pianist Marguerite Long remembered the composer crossly remarking that ‘four semiquavers are four semiquavers’; here the rubato is probably intended to draw further attention to the grandiose opening, so different from the usual Debussy as to suggest a knowing wink or two. The last piece of his from 1890, or thereabouts, originally bore another exotic title: Tarantelle styrienne, watered down in the 1903 reprint to ‘Danse’. Catherine Kautsky points out that ‘“Tarentisme”, or the involuntary and obsessive dancing of the tarentella, was another of the hysteria diagnoses most in vogue in the late 1800s’. She also describes the music as ‘one of those exceptional Debussy pieces that gallops to a fortissimo, bravura ending, making no apologies for its blazing and unnuanced convictions’. In 1922 Ravel orchestrated it, no doubt attracted also by the hemiola rhythms (six quavers variously grouped as 3 x 2 and 2 x 3), which he turned to again in the first song of his Don Quichotte à Dulcinée.

With the Nocturne, sold to a publisher for a mere 100 francs in 1892, Debussy’s music perceptibly deepens in its impact, and we are reminded that he had already begun work on Prélude à l’après-midi d’un faune in 1891 and would do so on Pelléas in 1893. The key of D flat major seems to assist the romantic atmosphere—Chopin’s ‘Raindrop’ prelude and Berceuse, Saint-Saëns’s aria ‘Mon cœur s’ouvre à ta voix’ and Fauré’s sixth nocturne (though this was still to be written) all bear the same tonality. Two of Debussy’s favourite composers also have roles to play: in bars 10 and 11 consecutive ninth chords from Chabrier combine with a tritone shift between D flat major and G major from Musorgsky, both of whom he admitted loving around this time.

Late in 1894, with the premiere of L’après-midi pending, Debussy wrote the delightful Images (the adjective ‘oubliées’ was added on their publication in 1978 to distinguish them from the six later pieces of the same title). They are, together with the suite Children’s Corner inspired by his daughter Chouchou, his only piano pieces born of affection rather than of artistic or charitable impulse, or of financial need. Their ‘onlie begetter’ was the seventeen-year-old Yvonne, one of the two daughters of the painter Henri Lerolle who had both been painted at the piano by Renoir two years earlier. Debussy’s dedication deserves citing in full:

May these Images be received by Mlle Yvonne Lerolle with a little of the joy I have in dedicating them to her. These pieces would feel extremely nervous entering ‘the brilliantly lit salons’ generally patronized by people who don’t like music. They are rather ‘conversations’ between the Piano and Oneself. Furthermore it’s not forbidden to treat them with one’s small sensibility on nice rainy days.

After the opening piece, ‘mélancolique et doux’, the ‘Sarabande’ is marked ‘rather on the lines of an old portrait, memory of the Louvre’, and would reappear in a revised version in the suite Pour le piano. The last movement is headed ‘Some aspects of “Nous n’irons plus au bois” because the weather is unbearable’ and is based on the popular song that Debussy used on three other occasions. The tolling noises at the end belong to ‘a bell that doesn’t know when to stop’, and a note over the final bars reads: ‘That’s enough chimes!’

The other piano piece from 1904 is the curiously named Morceau de concours, which never featured in any exam, but was published by the review Musica in January 1905 alongside pieces by other composers including Massenet, Saint-Saëns and Chaminade, with readers asked to guess their identities. Debussy’s tiny contribution, made from phrases of his unfinished opera on Edgar Allan Poe’s tale The Devil in the Belfry, consists of eighteen bars of whole-tone harmony followed, with a logic hard to detect, by nine bars of A flat major. It may well have been heard—along with Florent Schmitt’s less insistently whole-tone ‘Le chant de l’Anio’ from his Nuits romaines—in 1905 by Fauré and Marguerite Long, who remembered him ‘being furious at the success of this so-called novelty’, and saying to her, ‘Me too, I can write a piece in whole tones’, which would be his fifth impromptu.

Saint-Saëns in his turn responded huffily to a request in 1909 from the editor of the magazine SIM (‘Société internationale de musique’) to write a short Hommage à Haydn in celebration of the composer’s centenary year, based on a transcription of his name as the notes BADDG: ‘It would be annoying’, he wrote to Fauré, ‘to get involved in a ridiculous enterprise that would make us the laughing stock of musical Germany.’ Ravel, Dukas, d’Indy, Widor, Hahn and Debussy had no such qualms, the last writing a waltz to partner the minuets by d’Indy and Ravel. Also in 1909 he wrote the cake-walk The little nigar for Théodore Lack’s Méthode élémentaire de piano, a less complex spin-off from the Golliwogg’s one in Children’s Corner. Though we may now think of cake-walks as parodies of black dancing, they began as black parodies of white. ‘Us slaves’, said one, ‘watched white folks’ parties where the guests danced the minuet and then paraded in a grand march … Then we do it too, but we used to mock ’em, every step.’ Debussy’s opening tune, almost pentatonic, echoes folk songs from around the world, further enlivened by a little syncopation.

The last three items on this recording were all written during World War I, the first two for charitable purposes. Page d’album, for a 1915 fundraising auction organized by ‘Le Vêtement du blessé’ (‘The dressing of the wounded’), is almost a study in thirds, the syntax drifting without clear intentions—perhaps mirroring the incapacities of the wounded? Élégie, published the same year in a livre d’or dedicated to Queen Alexandra and honouring the role of women in wartime, belongs to the same ‘lost’ family, categorized by the marking ‘lent, douloureux … mezza voce, cantabile espress.’, in which tiny bursts of crescendo evoke pain, and the final dissonance a refusal of closure. Debussy’s last piano piece, Les soirs illuminés par l’ardeur du charbon (‘On evenings lit with the glow of coals’), which came to light only in November 2001, was a present to his coal merchant Monsieur Tronquin who, in the bitter winter of 1916/17, came up with a desperately needed supply. ‘My thanks already for responding so quickly—and so much to the point …’, Debussy wrote. ‘My little daughter jumped for joy when she read your letter—these days little girls prefer sacks of coal to dolls!’ The title is a line in Baudelaire’s poem Le balcon which Debussy had set in his Cinq poèmes de Baudelaire, and another of those five furnishes the appropriate line ‘Les sons et les parfums tournent dans l’air du soir’ (‘Sounds and scents turn in the evening air’), itself the title of the fourth in his first book of Préludes, from which he quotes very briefly in Les soirs. It’s doubtful whether M. Tronquin would have been aware of this plethora of intertextuality. Debussy, depressed by the war and dying of cancer, was taking his pleasure where he could find it.