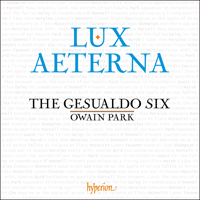 ‘A sequence for the souls of the departed, to be heard by those who remember them’ is how Owain Park characterizes this latest release from The Gesualdo Six. As always with this remarkable group, performances are equally outstanding whether of Tallis or Tavener.

Grief touches all of us at some point during our lives, affecting each person in different ways. The music on this album is intended to illustrate some of the possible emotions therein, exploring musical responses to mourning and loss. In broad terms we focus on three perspectives: uncertainty, acknowledgement and hope.

Tallis and Byrd beautifully capture a sense of powerlessness in their works, asking for forgiveness and protection. The pieces by Tavener and Morales present a series of questions, seeking reassurance for those whose lives are at an end. Settings by Eleanor Daley and Joanna Marsh call on us to enjoy all that life has to offer, with a reminder not to let grief overwhelm us.

When putting this album together, we particularly wanted to explore shades of positivity: there is hope to be found in knowing that the good someone has brought into the world will live on after they have passed. If you like, this is a sequence for the souls of the departed, to be heard by those who remember them.

Written for use at the ancient service of Compline, Neil Cox’s anthem Keep me as the apple of an eye divides the vocal forces in two (higher and lower voices), with the groups responding to each other as the tonal centre delicately shifts upwards. A particularly evocative moment in the text, ‘hide me under the shadow of thy wings’, is set for solo voice, bringing this line into focus. The composer later added the section ‘Lord, grant us thy light’ to the original version, reinforcing the hope found elsewhere in the text.

Singing Thomas Tallis’s In ieiunio et fletu at the original (low) pitch pushes vocal extremities almost to their limit, enabling us to depict the anguish of this Lenten text more vividly. Listen to how Tallis uses vocal range and texture to his advantage, building from low-set homophony at ‘Inter vestibulum et altare’ (‘Between the porch and the altar’) to a top tenor B flat at ‘Parce populo tuo’. This cry to ‘Spare your people’ unfurls into an extended passage as the words are despairingly repeated.

For a number of years Donna McKevitt’s main compositional focus has been on music for film and contemporary dance. It was wonderful to collaborate with the composer to create Lumen, a setting of the Nunc dimittis. Responding to the text, McKevitt has selected certain words to be cycled through the vocal parts, giving the work a hypnotic quality. When the voices eventually break out into duets, the new line of text is highlighted by this textural contrast. Lingering dissonances, caused by overlapping voice parts, lend the piece a poignant, haunting feeling.

In his work Funeral Ikos, a setting of words from the Orthodox service for the burial of priests, John Tavener forms two consorts which communicate the text quite directly in a manner not dissimilar to plainchant. This offers us as performers a chance to mould the text together as if collectively reading a poem. The work is full of questions, asked by the souls as they present themselves before God, unable to alter their lives any further. The repetitive, melodically closed nature of the musical writing reflects this; when harmony breaks out it provides a warm respite, but this is only temporary—there is an inevitability in the austere relaxation to open fifths at each ‘Alleluia’.

In his 2005 work And there was war in heaven Howard Skempton uses a few neat sleight-of-hand tricks to build and hold tension, often bearing a resemblance to Arvo Pärt’s rocking tintinnabuli technique. The text is shared syllabically between the voices in metronomic patterns, sometimes presenting a puzzle to the listener to decipher the syntax. Each bar consists of five beats, constituting an unsettled metre which contrasts with the harmonic stasis maintained by shifting melodic drones. The drama in the text, particularly the image of Michael fighting the dragon, takes centre stage when these hypnotic patterns are brusquely halted.

In Parce mihi, Domine, by the Spanish composer Cristóbal de Morales, the music is bound together by a continuous thread: almost without exception each chord contains one note from the previous, knitting together the chordal texture. The questioning nature of the text is portrayed in music that gives a sense of slowly blinking, with repeated chords coming in and out of focus between silences. The repetition of harmonic patterns at the start of each section relaxes the ear, readying us for the next moment of change and allowing the later cadential passages the space to feel radiant in their difference.

Setting a Respond from the Office of the Dead, William Byrd contributed Peccantem me quotidie to the 1575 Cantiones sacrae (the same co-authored publication which includes In ieiunio et fletu). Byrd denotes each new section by paring down the voices to a trio texture, which he gradually develops into full five-voice polyphony. Dissonances punctuate the writing, with melismatic lines illuminating key moments in the text, including ‘conturbat me’ and ‘redemptio’.

Thou knowest, Lord, the secrets of our hearts by Henry Purcell is one of the most famous works in the choral canon, and may have been composed to complete Thomas Morley’s 1695 Funeral sentences for Queen Mary. Like Morales, Purcell harnesses the power of repeated chords, setting words from the Book of Common Prayer in an ancient, chordal style which gives the work a timeless quality.

In 2014 I was asked by the vocal consort Opus Anglicanum to compose a piece to help them mark the centenary of World War I. Their commemoration was centred around Welsh poet David Jones’s In Parenthesis, based on the artist’s experience as a young volunteer soldier in the Royal Welch Fusiliers. Words from his long narrative poem are quoted as a stream of consciousness, not always connected to the sung parts but sometimes intertwined in a dream-like sequence, blurred together. In the vocal lines a repeated, monotonous ‘Men marching’ idea provides a thread between songs derived from village halls, community song books, churches and even those that had drifted over from the trenches. In 2018 we visited Mametz Wood, a site connected to the Battle of the Somme, to film a video of this piece to commemorate the 100th anniversary of the Armistice which marked the end of the First World War. It is a quiet place, with lonely corners punctuated by dappled light—haunting in its stillness and the memory of what has gone before.

Laurence Binyon’s poem For the fallen is recited and sung across the UK on Remembrance Sunday, often outside as the poppies pinned to people’s clothing blow gently in the wind. Douglas Guest sets the words syllabically, as if being spoken together. The music is set mostly in four parts, with the odd note added to highlight certain moments in the text, such as ‘years’ and ‘morning’.

Eleanor Daley emphasizes the positivity contained in a poem attributed to Mary Elizabeth Frye by setting In remembrance in a triple metre, which lends the work a slow dance-like feel. The composer uses the lower voices to create a calming sonority, in which each vocal line is melodically driven. When the text is set syllabically the work exudes confidence and strength, as at ‘I am the sunlight’; by contrast, moments of melismatic writing bring tenderness, such as when the birds dance in ‘circled flight’.

Composed as an Introit, James O’Donnell’s Present yourselves has a welcoming quality, inviting the listener to engage with the opening theme by way of textual repetition. The middle section climbs through the gears, twisting upwards harmonically to culminate at ‘hope’. At the end, as if recalling a memory, the introductory music returns as a thoughtful and prayerful conclusion.

I take thee was composed by Joanna Marsh for The Gesualdo Six in 2020 as a commissioned gift from Stephen Bence to his wife of ten years, Ayesha Vardag. The text by Imtiaz Dharker celebrates significant moments in our lives, focusing on commitment and happiness. The work is in Marsh’s typically inventive harmonic style, opening out into rich added-note chords before subsiding to unisons. This tension and release almost feels like breathing. A beautiful passage in the text, ‘taking our tea with buttered / hope’, is wonderfully set here, full of joy and laughter.

The work which gives this album its title, Communio ‘Lux aeterna’, comes from a five-voice Missa pro defunctis (or Requiem) by Cristóbal de Morales. This is a text sung within the liturgy to commemorate those who are no longer with us, and which asks God to grant them eternal rest. The plainchant incipit that begins the Mass movement provides a framework for the polyphony that follows: short, achingly beautiful melodies which combine to create a mellifluous sonic whole.

The final piece here, A Good-Night, brings together many of the themes explored so far, offering a final secure resting place: sleep. Richard Rodney Bennett sets prose by the seventeenth-century writer Francis Quarles with remarkable warmth, allowing the words to shine by using simple melodic and harmonic gestures. There is a sense of closure as the music returns to the opening material, newly comforting in its familiarity.