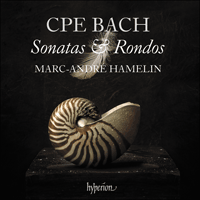 The music of C P E Bach makes complex stylistic demands of the performer like little else of its time, the extraordinary drama and intensity tempered by Enlightenment elegance and the influence of the Baroque. Marc-André Hamelin’s performances set new standards in this endlessly absorbing repertoire.

It is often said amongst musicians that the truly great teachers are not so much those whose students all sound like them but rather those whose teaching has inspired as many individual styles as there are pupils. Johann Sebastian Bach is no exception here, and even those of his disciples who as composers descended now and then into a pastiche of their master’s style nonetheless each displayed a distinctive personality in the best of their works. Bach’s sons faced what would seem to us a special paradox as the direct heirs of a towering artistic figure. Whether through their own volition or by design of the elder Bach’s pedagogical approach, each of the four Bach sons who became composers took aesthetic pathways as adventurous as that followed by their father.

Of the four, the youngest and middle sons—Johann Christian (1735-1782) and Carl Philipp Emanuel (1714-1788)—went the farthest in this respect. Christian took the path of northern Italian Classicism and became a man of the theatre; Emanuel went into court and then municipal service in Berlin and Hamburg, and positioned himself and his art at the happy junction of philosophers, visual artists and literati exemplifying the achievements of the German Enlightenment. The influence of these two sons on developing trends in Classical and Romantic music cannot be overstated; in Emanuel’s case, the impact extended itself to techniques of keyboard-playing. Along with his hundreds of compositions for the keyboard instruments of the time (including six sonatas for organ—without pedals, however), C P E Bach’s outstanding achievement was his Essay on the True Art of Playing Keyboard Instruments (1753), a compendium of practically all the technical precepts of the music of his time and a detailed guide to the art of the keyboardist as a soloist, accompanist and improviser. Haydn called it the ‘school of schools’, and no less than Beethoven himself used the treatise and Emanuel Bach’s music in the training of his most able pupils.

Like that of his father, C P E Bach’s posthumous reputation over the course of the nineteenth and twentieth centuries as a teacher gradually took primacy over his actual music. This is indeed a funny state of affairs if one considers just how much he wrote and published for the keyboard: some 400 solo sonatas, fantasias, fugues, character pieces, variations etc., and almost eighty (!) concertos, in addition to numerous chamber works and lieder with concertato keyboard parts. The rehabilitation of his legacy as one of the masters who brought keyboard music to its highest state has been effected in the past several decades by performers on period and modern instruments alike.

The two sonatas here from volume III of C P E Bach’s sonatas and rondos ‘for connoisseurs and music-lovers’ (Wq57/2 & Wq57/6, published in 1781) can be said to definitively represent the composer’s complete personal transition from the harpsichord to the thinner and more immediately malleable textures of the eighteenth-century piano. While the pianos known to Emanuel Bach lacked the monumental angularity of the harpsichord, they excelled in a remarkable range of colours inherent in the infinite graduations of accent made possible by the tiny leather-covered hammers hitting pairs of strings for each note. Not having to accommodate the player’s switching between manuals and resorting to time as the main expressive device, the composer could now introduce sudden changes of character in a fraction of a moment or even, as is heard in the final allegro di molto of the A minor sonata (Wq57/2), within the course of one phrase.

This primary advantage of the early piano enabled the performer to deliver an interpretation essentially more integrated within itself—that is to say, within a single colouristic voice that could be manipulated at will by skilful and sensitive hands according to the momentum and intended narrative of the music. This gave rise to a sensitive ‘soloist as orator’ in a way that eschewed the somewhat more didactic tones of the harpsichord toccatas of J S Bach and other earlier composers. In the E major rondo (Wq57/1), this quality of pastels juxtaposes perfectly with the sudden key changes and modulations slyly introduced in the various returns of the theme and alternating couplets. Likewise, the ability to change the colours of single notes offers a level of artistic leeway wherein the performer can play recurring thematic material in different ways and thus play upon various layers of memory and expectation built into rondo form.

In volume VI of the same collection (1785/6) the hallmarks of a fully fledged pianistic style are even more evident, particularly in the emphatically pointed articulations and closely voiced chords of the C major fantasia (Wq61/6). The essentially vocal manner of the harpsichord has given way to a purely instrumental style of writing and to the evocation of an orchestral aural experience without necessarily referring to orchestral textures as such.

The sonata in E minor (Wq62/12) was first published in one of the volumes of the ‘Musical All-Sorts’ (Musikalisches Allerley) by the Berlin printer F W Birnstiel in the early 1760s. Birnstiel’s collection was aimed at the eclectic tastes of the growing urban middle class, and indeed the character of the sonata—in reality a suite in a more archaic style than the date of composition, some ten years before, would seem to suggest—reflects the lighter nature of this essentially domestic music-making. The general musical language of this suite lies somewhere between that of J S Bach (the opening allemande no doubt having a more than coincidental resemblance to the opening of the older Bach’s first ‘French’ suite in D minor, BWV812) and that of Handel, whose influence is apparent in the more singable plasticity of the melodic material (particularly in the closing gigue). The hallmarks of what we generally associate with the empfindsamer Stil—the sighing or falling intervals and appoggiaturas, the unpredictable harmonic and melodic style—bind the diverse inspiration for Emanuel Bach’s suite into a single aesthetic utterance.

The four works concluding the first part of this recital represent the expressive world of the clavichord, Emanuel Bach’s favourite instrument and the one on which he excelled most as a performer. The ‘Farewell to my Clavier built by Silbermann’ abounds in clavichord-specific devices, not least of which is the Bebung, a type of vibrato produced by applying varying pressure on the key as the metal tangent remains in contact with the string. Doubtless this ornament, not meant to be applied continuously throughout the performance of a work at the clavichord, was used in the eighteenth century even when not notated, but as with most aspects of the Galant mindset, more is more—thus, C P E Bach hones in on this specific device as a kind of highly mannered symbol for this elegy to an instrument from which he shall soon part. The little G major march (BWVAnh124), attributed in the nineteenth century to his father, is one of the younger Bach’s earliest surviving works and endures by having been written into the famous notebook for his stepmother Anna Magdalena. Even the purposeful naivety of this short work cannot mask a totally independent artistic character. What the father made of this strong distinction from his own style is anyone’s guess, but there is no evidence that he suppressed it. As can be heard in the 9 variations on an arioso in C major (Wq118/10), even when parting from his father’s style Emanuel Bach was a craftsman of the very highest order. The intricacies of the score and equal technical demands made on both hands attest to the exhaustive lens applied to musical material that was cultivated in the Bach circle. One has only to experience the relative poverty of invention and technique in the keyboard works of his contemporaries (save those of Georg Anton Benda) to appreciate the impact of this powerful dialectic of old and new sensibilities in C P E Bach’s works.

Alongside the pianistic works in the second part of this programme—the C minor rondo (Wq59/4), the F minor sonata (Wq57/6) and the remarkably orchestral fantasy in F sharp minor (Wq67)—Mr Hamelin has recorded four of C P E Bach’s forays into a genre usually associated with the clavicinistes of the High Baroque—namely, the character piece. As the name suggests, this type of piece, frequently a homage to a patron or friend, has strong associations with the stock characterizations of early modern theatre and the seventeenth-century fashion of literary tributes amongst intellectual equals. Structurally speaking, the mid-eighteenth-century German context dissociates this genre from specific dance or metrical structures. This allowed for either a strong focus on the rhetorical content of a piece or the use of a relative paucity of melodic material to suggest a mere, even light-hearted impression of a figure.

L’Aly Rupalich (Wq117/27) is a somewhat one-dimensional example of this kind of impressionistic portrait—originally titled ‘La Bach’, it is of uncertain reference. The B flat major La complaisante, on the other hand, distils a momentary glimpse of human behaviour within a short rondo in a disarming pastoral vein. As Joshua Walden has remarked in a fascinating article on the topic:

Instrumental music became a plausible medium for characteristic portraiture because, in eighteenth-century Germany, it was commonly considered that music, of all the arts, could best depict the abstract elements of the sitter’s presence—the passions and affects—that constitute his character. [C P E] Bach and Couperin employed musical gestures to evoke a variety of human passions … [musical signs] read as mimetic of generic human characteristics; and by providing the name of a particular sitter, the composer ascribes the combination of passions—and the resultant sense of overall character—to that person.

One might say that the character pieces, though they occupied a relatively small part of the composer’s overall activity, represent in compact form the qualities of Emanuel Bach’s keyboard music that made him so attractive to his contemporaries and a model of emulation for younger composers and performers.

The transference to the keyboard of orchestral and vocal models, the cultivation of a complex expressive language, high technical competence and a style that clearly appealed to cognoscenti and amateur alike won C P E Bach an enviable position in the pantheon of composers who left posterity a body of work meaningful in its capacity to inspire re-invention and re-discovery in subsequent generations. This gift of making the keyboard ‘speak’ was prized by his contemporaries, not least of all the poet F G Klopstock, who eulogized the middle Bach son just so: ‘Was great in text-led strains, but greater yet in bold, wordless music; surpassed the inventor of keyed instruments; for he raised the art of performance through teaching and practice to its perfection.’