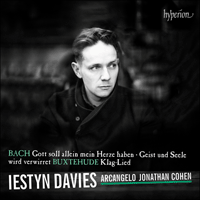 Both of these cantatas may have been written for an outstandingly gifted boy alto in Bach’s Leipzig, but—listening to these peerless accounts—it’s impossible to believe he could have approached Iestyn Davies’s flawless technique and profound interpretative insight.

From his early brushes with authority in Arnstadt to his conflicts with the Leipzig city council, Johann Sebastian Bach was never one to compromise. As a young organist in Mühlhausen, frustrated by theological disputes and a chronic shortage of funds, he informed the town authorities that his artistic goal was to conduct ‘a well-regulated church music to the honour of God’. Only with his appointment as Thomaskantor in Leipzig in 1723 was Bach finally able to realize his aspiration. From the word go he embarked on an unprecedentedly ambitious programme of music for the Lutheran liturgy. Working with a zeal stupendous even by his standards, by the end of 1727 he had completed three annual cycles of church cantatas, the Magnificat, and the St John and St Matthew Passions.

The tradition in Leipzig was that the priest’s sermon in the morning Hauptgottesdienst, the Lutheran equivalent of the Catholic Mass, interpreted the Gospel, and the afternoon service the Epistle. Bach’s weekly cantatas (which he termed either ‘concerto’—denoting combined voices and instruments—or, bluntly, ‘Stück’—‘piece’) were musical commentaries on the sermon, performed on alternate Sunday mornings in the two main Leipzig churches, St Thomas’s and St Nicholas’s. The composer himself selected the cantata texts and arranged for them to be printed in booklets that the congregation could read and digest before the performance.

True to form, in his Leipzig cantatas Bach spared neither himself nor his performers. His writing for his all-male choir, soloists (chosen from the elite choral singers, the so-called ‘concertists’) and instrumentalists is vastly more challenging, technically and interpretatively, than in any cantatas by his contemporaries. The composer Johann Adolph Scheibe complained—with some justification—that Bach demanded ‘that singers and instrumentalists perform with their throats and instruments the same feats he can perform on the clavier. But this is impossible.’ Bach himself acknowledged what he called the ‘incomparably difficult and intricate’ style of his sacred music. What is irrefutable is his unflagging inventiveness throughout some 150 surviving Leipzig church cantatas, astonishingly varied in expression and instrumental colour. Time and again his breathtaking, meticulous craftsmanship calls to mind Thomas Carlyle’s famous dictum (apropos Frederick the Great) that genius is the ‘transcendent capacity of taking trouble, first of all’.

We can guess that it was the presence of an outstandingly gifted boy alto—probably between fourteen and sixteen years old—among Bach’s choral scholars that inspired three superb solo cantatas in the summer and autumn of 1726: Nos 170 (the famous Vergnügte Ruh’, beliebte Seelenlust), 35 and 169. In all three Bach complements the alto voice with an elaborate organ obbligato, reminding the Leipzig faithful of his prowess as the greatest German organ virtuoso of the age. Using a libretto by the Darmstadt court poet Georg Christian Lehms, cantata No 35, Geist und Seele wird verwirret, was first performed on 8 September 1726, the twelfth Sunday after Trinity. The Gospel reading for the day, Mark 7: 31-37, recounts Christ’s healing of the deaf mute: cue for a predominantly uplifting work amid so much doctrinal gloom in the Trinity season.

Scored for two oboes, taille—another term for the oboe da caccia, or tenor oboe—organ and strings, No 35 opens with a D minor sinfonia that combines a Vivaldian snap and swagger (Bach greatly admired the Italian) with Bachian contrapuntal sinew. Working against the clock, Bach often recycled earlier music for his Leipzig cantatas. And like the rollicking moto perpetuo sinfonia that launches the second part of the cantata, this opening sinfonia probably draws upon a lost concerto for violin, oboe or harpsichord from Bach’s years in Weimar or Köthen.

The da capo (ABA) first aria, which evokes the soul’s confused astonishment at God’s miracles, may also be a re-working of a lost concerto movement. Contradicting the orchestra’s gentle siciliano lilt, Bach here pits the singer’s angular, broken lines against the organ’s delicate filigree. The key word ‘verwirret’ (‘confused’)—prompts tortuous chromatic melismas that must have challenged Bach’s alto in 1726, while in the B section leaping flourishes on ‘Jauchzen’ depict the believer’s joy in divine miracles.

After a recitative, the second aria turns from D minor to a bright F major for a celebration of God’s love. Strings and woodwind are silent in this animated duet for voice and organ, with rippling coloratura on ‘alle’ (‘every’) and ‘reichen’ (‘rich’). This movement may also be parodied from an earlier work. Bach scholars, including John Eliot Gardiner, have demonstrated that the organ-writing is characteristic of the violoncello piccolo (a smaller cello with a fifth string) both in its range and its cross-string figuration.

Following the second sinfonia, played during Communion, Part II of the cantata consists merely of a brief recitative (‘Hephata’—‘be opened’—is the Aramaic word uttered by Christ to the deaf mute) and a final aria, in C major. Lehms’s text here virtually quotes the last verse of the Gospel reading. The believer sings in jaunty minuet rhythm of his longing to be united with God, with frolicking triplets for voice and organ to paint ‘fröhliches’ (‘joyous’) and characteristic stabs of chromatic pain in response to ‘Schmerzensjoch’ (‘sorrow-laden yoke’) and ‘martervolles Leben’ (‘life so full of torment’).

Sung on the eighteenth Sunday after Trinity, which in 1726 fell on 20 October, cantata No 169, Gott soll allein mein Herze haben, follows No 35 in adapting earlier concerto movements for organ obbligato. The source here is a lost concerto, probably for oboe, which Bach later transcribed as the E major keyboard concerto, BWV1053. He reworked the concerto’s first movement as the cantata’s exuberant sinfonia, adding parts for two oboes and taille, and used the siciliano slow movement as the basis of the aria ‘Stirb in mir’.

Bach himself may have had a hand in the cantata’s libretto, which develops the themes of loving God and one’s neighbour from the Gospel readings for the day—1 Corinthians 1: 4-8, in which St Paul gives thanks for the virtue of the Corinthians, and Matthew 22: 34-36, where Christ answers the Pharisees’ taunting question, ‘Master, which is the great commandment in the law?’ After the sinfonia-cum-organ-concerto, a brief arioso in minuet rhythm presents the cantata’s ‘motto’, ‘God alone shall have my heart’. This then alternates with recitative to create the effect of a dialogue, with characteristic touches of word-painting like the continuo’s little flourish of semiquavers to evoke the gushing brook.

The first aria takes up and elaborates the motto far more confidently, its sturdy vocal line adorned by a florid organ obbligato: another movement that fuses the sacred with the secular. In the following recitative Bach the word-painter contrasts the falling chromatic line of ‘Sie schließt die Hölle zu’ (‘It shuts hell’s gate’) with the triumphant ascent of Elijah’s chariot.

Bach evidently felt that the bittersweet siciliano from the (lost) concerto, with its richly textured string accompaniment, was particularly apt for the second aria, on the familiar Pietist theme of withdrawal from the world. Note especially the contorted setting of ‘verworf’nen Fleischestriebe’ (‘depraved carnal impulses’—Lutheran moralizing in full cry!), and the wearily sinking chromaticism to intensify the singer’s final ‘Stirb in mir’ (‘Die in me’). After a brief recitative, the cantata ends with a plain four-part harmonization of a pre-Reformation chorale melody.

Separating the two cantatas in this programme are shorter works by the two greatest composers of German sacred music in the generations before Bach. Scholars have long contested whether Dieterich Buxtehude was German or Danish. It is not even certain exactly where he was born, though the modern consensus favours Helsingborg, now in Sweden. Buxtehude became organist at the Marienkirche in Lübeck in 1668 and remained there until his death. His often virtuosic organ music was a prime influence on the young Bach, who visited the aged Buxtehude for three months in 1705/6—though the story that Bach made the 450-kilometre journey from Arnstadt to Lübeck on foot may just have grown in the telling.

Scored for voice, two viols (played here on violas da gamba) and continuo, Buxtehude’s Klag-Lied, or ‘Elegy’, forms a postlude to the cantata Fried- und Freudenreiche Hinfarth, performed at his father’s funeral in January 1674. The words of the seven verses, each to the same music, are probably by the composer himself. The song’s doleful eloquence is enhanced by rhythmic clashes created by the unpredictable syncopations in both the vocal and instrumental parts.

Half a century earlier, amid the ravages of the Thirty Years’ War, Heinrich Schütz worked as Kapellmeister at the royal court in Dresden. Published in the collection Psalmen Davids in 1628, Erbarm dich mein, o Herre Gott is a setting of a penitential sixteenth-century chorale melody preceded by an instrumental sinfonia, darkly scored for pairs of violins and violas, plus violone and continuo. In Dresden, the vocal line probably would have been taken by an adult falsettist. Rich, dissonant string textures underpin the alto’s increasingly anxious repeated cries of ‘Erbarm dich’ (‘Have mercy’). Schütz then relaxes the tension at the mention of God’s mercy (‘Nach deiner großen Barmherzigkeit’) before dwelling painfully on human wrongdoing (‘Missetat’) and sinfulness.