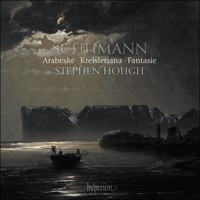 This album is now available for pre-ordering.
Please note: Orders including albums bought in advance of the UK release date, shown below, will be shipped by first class mail on the day preceding this date. Your card will be charged at the time of ordering. If you do not want to delay the delivery of live catalogue items please order them separately from pre-order titles.
Label: Hyperion
Recording details: April 2020
Henry Wood Hall, London, United Kingdom
Produced by Rachel Smith
Engineered by David Hinitt
Release date: 3 September 2021
Total duration: 70 minutes 1 seconds

The emotional sweep of these marvellous works, reflecting the vicissitudes of Schumann’s complex personal life at the time, calls for a pianist wholly responsive to their fervent Romanticism. The artistry of Stephen Hough proves ideal.

Although contemporaries such as Berlioz and Wagner were equally fertile writers, Schumann was the most visionary of the literary composers. Within his imagination, there existed no boundary between words and music. Both shared a semantic flexibility and expressive potential which delighted and stimulated him, never more so than in the early collections of keyboard pieces he composed as a young man in the 1830s. Arising from his lifelong fascination with German literary Romanticism, these pieces attain the condition of poetry and exquisitely, sometimes disturbingly, blur the lines between the different genres of his day. Together with Schumann’s songs (themselves almost miraculous fusions of words and notes), they remain his best-loved repertoire, attracting, eluding and tormenting countless pianists for nearly two centuries.

Schumann’s chief literary inspiration was the writings of Jean Paul Richter (1763-1825) and E T A Hoffmann (1776-1822). Jean Paul still divides readers today, his vast, sprawling novels resisting logic and analysis, like spontaneous improvisations. Hoffmann, who greatly admired Jean Paul, shared some of his stylistic features but on a smaller scale. He was a superbly adventurous writer, a perceptive musical critic and a composer of considerable talent. In both writers’ works, reality and fantasy, the prosaic and the absurd, often overlap. As a result, Schumann’s early piano works belong to a world in which cats pen pompous memoirs, a nutcracker soldier battles an evil mouse king, and dancing dolls come to life—all events drawn from Hoffmann’s anarchic, fantastical writings. The piano works also emulate the structural principles of that Romantic world, cast in aphoristic, multi-sectional forms, resisting orderliness and predictability. They are bound together largely by the performer’s handling of time and texture, and the listener’s willingness to enjoy the ride.

The youthful Schumann also had seminal musical experiences during those years, the first of which was seeing the virtuoso violinist Nicolò Paganini perform in Frankfurt in 1830. This experience inspired in the twenty-year-old a hope of becoming a professional pianist, leading him to abandon his legal studies to take piano lessons from the renowned teacher Friedrich Wieck in Leipzig. However, Schumann’s ambition was soon thwarted, initially by his own haphazard approach to practice, and then lastingly by a hand injury he sustained by using a mechanical restraint. In that era of the composer-virtuoso, he could not be the exponent of his own compositional creations.

In the same years, he discovered the music of Franz Schubert, which was gradually being published in Vienna after the composer’s premature death in 1828; he met Felix Mendelssohn, a consummate musical professional and eventually a dear colleague; his knowledge and admiration of Beethoven’s music deepened; and his energies turned increasingly towards composition. Alongside this, he established a musical journal, the Neue Zeitschrift für Musik, for which he created a society populated with a mixture of living and fantasy musicians. This included alter egos for himself, the exuberant ‘Florestan’ and introvert ‘Eusebius’. Schumann even referred to himself by these names, in the third person, as though they were somehow both within him and yet separate. Writing for this journal exposed him to a huge range of contemporary musical influences, stretching his imagination far beyond provincial Germany.

Finally, Schumann’s personal circumstances also stoked the creative flame which burned so brightly during the 1830s. In one of the most famous romances in music history, Schumann was both besotted with and artistically inspired by the virtuoso pianist Clara Wieck. Her father and teacher Friedrich Wieck (the same teacher with whom Schumann had taken piano lessons in Leipzig) forbade their marriage because he believed that Schumann could not support her and that it would spell the end of her glorious career. His resistance led to an emotionally gruelling court battle with Schumann, which the latter eventually won. Sadly, Wieck’s reservations were partially justified on both fronts, in that Schumann never achieved professional and financial stability, and Clara Schumann’s career saw a long and frustrating interruption before she resumed it with redoubled energies after Robert’s death in 1856. Nevertheless, the effect of these combined circumstances was like a match to kindling. In a letter of 5 September 1839 to a friend, he declared that several works were born of that struggle. The music recorded here emerged rapidly, from a period marked by intense euphoria and despair.

The Arabeske, Op 18, composed in 1839, is cast in a fragmented, multi-sectioned form. It opens questioningly, in a brightly sunny C major, directed by Schumann to be ‘leicht und zart’ (‘light and tender’). Despite its charming melody, clearly imagined for the high singing voice of a woman or child, it is richly textured, with many echoes and counter-melodies composed into the texture. The pianist is guided by nothing more than a single marking of ‘Ped.’ at the start, and the odd articulation and dynamic mark. Although the piece is anchored by the regular return of the opening melody, we are gifted sixteen drifting, exquisite bars at the close of the piece, all dissolving edges and soft, stretchy time.

The genesis of Kreisleriana, Op 16, involved a layering of fiction and autobiography. The title recalls Schumann’s affinity with the character of Johannes Kreisler, a fictional musician who appears in the writings of E T A Hoffmann such as the ‘Kreisleriana’ section of Die Fantasiestücke in Callots Manier and The Life and Opinions of Tomcat Murr (1819-21). In this brilliantly playful novel, a tomcat’s autobiographical musings are interleaved with ‘biographical fragments’, torn-out pages from an ostensibly published biography of Kreisler, upon which the cat has penned his work. The book parodies the coming-of-age novels so popular at the time, Murr’s pompous posturing counterpointed by Kreisler’s white-hot sincerity as he improvises at his piano. The character Johannes Kreisler became the paradigmatic Romantic composer.

Composed in 1838 and dedicated to the composer’s famous contemporary Frédéric Chopin, Kreisleriana is subtitled ‘Fantasien für Pianoforte’—a title which connects them to Schumann’s Fantasiestücke, Op 12, from the previous year, as well as to his pieces for clarinet and piano, Op 73, and for piano trio, Op 88, both also titled Fantasiestücke. Each of the numbers divides into several contrasting sections, recalling the imaginary musician’s wild mood swings as well as Schumann’s own alter egos, Florestan and Eusebius. Each title explores an extreme: as fast as possible, very intimate, very excited, very slow, and so forth, veering across a vast emotional landscape. Schumann doubted their suitability for public performance, justifiably concerned that listeners would fail to comprehend them. Clara Wieck, whom he married in 1840, took up their cause in concert. However, she rarely performed them as a complete sequence, preferring to select a handful of numbers which she rearranged anew into ever-varied sequences of moods, or combined with other pieces.

The Kreisleriana pieces are an emotional rollercoaster, alternating tumultuous and sinister episodes with tender and reflective melodies, all clothed in layered textures. From the very outset, Schumann resists the tyranny of the bar line, the musical score emerging as a tangle of ties and accents. Such writing shows that he understood how to create musical momentum through both rhythmic and harmonic instability; in faster passages, the lines tumble forward, pell-mell, like the legs of a thoroughbred racehorse going at full tilt, dragging the unwary listener with them. In slower passages, time is liberated entirely, allowing the listener to float free, borne forward only by the beauty of the melodic lines.

The complex origin of the Fantasie in C major, Op 17, is linked with two of Schumann’s deepest loves: for Clara Wieck, when he believed he would lose her, and of Beethoven, whom he admired unreservedly and who had died when Schumann was sixteen. The facts remain hazy. In June 1836, Schumann composed a lament for Clara which he titled ‘Ruins’. But that autumn, he decided to incorporate that movement into a ‘Grand Sonata’ for Beethoven in three movements: ‘Ruins’, ‘Trophies’ and ‘Palms’. He hoped—rather unrealistically—that the proceeds of sales of the work could be donated towards the construction of a planned Beethoven monument, for which funds were being collected by Franz Liszt.

The first two publishers he contacted, Kistner and Haslinger, were unconvinced by this plan, so he approached the prestigious firm Breitkopf & Härtel, who accepted it. After it had been engraved, Schumann requested a change of title to ‘Fantasy’; he told Clara Wieck that it was dedicated to Liszt, their colleague and her rival on the concert stage. But he also wrote:

You can understand the fantasy only if you think back to the unhappy summer of 1836, when I renounced you; now I have no reason to compose such unhappy and melancholy music.

She, in turn, responded:

Yesterday I received your wonderful fantasy—today I am still half ill with rapture; as I played through it I was drawn involuntarily towards the window, and there I felt like leaping out to the beautiful spring flowers and embracing them.

The work therefore bears several associations, public and private, professional and personal, historical and autobiographical. Furthermore, Schumann referred to it variously as a ‘sonata’, a ‘fantasy’, ‘fantasy pieces’ and ‘poems’ (‘Dichtungen’), leaving open the question of how he envisioned the work. The order of movements, namely fast-fast-slow, rather than fast-slow-fast, differs from most sonatas, although there is an affinity with the unconventional world of Beethoven’s late works in that genre. They also have unusual titles, rather than the usual anonymous allegros or andantes: ‘To be performed completely with fantasy and passion’; ‘Moderate, but with energy’; and ‘Solemn and slow, to be played quietly throughout’. With the first movement, we embark on a thrilling journey, eventually coming to rest with a tender quotation from Beethoven’s song cycle An die ferne Geliebte (‘To the distant beloved’, surely recalling Clara Wieck). The second movement, a robustly extrovert march which she particularly loved, is followed by a third movement which floats, unmoored, through a dreamscape of linked harmonies, and it remains one of the most intimate and exquisite of piano movements.

For the vast amateur music-buying market of his day, Schumann’s lyric songs were initially more appealing than his piano pieces. However, his wife, alongside Franz Liszt and their numerous pupils, steadfastly championed this elusive, often vertiginously difficult music in public, ensuring its enduring place in listeners’ hearts. Interpretative approaches have continuously evolved, but the evidence of performance practice demands the fluid, flexible approach heard on this recording. Just as one’s pulse speeds or slows as we dream, the musical pulse stretches and compresses to create a whimsical, hallucinatory world in which we gladly wander.