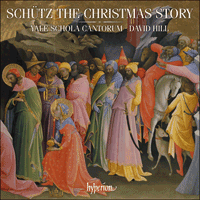 The Christmas story & other works

Schütz’s ‘Christmas story’ is an absolute delight from beginning to end, its charming tableaux of angels, shepherds and wise men completely belying the composer’s old age and constrained circumstances. Here it’s the jubilant climax to a programme of Christmas motets from the 1640s.

‘The Yale Schola Cantorum comprises roughly 30 singers and a dozen instrumentalists, but they sound light and bright nonetheless. They make a fine impression in the opening Hodie Christus natus est, and the choir’s interventions are among the most telling on this CD’ (Gramophone)
‘Schütz’s Italianate oratorio is one of the masterpieces of the early Baroque and is performed beautifully here. Voices and instruments are superbly balanced within the rich recorded texture’ (BBC Music Magazine)

'Hodie' is one of the highlights for the brightness and security of the choral singing … an excellent recording’ (BBC Record Review)
‘Venturing outside the British sound world, the Yale Schola Cantorum, under David Hill, give a refreshingly clean and athletic American account of Schütz’s 17th-century Christmas Story and assorted motets’ (The Times)

Germany’s pre-eminent composer of the seventeenth century Heinrich Schütz occupied a position analogous to that of J S Bach in the eighteenth. Like the Cantor of Leipzig, he spent most of his career in one city—Dresden, the seat of the Saxon electoral court—and composed in a wide array of genres, from madrigals and sacred concertos to quasi-theatrical ‘histories’ and operas. Unlike Bach, however, he didn’t grow up in a supportive musical family: his bourgeois parents discouraged him from pursuing a musical career and instead steered him towards a legal profession.

Schütz’s place in the musical pantheon was saved by the timely intervention of a princely patron, who sent him to Venice to study with Giovanni Gabrieli in 1609. Although Schütz returned to Germany more determined than ever to become a composer, in deference to his parents’ wishes he ‘was about to seek out my books which I had previously laid aside when God Almighty (who no doubt had singled me out in the womb for the profession of music) ordained that in 1614 I be called to serve in Dresden’, to compose music for a royal christening. Three years later, he accepted the position of de facto Kapellmeister to Elector Johann Georg I.

Schütz apparently saw no conflict between his artistic allegiance to Catholic Italy, which he called ‘the true university of music’, and his staunch Protestant faith. Apart from an early collection of madrigals composed in the first flush of his discovery of the extroverted, melodically rich Italian style, virtually all his surviving music was written either for the Lutheran Church or for religious ceremonies such as weddings, funerals and christenings. This recording juxtaposes two large-scale works—a lavishly scored narrative of the birth of Christ and a monumental Magnificat—with an assortment of shorter choral pieces set to a mixture of German and Latin texts.

A joyful celebration of the nativity, Hodie Christus natus est was probably composed for a Christmas Day Vespers service in Dresden during the 1640s. Schütz’s sonorous six-voice choir (two sopranos, alto, two tenors and bass) harks back to Gabrieli’s ten-part setting (1597) of the same text. The pacing and metre of the music are skilfully varied: lively triple-time ‘Alleluia’ refrains alternate with phrases of the familiar liturgical text laid out in four-square rhythms. Schütz is equally attentive to textural variety, as illustrated by the imitative duet for alto and tenor—sung here by two tenors—on ‘Hodie salvator apparuit’ (‘Today the saviour appeared’) and the stately, antiphonal ‘Gloria’ for two three-voice choirs.

Schütz published his second set of Kleine geistliche Konzerte in 1639. Among the thirty-two ‘little sacred concertos’ in the collection is a charming Latin-texted Ave Maria for five voices, five instruments and continuo. The Annunciation story is presented as an intimate conversation between the angel Gabriel and Mary in recitative-like monodic style, known to the forward-looking composers Schütz had met in Italy as stile rappresentativo. Only rarely do the solo voices overlap, as Mary impatiently interrupts the angel’s long-winded speech. Their dialogue is sandwiched between short instrumental ‘symphonias’, and the work ends with a spirited chorus for concerted voices and instruments.

Voices and instruments are also combined to splendid effect in Schütz’s adaptation of a Christmas motet by Andrea Gabrieli entitled Angelus ad pastores (‘The angel to the shepherds’). The intricately wrought seven-voice counterpoint and smoothly flowing imitative textures in Der Engel sprach zu den Hirten demonstrate Schütz’s mastery of the slightly old-fashioned polyphonic idiom associated with Giovanni Gabrieli, Orlande de Lassus, and other late-Renaissance composers. In retrofitting the elder Gabrieli’s music to German words, Schütz hoped to convince his compatriots that the vocal counterpoint they admired in their Italian models could be successfully emulated—a topic that was hotly debated in Germany in the 1640s.

Like Der Engel sprach, Ein Kind ist uns geboren (‘A child is born to us’) first appeared in Schütz’s Geistliche Chor-Music (‘Spiritual choir music’), an anthology of German motets published in 1648, the year the Peace of Westphalia brought an end to the ruinous Thirty Years’ War. In his preface Schütz urged other German composers who had embraced the fashionable ‘Italian style of composition with basso continuo’ not to neglect the older art of purely vocal polyphony. By way of example he dispensed with a full continuo accompaniment in this richly textured six-voice setting of the prophecy of the Messiah’s coming, any ‘ad libitum’ instruments employed merely doubling the voices. Treating the upper and lower voices as distinct choirs, Schütz carefully calibrates the music’s pulse to the lengths and stresses of the German language.

Another short six-voice motet with ‘ad libitum’ continuo, Das Wort ward Fleisch (‘The Word was made flesh’) is even more vividly expressive in its text-setting than Ein Kind ist uns geboren. The opening phrase, with its sustained notes and intense harmonies building to a resplendent D major cadence, dramatically depicts the incarnation of God’s son. In the second phrase, ‘und wohnet unter uns’ (‘and lives among us’), Schütz uses shorter note values and livelier rhythms to suggest Christ’s presence on Earth in human form. A host of other subtle touches, such as the rising-scale figure that repeatedly underlines the word ‘Herrlichkeit’ (‘glory’), constitute a kind of musical commentary on the words from the Gospel of John.

Schütz’s Latin Magnificat was probably composed around the same time as the Christmas story and is scored with similar opulence: four soloists (the so-called coro favorito, or select choir) are combined with two four-voice choruses, two violins, three trombones (or sackbuts) and continuo. Divided into short, clearly defined sections that correspond to segments of the text, the music illustrates Schütz’s ingenuity of matching the words to sundry combinations of voices and instruments. In the brightly declamatory opening chorus, for example, the solo tenor calls out each phrase in advance of the other singers. This section leads, somewhat unexpectedly, to a wordless trombone trio in imitative counterpoint, followed by a light-textured duet for soprano and tenor with continuo accompaniment (‘Et exsultavit’ [‘And rejoices’]) and a brief dialogue between the solo bass and violins (‘Quia respexit’ [‘For he has regarded’]). The bass’s sturdily triadic melody morphs into the nimbly overlapping choral phrases of ‘ecce enim’ (‘for behold’), which in turn flower into the full-throated sonorities of ‘omnes generationes’ (‘all generations’).

After a melismatic section for the solo voices Schütz treats us to a classic example of Baroque word-painting in the fast flurry of sibilants that erupts on the words ‘dispersit superbos’ (‘he has scattered the proud’). The contrast between this animated outburst and the strenuously falling and rising lines of the ensuing section, ‘Deposuit potentes … et exaltavit humiles’ (‘He has put down the mighty … and has exalted the humble and meek’), could hardly be more dramatically apposite. Elsewhere in the Magnificat, the antiphonal effects created by the interplay between the two choirs evoke the sumptuous polychoral music that Schütz’s teacher Gabrieli composed for St Mark’s Cathedral in Venice. As the work approaches its majestic climax, Schütz marshals all his forces for the ‘Gloria’, and his stirring canticle of praise ends with a setting of the text ‘Sicut erat in principio’ that neatly recalls the music ‘As it was in the beginning’.

A quasi-dramatic retelling of the nativity story, Schütz’s Historia der Geburt Christi (or Christmas story as it is sometimes called in English) was designed to be performed as part of the Vespers service in Dresden on Christmas Day. ‘The birth of Christ in recitative style’ was the court diarist’s laconic description in an entry dated 25 December 1660. Schütz’s use of Italian-style operatic recitative for the Evangelist’s narration marked a departure from the chant-like recitation that had characterized his Resurrection history of 1623. The composer took pains to highlight this avant-garde feature of the Christmas story; when the score was partially published in 1664, he boasted that he had introduced a ‘new manner of composition which, as far as is known, has never hitherto appeared in print in Germany’. The influence of Gabrieli and Monteverdi, both of whom Schütz met on a second trip to Italy in the late 1620s, can also be heard in the work’s Italianate vocal lines and occasional flights of operatic coloratura.

Structurally the Christmas story consists of eight tableaux, or ‘intermedia’, for solo voices and/or chorus with instrumental accompaniment, alternating with sparser continuo recitatives for the tenor Evangelist. Elector Johann Georg II, who commissioned the work, maintained a chapel of some fifty singers and instrumentalists, and Schütz deployed it to full advantage: his score calls for no fewer than twelve voices and a large orchestra of strings (modern violins and violas, as well as members of the older-fashioned viol family), recorders, trumpets, trombones, bassoon (or dulcian) and organ. In keeping with traditional associations, the shepherds are accompanied by ‘pastoral’ recorders, the angel by ethereal violettas (treble viols), King Herod by ‘regal’ trumpets (or cornetts), and the high priests by mellow trombones (or sackbuts). The popular appeal of the Christmas story is enhanced by such artful effects as the repeating two-note bass figure in the angel’s three intermedia, which according to Schütz depicts the ‘rocking of the Christ child’s cradle’.