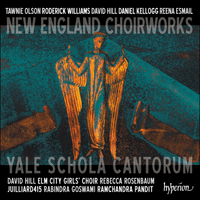 With a spectacular vocal contribution from the Elm City Girls’ Choir (we defy you to resist an immediate encore), and compositions by Roderick Williams and David Hill himself among others, Yale Schola Cantorum’s exuberant celebration of contemporary choral music with a New England twist is certain to win new friends for this repertoire.

‘Startlingly effective singing in the Bulgarian style from the Elm City Girls’ Choir teamed with Yale Schola Cantorum … superbly sung and recorded, and so’s the premiere of Roderick Williams’s A New England Symphony which comes after it, a moving choral meditation on texts born out of slavery, emigration and regeneration’ (BBC Record Review)
‘David Hill has devised a most interesting and varied programme for this CD and his highly accomplished choir sings it with tremendous skill. The recordings were made at a variety of time and locations yet the sound quality is consistently good. Hyperion have lived up to their usual standards in respect of the documentation with each composer providing a valuable note on his or her piece’ (MusicWeb International)» More

Olson Magnificat
Our culture tends to devalue teenage girls’ strength, character and intelligence (the phrase ‘like a teenage girl’, for example, is seldom used as a compliment). Similarly, portrayals of Mary in art and music often downplay her courage and determination and instead emphasize her more ‘feminine’ qualities. This Magnificat offers a different view of Mary, and of young women.

This setting pairs the text of the Magnificat (sung here by the Elm City Girls’ Choir, in the style of a Bulgarian women’s chorus) with that of the Ave Maria (sung by Yale Schola Cantorum). The music draws connections between the two: for example, after the girls sing ‘enim ex hoc beatam me dicent omnes generationes’, the adult choir responds with ‘Benedicta tu in mulieribus’. As the girls sing ‘Fecit potentiam in brachio suo: dispersit superbos mente cordis sui’, the adults sing ‘ora pro nobis peccatoribus’.

To Western European and North American ears, the sounds of Bulgarian women’s choruses tend to suggest female strength and determination. For that reason, and because the composer finds this music beautiful and powerful, the girls who sing Mary’s words are instructed to sing in that style.
Tawnie Olson

Williams A New England Symphony
When David Hill and Martin Jean commissioned me to write a substantial sacred work for Yale Schola Cantorum, I was keen to find texts with some geographical and historical relevance both to this Connecticut student choir and to me as an English composer. I was therefore pleased to discover poems by writers who belong to New England and yet have transatlantic history too; Anne Bradstreet was born in Northampton and emigrated with the early Puritans to Massachusetts in her late twenties. Phillis Wheatley was seven when she was taken from North Africa to serve as a slave, and James Pennington was born into a slave family in Maryland. Education saved them both from a life of slavery, and Pennington became the first black man to be admitted to Yale. The Quaker abolitionist John Greenleaf Whittier was born and died in Massachusetts; for us English, he is most fondly remembered for his words to the ever-popular hymn ‘Dear Lord and Father of mankind’.

Having found my texts, I began to think about form, as a twenty-minute unaccompanied piece is quite a challenge to sustain. I was aware that I would need to vary the texture considerably, also allowing me to showcase the vocal talent and musicianship within the choir, and I began to fantasize about some sort of symphonic structure for the work as a whole. However, I soon realized that it was counterproductive to marry an abstract formal concept with the existing shape of each poem and so I reconciled myself to writing each piece with a loose, madrigalian sense of form—one dictated by verse structure and content. The piece deals with the subjects of mankind and humanity, and was written at a time when global news was filled with stories of terrible racial and religious division, violence, unimaginable brutality and a gnawing sense of dread. Perhaps it was ever thus… So it is that the first movement of the piece reflects such a mood in its tortuous harmonies and pained outbursts, as Whittier’s plea from centuries ago for real brotherhood amongst humanity cries ever more desperately. The contrasting slow movement comes in the form of a nocturne as Bradstreet seeks divine inspiration for calm and fulfilment.

The third movement, the scherzo of the ‘symphony’, is something of a reminder of women’s essential place in ‘man’-kind. The lively, three-part upper-voice texture contrasts with something perhaps a little more rough-hewn in the combined lower voices, whose message is still as full of hope and wonder. The final published poem lacks its dedication to a Mr Galloway (about whom there is no record) and his name appears only as ‘G——’; however, the earlier draft I use contains his full name in the text.

The finale is a tour de force for the choir; in multiple parts and at a heady pace, the singers declaim a poem found at the end of Pennington’s book The Fugitive Blacksmith, an account of his flight from slavery and regeneration into American society. The poet is listed only as ‘a friend of the author’; I have selected several of the verses for musical setting. It is sometimes difficult in this cynical age to take hope and inspiration from such words, and yet Pennington’s story expresses the best of the American ideal—a concept the English often have trouble grasping. The youthful performers of the Schola Cantorum of Yale have no such reserve in responding to the words and sentiment, especially of the last verse.
Roderick Williams

Hill God be in my head
The genesis of God be in my head is quite simple: I was in Yale and feeling very saddened by the death of John Scott, who was a very close friend. He was, up to his untimely death, Director of Music at St Thomas’ Church, New York. I saw him after a Prom concert in which I had been involved in London just a few days before he died, suddenly, in August 2015. In December, I wrote God be in my head, which Schola Cantorum recorded in January 2016. It needed to be a short, prayerful homage to a man I deeply admired since we were organ scholars together at St John’s College, Cambridge. It was sung at the memorial Evensong dedicated to his memory at St John’s College on 6 February 2017 by the College Choir, conducted by Andrew Nethsingha.
David Hill

Kellogg Shout joy!
Madeleine L’Engle’s poem Shout joy! bursts with gratitude, energy and whimsy. It offers an unabashed moment of ecstatic worship in the spirit of the joyful Psalms. My setting of this poem seeks to honour L’Engle’s clear and beautiful expression. The pushing and pulling of tempos capture her spontaneous utterances. I am particularly drawn to her refrain of ‘Jah!’, which simplifies the traditional ‘Alleluia!’ into a single syllable shout.
Daniel Kellogg

Esmail This love between us
This love between us is a piece about unity. Its seven movements juxtapose the words of seven major religious traditions of India (Buddhism, Sikhism, Christianity, Zoroastrianism, Hinduism, Jainism, and Sufi Islam), and specifically how each of these traditions approaches the topic of unity, of brotherhood, of being kind to one another. The texts come either straight from canonical religious writings or from poets who write through the lens of their religion. Each text is itself a union: it is set simultaneously in English and in its original language (with the exception of the Christian text, where the Malayalam is a translation), so you can hear the beauty of the original and grasp its meaning through translation. Each movement also contains a unique combination of Indian and Western classical styles, running the continuum from the Christian movement, which is firmly rooted in a Baroque style, to the Zoroastrian movement, which is a Hindustani vilambit bandish. Each of the other movements lives somewhere in between these two musical cultures in their techniques, styles and forms. But even more than uniting musical practices, this piece unites people from two different musical traditions: a sitar and tabla join the choir and Baroque orchestra. Each of the musicians is asked to keep one hand firmly rooted in their own tradition and training, while reaching the other hand outward to greet another musical culture.

This piece is also a union for me. The time I spent studying at both Yale and Juilliard has been the foundation of my career as a Western composer. And my Fulbright year, studying Hindustani music in India, opened my ears and mind to the world of Hindustani classical music. One day in late 2015, after months of pleading with embassies, government officials and agencies, I finally lost the battle for the visa I needed to return to India, simply because my grandfather had moved his family to Pakistan in the 1950s. I have never been more heartbroken in my life. The pain of being from two places is that, wherever you are, you always miss the other place. And somehow, as if in answer to my despair, the very next day I received the email asking me to write this piece—the one recorded here. If it is impossible to be in both places at once, or at all, I have strived every day since then to create this hybrid, united world in my music.

I wrote This love between us during some of the darkest times in our country and in our world. But my mind always returns to the last line of this piece, the words of Rumi, which are repeated like a mantra over affirming phrases from each religion, as they wash over one another: ‘Concentrate on the essence, concentrate on the light.’
Reena Esmail