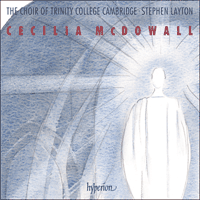 McDowall’s keen sensitivity to text and her flair for writing vocal lines that are grateful to sing are just two of the virtues which justify the success of her choral music. Her original and distinctive voice is well served by Stephen Layton and his Trinity College forces. 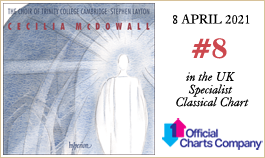 ‘It's a fine recording … really well balanced and with all the choral quality and discipline we've come to expect from Layton and co. Cecilia McDowall couldn't ask for a better showcase for her choral music’ (BBC Record Review)

Born in London in 1951, Cecilia McDowall is a composer whose music ‘constantly tweaks the ear with her range of spicy rhythms and colours, then suddenly produces a highly atmospheric and grippingly expressive interlude which is just as compelling’ (Gramophone). The many prizes she has won include the Choral category of the 2014 British (now Ivors) Composer Award, for Night flight, written to mark the centenary of American aviator Harriet Quimby’s pioneering flight across the English Channel. A recipient of two honorary doctorates, McDowall also received an honorary fellowship award from the Royal School of Church Music for her outstanding contribution to church music.

Often taking inspiration from extra-musical influences, Cecilia McDowall has developed an original and distinctive voice that speaks directly to listeners and performers alike. Her musical language is sufficiently versatile and adaptable to embrace instrumental and chamber pieces, orchestral scores, and works for the stage. She has received important commissions from, among others, the London Mozart Players (Rain, steam and speed, 2006), the City of London Sinfonia and the Scott Polar Research Institute (Seventy degrees below zero, 2012), Dulwich College (Some corner of a foreign field, 2015), the BBC Singers (When time is broke, 2016), The National Children’s Choir of Great Britain (Everyday wonders: The girl from Aleppo, 2018), and Wimbledon Choral Society (Da Vinci Requiem, 2019).

Music for the voice occupies a central position in McDowall’s catalogue, encompassing carols, song cycles, dramatic scenas, cantatas and opera. Her prolific output for choir ranges from intimate anthems and motets to large-scale settings for soloists, chorus and orchestra. Recent works include The angel of the battlefield, which sets words by the poet Seán Street and the founder of the American Red Cross, Clara Barton, in response to the latter’s time as a nurse in the American Civil War, and Pioneers of sound, in whose three movements McDowall sets texts by Tony Silvestri on Edison, Marconi and Hedy Lamarr, the last of whom was the co-inventor of frequency-hopping spread spectrum later incorporated into WiFi and Bluetooth technology. McDowall’s choral music is distinguished by a keen sensitivity to text, and vocal lines that are grateful to sing.

Alma redemptoris mater (2010) is a lilting and joyful six-part motet that combines harmonies and flourishes reminiscent of Renaissance settings of this text with McDowall’s distinctly contemporary voice. It begins with hushed anticipation but soon blossoms into an elegant 6/8 dance, graced with rhythmic embellishments. This was the first piece to be written for The Marian Consort, who commissioned it for the Conwy Classical Music Festival.

Commissioned by Merton College, Oxford, as part of its 750th-anniversary celebrations, O Oriens (2012) is a setting of the fifth of the seven ‘O Antiphons’ for Advent. In the text, Christ is hailed as the morning star, yet McDowall’s shadowy harmonies and often veiled dynamics ensure that the threat of darkness is ever present. The music builds steadily to a climactic, full-throated restatement of ‘O Oriens’, but the final paragraph is a subdued and solemn parting reminder of those who live ‘in the shadow of death’.

Standing as I do before God (2013), for soprano solo and choir, is a setting of Seán Street’s reflection on words spoken by nurse Edith Cavell on the eve of her execution on 12 October 1915. After the German occupation of Brussels in November 1914, Cavell sheltered wounded British, French and Belgian soldiers and helped the Allies to escape to neutral territories. In the following year she was betrayed by an informer and arrested. She was then tried for treason and condemned to death. Recorded by the Anglican chaplain, the Reverend Stirling Graham, her last words were: ‘Patriotism is not enough: I must have no hatred or bitterness towards anyone.’ These words are engraved below her statue, which stands in St Martin’s Place, Trafalgar Square, in London. McDowall’s piece is a sombre lament, which combines solemnity with eloquent intensity. The lonely night spent by Cavell in a German military prison before her execution by firing squad is poignantly evoked in this emotionally committed tribute to an exceptional and compassionate woman.

Setting part of a Eucharistic hymn text by Saint Thomas Aquinas, Adoro te devote (2015) can be used in a liturgical or concert setting. The presence of expressive polyphony, flowing melismatic lines and optional soaring soprano solos (included on this release) suggests affinities with Allegri’s Miserere. Dedicated to the memory of the victims of the Nepalese earthquake in April 2015, Adoro te devote was written for Westminster Cathedral Choir.

The motet God is light (2017) traces a simple and inspiring arc from darkness to light. The opening setting of the eleventh verse of Psalm 139, ‘The darkness is no darkness with thee’, features murky, unsettled harmonies and expressive, imitative writing between the upper and lower voices. There follows a delicate treatment, favouring the upper voices, of ‘Ye are all the children of light’ (1 Thessalonians 5: 5). Between these two settings, McDowall interposes the bright exclamation for sopranos, ‘God is light’, paving the way for the radiance of the extended and increasingly luminous closing setting of ‘God is light, and in him is no darkness at all’ (1 John 1: 5), which climaxes on an exultant, affirmative A major chord. God is light was commissioned by the East Anglia-based Fairhaven Singers, who, together with the Perse Prep School Choir, premiered the work in the Chapel of Queens’ College, Cambridge.

The anthem Love incorruptible (2017) sets words from the Book of Ephesians that embrace themes of love and kindness. The opening directive, ‘Let all bitterness and wrath and anger be put away. Awake!’, establishes a mood of contemplation and yearning. The poised central episode is a rapt response to the words, ‘Be kind, tender-hearted, one to another’, while the final section contrasts the upper voices’ repeated, fanfare-like calls to ‘Awake!’, with the trenchantly rhythmic reiterations of ‘love incorruptible’ in the lower voices. Love incorruptible was commissioned by Sue Young in memory of her husband, Clive Young (1948-2015), Bishop of Dunwich between 1999 and 2013, and was premiered by the Sine Nomine International Touring Choir at the 2017 Presteigne Festival.

Each of the chosen texts for the Three Latin motets (2004) is addressed to the Virgin Mary. The first, Ave regina, for full choir, is a deeply expressive response to the ‘queen of heaven … from whom light for the world has arisen’. The serene opening phrase is alluded to in passages of greater intensity, but its restatement at the end is soft and tender. Ave regina was among the forty-four anthems included in Choirbook for the Queen, a collection commissioned by Prince Charles to commemorate the Queen’s Diamond Jubilee. Ave Maria is the most intimate of the Three Latin motets. Scored for upper voices only, this haunting and gentle supplication to the virgin grows from its plainchant-like beginning, and embraces expressive dissonances and suspensions as it unfolds. The last of McDowall’s Three Latin motets is Regina caeli. This paean of praise to the ‘Queen of heaven’ is a glorious Easter antiphon with dramatic changes of mood and texture. A series of stately, slow-moving choral ‘alleluias’ is juxtaposed with passages of spirited, dance-like material before the closing jubilant chords fade away. The Three Latin motets were commissioned for the City of Canterbury Chamber Choir, who premiered the sacred trilogy under the direction of George Vass at St Mary of Charity Church, Faversham, Kent, in April 2004.

The O Antiphon sequence (2018) for solo organ was conceived as a recital piece, although its individual movements also work in a liturgical context. Based on one of the seven notes of the diatonic scale, each movement is a response to a short extract of liturgical text taken from the ‘O Antiphons’, the Magnificat antiphons used at Vespers during the last seven days of Advent. The set begins with O Sapientia, for which the composer has taken the phrase ‘disposing all things in strength and sweetness’. This antiphon shifts between gentle lyricism and more vigorous material. O Adonai is based on the phrase ‘in the flame of the burning bush’. Spirited and impulsive, it proceeds in sudden, flickering outbursts. By contrast, O Radix Jesse, which draws upon the text ‘to you whom the nations implore’, is lilting and hushed, its undulating phrases unfurling smoothly over a repeated D. O Clavis David (‘what you open none can close’) is a bright and fluent toccata. Allied to McDowall’s choral setting of this antiphon, which also features on this release, the expansive and measured O Oriens (‘come and shine upon those who sit in darkness’) is aptly radiant and develops mainly through a series of veiled block chords. After building to a strong climax, the music withdraws to an introspective conclusion. O Rex gentium (‘the keystone that holds everything together’) is steady and rooted, its florid upper line elaborating freely above a constantly repeated, rising four-note motif. The closing antiphon, O Emmanuel (‘come to save us, O Lord our God’), takes the form of a meditation upon the popular Advent hymn, O come, O come, Emmanuel. It begins with a short, bell-like motif, based on the opening notes of the beautiful ancient melody. This motif makes repeated appearances throughout the movement. Towards the end, McDowall quotes the theme of the hymn outright. The recurring, bell-like motif has the last word, however, leaving the sequence ‘suspended in mid-air’, in the words of the composer. O Antiphon sequence was commissioned by the American Guild of Organists for performance at the 2018 AGO National Convention in Kansas City, Missouri.

The Lord is good (2012), for choir and two soprano soloists, is an expansive setting of verses from the Book of Lamentations. Exotic and declamatory, the soloists’ interlacing lines are vaulted over a rich choral backdrop, with predominantly tonal harmonies spiced with desolate dissonances. Sections of music flowing between soloists and choir have a dramatic impact, but the prevailing character of the piece is one of wistful longing and contrite entreaty.