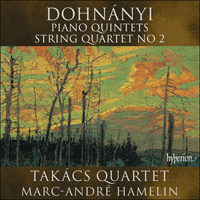 The celebrated partnership of Marc-André Hamelin and the Takács Quartet has already set down reference recordings of piano quintets by Schumann, Franck and Shostakovich, and this latest addition is equally illustrious; an important milestone in the critical re-evaluation of the work of Ernő Dohnányi.

‘In another life Marc-André Hamelin might have made a great political agitator, or even an evangelist. He has an unbeatable ability to convey and inspire belief in the value of the music he is performing, especially when that music is in need of special advocacy … this is an eminently collectable disc, certainly, but not only, for existing Dohnányi aficionados’ (Gramophone)
‘The performance [of Op 26] from Hamelin and the Takács is totally compelling, encapsulating a vast array of colours and textures, from the dark and mysterious opening and the wistfulness of the central Intermezzo to the anguished climaxes of the Finale … a treasurable disc’ (BBC Music Magazine)» More

‘This time it’s no less a dream combination than the Takács Quartet with Marc-André Hamelin on piano who feature Dohnányi’s two piano quartets and his second string quartet … these are piano quintets you wouldn’t want to miss, performed with vivacity and verve by performers who appear to understand the music fully … the disc itself is very well recorded’ (MusicWeb International)» More
‘The performances here are superior, and the disc is full to almost overflowing. The production values are first class, as usual for Hyperion … if you haven’t made the acquaintance of these sadly underappreciated works, this is your invitation to hear them in performances that surely won’t be bettered’ (MusicWeb International)» More
‘If any CD can make you an instant fan of this Hungarian composer, this is it. If you love Brahms, it is likely you will adore this music … a gem of a recording’ (The Arts Fuse, USA)» More
'Briljant is eigenlijk het sleutelwoord van deze fantastisch klinkende cd die in geen enkele collectie mag ontbreken … duidelijke zaak: als het gaat om het op de kaart zetten van de romantiek van rond 1900 zijn het Takács Quartet en Marc-André Hamelin niet te verslaan. Pure magie!' (de Gelderlander, Netherlands)

It is difficult to imagine a more auspicious start to a composer’s career. In July 1895, the seventeen-year-old Ernő Dohnányi was enjoying his summer vacation after his first year at the National Hungarian Royal Academy of Music (now known as the Franz Liszt Academy of Music) when he received a postcard from his composition teacher, Hans Koessler. Koessler was vacationing at Bad Ischl, where his friend Johannes Brahms was also spending the summer. Koessler had shared with Brahms that his prized pupil had written a piano quintet that had been triumphantly premiered during an examination concert at the end of the academic year. Brahms was intrigued, and asked to see the work. Upon reviewing the manuscript, the venerable composer requested a performance. Dohnányi was unable to travel to Bad Ischl, so Brahms had the Kneisel Quartet and Arthur Nikisch play through the quintet. Brahms was so impressed that he reportedly told Koessler: ‘I could not have written it better myself.’ He arranged for a performance in Vienna on 25 November of that year, with the Fitzner Quartet and Dohnányi himself at the piano.

In listening to the Piano Quintet No 1 in C minor, Op 1, it is easy to hear what earned Brahms’s admiration. It is a four-movement work in the great Romantic tradition, showing a mastery of counterpoint and form that far surpasses what one would expect from a student work. The opening allegro movement is a sombre march in sonata form, with expansive melodies and a coda that presents the main theme in C major instead of the C minor in which it was initially presented. The second movement is a lively scherzo, full of the humour that would become a hallmark of Dohnányi’s brilliant compositional style. The ternary-form third movement, marked ‘Adagio, quasi andante’, is evocative of Schumann in the lyrical beauty of its melodies and counter-melodies. The allegro animato finale is a sonata-rondo in a playfully asymmetric 5/4 metre. Near the end of the movement Dohnányi returns to the main theme from the first movement, rendered once more in C major, to bring his first masterwork to a jubilant conclusion.

The same adherence to Romantic musical traditions that earned praise from Brahms also attracted the acrimony of Hungarian modernists who accused Dohnányi of being derivative and even unpatriotic. In a review of the piano quintet’s world premiere on 16 June 1895, the Magyar Hírlap complained: ‘Even today he copies Schumann’s great genius too much.’ After a 13 March 1896 performance of the work by Dohnányi and the Hubay-Popper Quartet, Aurél Kern wrote in the ultra-nationalist newspaper Budapesti Hírlap: ‘Dohnányi is undeniably talented, but his music will only assume an important place in music literature if he is able to establish a certain independence. Our musical culture has no need for Brahms imitators, even if they are very clever.’

Despite these early criticisms, Dohnányi’s compositional output would never venture far from the conservative training he was receiving at the National Hungarian Royal Academy of Music, which at that time was so closely aligned with German musical culture that many of its faculty, including Koessler, barely even spoke Hungarian. Later in his life, Dohnányi would compose several paraphrases of Hungarian folk songs, but he would never show any interest in undertaking the sort of ethnomusicological studies that his classmate and friend Béla Bartók would conduct in search of an identifiably Hungarian style of composition. Instead Dohnányi assumed that his nationality would speak for itself, saying thus: ‘My themes are all original, and when people find that their style is Hungarian, it is because I am Hungarian.’

Dohnányi received artist diplomas in both piano and composition from the National Hungarian Royal Academy of Music in 1897. After graduating he spent the summer studying piano with the legendary pianist Eugen d’Albert, who at the end of five weeks remarked: ‘You can continue by yourself now. I have taught you all I can.’ Dohnányi spent the next eight years establishing himself as one of the greatest pianists of his generation by performing concertos, chamber music and solo pieces all over the world. He also continued to compose works for himself and others to perform, including the String Quartet in A major, Op 7, and his beloved Serenade for string trio, Op 10.

In 1905, Dohnányi accepted a professorship at the prestigious Hochschule für Musik in Berlin, at the invitation of Brahms’s long-time collaborator Joseph Joachim. In the next year, Dohnányi composed his String Quartet No 2 in D flat major, Op 15. While Dohnányi had adopted the standard four-movement structure for his first string quartet, his second quartet employs a three-movement plan that suggests that the conservative composer was not entirely immune to the progressive experiments of his contemporaries. The first movement is in the traditional sonata form, but with a slow introduction that acts as a ritornello by returning at major structural points throughout the movement. The second movement initially presents itself as a menacing scherzo, but comes with a middle section that is not a trio but a tranquil chorale. The third movement is in ternary form, with a molto adagio hymn framing an agitated animato that brings back the ritornello from the first movement. The coda concludes the entire string quartet by quoting themes from all three movements.

By 1914, Dohnányi was at the height of his fame as both a pianist and a composer. It was in that February that he completed and premiered his Variations on a nursery song, Op 25, which would become his most enduring contribution to the repertoire. Shortly afterwards Dohnányi composed one of the most sophisticated works in his entire oeuvre, his Piano Quintet No 2 in E flat minor, Op 26. He premiered the quintet in Berlin on 12 November 1914, with the Klingler Quartet—the same ensemble that had premiered his second string quartet seven years earlier. The moody first movement is once again in the time-honoured construct of sonata form. In keeping with Dohnányi’s penchant for organic unity, the intervals in the opening theme—specifically the semitone between the second and third pitches—provide the melodic building blocks for not just the rest of the movement, but the entire work. In the intermezzo second movement, the semitone forms the basis of a Brahmsian scherzo that is sent through a series of variations that include a quotation of the contemplative second theme from the first movement. A semitone also initiates a fugue at the beginning of the third and final movement, the end of which features the triumphant return of the opening theme from the first movement. Just as with the first piano quintet, the tonality of the opening theme is altered to conclude the entire work in a euphoric E flat major.

After 1915, when Dohnányi returned to Hungary and started accepting leadership positions in his homeland’s most important musical institutions, the friction between his Brahmsian orientation and that of his modernist compatriots intensified. As the premier pianist in Hungary, the conductor of the Budapest Philharmonic, the director of the Liszt Academy, and the music director of the Hungarian Radio, Dohnányi regularly programmed the compositions of promising young Hungarian composers. As a pianist he actively promoted the works of Bartók, perhaps most conspicuously with a 17 October 1917 piano recital that included a block of ten Bartók works. During his twenty-five years as conductor of the Budapest Philharmonic, Dohnányi was responsible for the premieres of a total of eighty-nine new works by thirty-seven Hungarian composers, including fifteen works by Bartók, eight by Zoltán Kodály, six each by György Kósa and Jenő Hubay, and four compositions by Leó Weiner. Nevertheless a number of modernist Hungarian composers whose works Dohnányi regularly refused to programme because he deemed them to be substandard grew increasingly jealous of his strong influence on Hungarian musical life and openly criticized him for obstructing their careers.

When Dohnányi fled his war-torn homeland in 1944, a group of resentful musicians launched a campaign to ensure that he never returned to reclaim his throne as Hungary’s ‘musical pope’. Among the accusations made against Dohnányi was the now discredited claim that he had collaborated with the fascist Hungarian government to undermine their positions and those of other progressives, including Bartók. They also pointed to Dohnányi’s Brahmsian compositional style as evidence of a supposedly anti-Hungarian allegiance to German culture. An article in the Hungarian-American newspaper Az Ember, for example, condemned Dohnányi because ‘he was educated according to the German culture … his musical culture was German. He developed a style reminiscent of Schumann and Brahms, and was only slightly different from them.’

Dohnányi’s devotion to the musical traditions he inherited from Koessler and Brahms would influence the reception of his music for decades to come. In a century that embraced experimental elements of all kinds in musical composition, criticisms of his music as being antiquated eventually became part of the accepted narrative, and the majority of Dohnányi’s works went largely ignored. Recent developments, however, point toward a critical re-evaluation of twentieth-century styles that, like Dohnányi’s, are built directly on the late-Romantic compositional tradition. From this process a new consensus is emerging that recognizes in Dohnányi’s works not only an undeniable Brahmsian influence but also the composer’s own exuberant and distinctive voice. Knowing Brahms’s eagerness to support genuine compositional talent beyond mere ‘Brahms imitators’, this development would seem to vindicate, at long last, his enthusiasm about the composer whose piano quintet he so enjoyed in 1895.