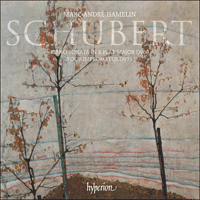 The heavenly lengths of Schubert’s last piano sonata and second set of impromptus: Marc-André Hamelin captures the other-worldliness of these sublime, quintessentially ‘late’ works as do few other pianists. 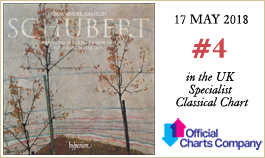 ‘The way Hamelin weights the repeated notes and spins the phrases; the subtle rubato; the rounded timbre he coaxes from the piano; the carefully graded dynamics and slightly ominous soft trills that interrupt the calm—if you warm to this as I have then you'll want to hear the rest of the performance … the second set of Impromptus is a major bonus’ (BBC Record Review)
‘Does it matter that many others have also recorded [D960] and others are waiting to record it in the future? I don’t think so, because the music is there to be played and this recording will enter the great catalogue of Schubert recordings to give pleasure to listeners … there’s an eloquence and sensitivity in Hamelin’s approach to this music which is satisfying and committed’ (The Cross-Eyed Pianist)
‘Hamelin is in complete control of direction and his is a compelling and thought-provoking view of this large-scale work … there are some wonderfully expressive flexibilities and dynamic contrasts to be heard—from bittersweet resignation to powerful stoicism … his technique may be luxurious but it serves only his insightful and individual musicianship … this release has strong claims on the Schubert collector’ (Classical Source)» More

By the summer of 1828 Schubert’s precarious health had deteriorated to the point where he was frequently plagued by headaches, giddiness and attacks of nausea. Yet he not only kept up a more-or-less active social life but continued to work at a feverish rate, almost as if he sensed that time was running out. In September—a mensis mirabilis if ever there was one—he completed four visionary masterpieces that crowned his work as a composer of instrumental music: the C major string quintet (D956), and three piano sonatas (D958, D959 and D960) which he intended to publish as a set with a dedication to the famous composer-virtuoso Johann Nepomuk Hummel. When Diabelli finally published the sonatas in 1839, Hummel was dead. Instead Diabelli dedicated them to a new champion of Schubert’s music, Robert Schumann.

‘Who can do anything after Beethoven?’, Schubert asked, rhetorically, in a letter to his friend Josef von Spaun. Beethoven’s mighty example was indeed both an inspiration and a creative obstacle for any composer in Vienna in the 1820s. Yet the great series of instrumental works Schubert produced after the master’s death in March 1827 suggests that the outwardly self-effacing former schoolteacher was eager to establish himself as Beethoven’s successor. This notion rings especially true in the case of the C minor and A major sonatas from the trilogy completed in September 1828, just two months before Schubert’s premature death. In the final piano sonata in B flat major, D960, the Beethovenian influence is at best oblique: a distant recollection of the ‘Archduke’ trio, perhaps, in the serene opening theme; and, in the way the finale approaches B flat via C minor, an echo of Beethoven’s last work, the rondo he wrote to replace the Grosse Fuge in his B flat quartet, Op 130. Yet in spirit the sonata is utterly un-Beethovenian. The profound contemplative ecstasy of the first two movements is, with the G major sonata, D894, and parts of the string quintet, the consummation of a quintessential Schubertian experience first glimpsed in his 1815 setting of Goethe’s ‘Wandrers Nachtlied’, D224.

The B flat sonata has acquired an aura of otherworldliness, as if Schubert were already communicating from beyond the grave. Yet we should be wary of reading it, or its two companions, as a protracted farewell. While Schubert realized that he was unlikely to make old bones, he had no inkling until his final illness that the autumn of 1828 would be his last. There is pathos, and a sense of evanescence, in the sonata but also (in the last two movements) exuberance, humour and a sheer zest for life.

The soft, deep trill on a dissonant G flat that intrudes on the sublime calm of the opening immediately illustrates a crucial difference between Beethoven’s and Schubert’s methods. Where Beethoven would have integrated the trill into the music’s argument, for Schubert it remains something ‘other’: remote, mysterious, an extreme contrast in sonority and register with everything that surrounds it. Only once, in the transition from exposition to development (heard only if the exposition is repeated, as in Marc-André Hamelin’s performance), does the trill erupt in fortissimo violence. But while the trill’s function remains essentially colouristic, like a distant timpani roll, the note G flat does prefigure an important tonal area in the movement: in the leisurely expansion of the main theme that follows the opening statement, and in the F sharp minor theme (F sharp being the enharmonic equivalent of G flat) in the piano’s tenor register that opens the second group.

Like the exposition, the development unfolds with infinite spaciousness. After building to a fortissimo climax—a hint, perhaps, of human anguish in this quietest and most inward of sonata movements—the music hovers hauntingly around D minor, with the opening bars of the main theme, in hushed preparation for the recapitulation. In this context the theme’s momentary appearance, ppp, in a chromatically shadowed B flat has an effect of luminous strangeness, as if the home key is distantly glimpsed through a gauze.

The mood of ethereal tranquillity deepens in the andante sostenuto, a nocturnal barcarolle in C sharp minor. As so often in Schubert’s piano music, the texture of the opening theme suggests string chamber music, above all the famous adagio of the string quintet: it is not hard to imagine a second violin and viola intoning the floating, almost becalmed melody against delicate pizzicatos from the other strings. In the hymnic central episode, set in the warmly contrasting key of A major, the rich texture evokes a trio or quartet of cellos. When the main theme returns it acquires a new murmuring accompanying figure deep in the bass. Before the coda finally resolves into C sharp major, Schubert conjures another of his unearthly visions with a deflection to the fathomlessly remote key of C major.

With its nonchalant shifts of register and delicious harmonic sideslips, the scherzo forms a mercurial interlude between the timeless contemplation of the andante and the more corporeal world of the finale. The minor-keyed trio, with its lumpen off-beat bass, sounds like a skewed, cussed Ländler.

Launched by a held octave G, the rondo finale begins with a Hungarian-tinged dance tune which feints at C minor before resolving into the ‘proper’ key of B flat. In another of Schubert’s gloriously leisurely structures there are several memorable themes, including a gliding cantabile over a rippling accompaniment, and a mock-heroic F minor outburst that dissolves into a skittish dance. Only at the very end is the main theme’s ambiguity resolved, with the octave G slipping to G flat and then to F, before the brilliant, quasi-orchestral send-off. Though he could hardly have known that this would be virtually his last instrumental work, Schubert, like Beethoven in the Op 130 finale, bows out with mingled robustness, lyrical tenderness, and wry, quizzical grace.

Despite the examples of Beethoven and Schubert, by the 1820s the piano sonata was being eclipsed by the ‘characteristic’ keyboard piece, readily saleable in the lucrative amateur domestic market. The most famous examples of this trend are Beethoven’s late bagatelles and the impromptus and Moments musicaux that Schubert produced in the last few years of his life. The Bohemian composer Jan Voríšek had coined the term ‘impromptu’—with its associations of relaxed spontaneity—for a set of piano pieces published in Vienna in 1822. Capitalizing on their popularity, the publisher Tobias Haslinger borrowed the title for the four piano pieces (D899) Schubert composed during the summer of 1827 (though in the event he only published the first two). Schubert followed these up with four more impromptus in December, shortly after completing Winterreise. On the whole these are more popular in tone than D899, but the technical difficulty of the first and (especially) last pieces in the new set put them beyond the reach of most amateurs. No publisher offered for them during the remaining year of Schubert’s life, and it was only after Robert Schumann had taken up the cause a decade later that they finally appeared in print, as Op 142.

The sequence of movements in the Four Impromptus, D935, with two substantial pieces in F minor framing a quasi-minuet in A flat and a slow(ish) set of variations in B flat, led Schumann to suppose, wrongly, that they formed a piano sonata. True, No 1 does suggest the outline of sonata form, with a stern, compact opening theme and a gentler contrasting idea that finds its lyrical fulfilment in the assuaging second theme. But the central section is more a fantasia than a true development: a calm, almost hypnotic dialogue between treble and bass that unfolds with infinite leisure, first in A flat minor and then (after some typically Schubertian harmonic sleights of hand) in A flat major. This episode returns as an extended coda, before the opening theme has the last word.

The second impromptu is Schubert at his most tender and intimate: a wistful dance in A flat (a favourite Schubertian key), somewhere between a Classical minuet and a Romantic intermezzo. Could Schubert here have been thinking of the third movement, in the same key, of Beethoven’s piano trio, Op 70 No 2? In the D flat major trio, a shadowy outline of melody emerges from the swirling triplet figuration—a magical, echt-Romantic texture.

Next comes a set of five variations on the charming, gemütlich theme that Schubert had already used in his Rosamunde incidental music and the A minor string quartet, D804. At the movement’s centre the third variation, in B flat minor, suggests a tragic operatic scena. The fourth variation, in a soft, veiled G flat, reduces the tune to its harmonic skeleton; the fifth then reasserts the home key of B flat with frolicking triplets. Finally the ambling tune is transfigured in the più lento coda, with its deep, rich keyboard textures and nostalgic chromatic harmonies.

The fourth impromptu, again in F minor, is in effect a scherzo and trio. There is a distinct whiff of the Hungarian puszta in this brilliant, spicily humorous piece, with its disruptive cross-rhythms (duple versus triple time) and riotous, dissonant trills. The middle section, by turns delicate and vehement, moves between A flat major/minor and a far-flung A major, and builds to a climax in a wild flurry of scales. Then, just as the reprise of the main section seems imminent, Schubert keeps us guessing as to the exact moment of return with teasing pauses à la Haydn and Beethoven.