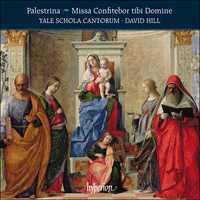 A journey from twenty-first-century Connecticut to late sixteenth-century Rome: Yale Schola Cantorum presents a programme of quasi-Baroque richness in which Palestrina’s a cappella Mass is imaginatively interspersed with instrumental interludes for cornett and organ.

‘David Hill produces a marvellous sound from his choir, beautifully tuned, beautifully balanced and with many truly exciting moments. Bruce Dickie is a totally authoritative player for the two Bassano pieces and two further Palestrina pieces; and Liuwe Tamminga plays with equal authority. These tracks are an unalloyed pleasure.’ (Gramophone)
‘Under the masterly direction of David Hill, this crack student choir produces a clean yet luxuriant sound, reflecting the sumptuous vocal resources that might have been used on a major feast day in one of the Roman churches. The sacred acoustic, slightly distant placement of the microphones and seraphic high voices all combine to create an ethereal effect … the instrumental playing is both stylish and, at times, virtuosic—notably Bruce Dickey’s floridly improvised ornamentation and dazzling agility’ (BBC Music Magazine)

Taking his surname from the town of Palestrina where he was probably born in 1525, Giovanni Pierluigi trained as a choirboy at St Mary Major in Rome. After a period as organist in Palestrina he was appointed magister cantorum at St Peter’s in 1551. Four years later he spent a short time as a member of the papal choir before Pope Paul IV enforced a rule excluding married men and dismissed Palestrina and two other singers, though with a lifetime pension. He subsequently took charge of the music at St John Lateran and, after a disagreement with the canons there, moved to St Mary Major in 1561. Between 1567 and 1571 he divided his time between the newly opened Roman Seminary and service to Cardinal Ippolito II d’Este. Then, in 1571, he returned to St Peter’s as maestro, remaining there until his death in 1594. In 1572, shortly after that return, Palestrina published his Motettorum liber secundus, 5, 6, 8vv, which included four pieces for eight voices, one of which was Confitebor tibi Domine. The range of musical styles in the print reflected both his varied employments and the changes which resulted from discussions about the appropriateness of contemporary church music at the time of the Council of Trent (which had concluded in 1563). These changes gave greater prominence to the words and their intelligibility to the listener.

While ostensibly composed for two equal groups of four singers, Confitebor tibi is not written for two physically separated choirs. The two groups are not used consistently but voices are gathered into continuously varied combinations. Full tuttis are rare, largely confined to the end of each of the motet’s two halves. The texture is mainly chordal, broken up by scales and other figures. These techniques expand on those used in Palestrina’s six-voice Missa Papae Marcelli, which became the classic model for combining musical interest with clarity of word-setting. The end of the second part of Confitebor tibi is particularly appealing, with the word ‘Exsulta’ (‘Rejoice’) highlighted by long roulades in all parts, followed by some beautiful antiphonal dialogue on ‘Sanctus Israel’ (‘the Holy One of Israel’) before a final sonorous tutti rounds off the piece. The text, chapter 12 of the Book of Isaiah, is essentially a psalm of praise in two sections interposed into the prophetic text. It has the usual structure of a psalm: a series of short verses divided in the middle, with each half-verse complementing the meaning of the other half.

Some years later Palestrina based a Mass setting on this motet, a common practice at the time. The Missa Confitebor tibi Domine was copied into one of the papal choir’s manuscript choirbooks in about 1577 (when Palestrina was its official composer) and was subsequently published in 1585. The Mass is composed for two separate choirs—called ‘cori spezzati’ in Italian—with a clear division into two equal groups and with both bass parts avoiding the fifth of the harmony, necessary if the choirs are to be physically separated. In the Sistine Chapel, however, such division was not possible since the singers occupied a single ‘cantoria’ on the right-hand wall, but plans for publication would have led Palestrina to write it in the increasingly popular polychoral style for choirs placed on separate platforms or galleries. Like other so-called parody or imitation Masses, the six movements re-mix musical material from the motet, adapting it to the new words and adding new material where necessary. The opening of the motet is used for the beginning of all the major sections of the Mass, and for most of its sub-sections, while its end is used for the final bars of the Gloria, Credo and Agnus Dei. The scales used to highlight the word ‘Exsulta’ in the motet are put to good use in the final Kyrie and at a number of points in the Credo and Sanctus. Both of these movements have extended sections for four voices.

Palestrina’s Magnificat primi toni for eight voices was also copied into a large choirbook for the papal choir, probably in the late 1580s. Not intended for publication, it is not written for spatially separated choirs: though there is now more consistency in the division, some sections combine voices from across the two choirs. Tutti writing is again scarce, confined to the words ‘omnes generationes’ (‘all generations’) and to the end of the piece; most verses see the two groups alternating, using a largely chordal texture enlivened by scales and other figuration. This frequent exchange is marked by regular cadences which give a tonal G minor feeling to the music which is notated, like Confitebor tibi and the Mass, in the first (Dorian) mode transposed up a fourth to G. The text of the Magnificat, taken from Luke’s Gospel, speaks of Mary’s happiness in accepting her role as mother of the Saviour, while also stressing her Son’s mission to the poor. Palestrina reduces his forces to a quartet of two sopranos, alto and tenor for the key phrase ‘Quia fecit mihi magna qui potens est: et sanctum nomen eius’ (‘For he that is mighty has done wondrous things for me: and holy is his name’), making particularly effective use of two intertwining sopranos. He uses just the six lower voices for the next phrase, ‘Et misericordia eius a progenie in progenies timentibus eum’ (‘And his mercy is upon them that fear him throughout all generations’), before returning to eight voices for the remainder of the setting.

Palestrina’s motets were published in separate partbooks, one for each voice part. This did not mean that they were only performed like that, with one or more unaccompanied singers on each part: in the liturgy they could be accompanied, or substituted, by organ and by instruments like the cornett and sackbutt. Motets also had a use outside of the liturgy, sung for entertainment which might be devotional or not. In that context the words could be dispensed with entirely, with one or more parts played on solo instruments and accompanied by organ, harpsichord, lute or theorbo. The Venetian virtuoso cornett player and composer Giovanni Bassano came from a family of wind players employed in both Venice and London. In 1591 he published a volume of arrangements of motets, madrigals and canzonas by various composers, with his own embellishments for a variety of instruments or sung as ornamented solos. Two of these, Palestrina’s Benedicta sit sancta Trinitas and Introduxit me rex, are performed here by cornett and organ. In both, the top line is played in a decorated fashion by the cornett while the other parts are played on the organ. Bassano’s ornaments are generally formulaic and invite further improvised ornamentation as here. Bruce Dickey has made his own arrangement for cornett and organ of another Palestrina motet, Loquebantur variis linguis, for this recording.

Motets could also be played on the organ without singers or instrumentalists, in which case they became studies in counterpoint, each successive phrase exploiting a musical motif which, though originally conceived to match a phrase of text, could also function on its own. This was the basis for the Italian instrumental ricercar made up of a series of imitative workings of themes, called points of imitation. Eight such ricercari are attributed to Palestrina in a late-sixteenth-century Roman manuscript, one in each of the church modes. They appear with a large number of scored-up motets by him and a host of his contemporaries; the manuscript is thought to have been compiled by a Roman organist for his own use. Ricercari could be played during Mass, particularly during the Offertory, or in other liturgical contexts. Their attribution to Palestrina cannot be verified but he did play the organ and, if he had composed such pieces, they would certainly have been in this style. The two performed here are in the fifth and sixth modes, both Lydian, using the white-note scale starting and finishing on F; in practice the B natural was often replaced by a B flat to avoid the prominent tritone, so that they sound more like our modern major scale. The difference between the two ‘tuoni’ is that the ‘quinto’ exploits a higher range than the ‘sesto’. The former is played by cornett and organ here, the cornett taking the top voice with the other three being played on the organ; the Ricercar del sesto tuono is played on organ only.

The music on this recording represents the repertory performed at St Peter’s, or in other Roman churches, in the late 1570s or 1580s, during the celebration of Mass and Vespers on a patronal feast day. On such occasions extra singers (if necessary) and instrumentalists were brought in to attract and impress crowds of people and to fill the large central spaces of the new early-baroque churches then being erected throughout the city. Much of this music displays the more richly sonorous and proto-baroque side of Palestrina’s style, often overlooked due to his received image as a relatively austere composer with a particular skill in counterpoint. As we can hear, that skill was certainly there, but so too was a marvellous ear for musical architecture and a strong commitment to matching the music to the text.