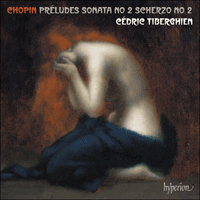 Préludes, Piano Sonata No 2 & Scherzo No 2

Repertoire which has been central to the lives of most pianists for over a hundred and fifty years will always present a formidable challenge; happily, Cédric Tiberghien’s account of some of Chopin’s greatest and most popular works need fear nothing by way of comparison to the famous recordings of the past.

‘A Chopin player of real class … Tiberghien’s Second Sonata is impressive … the final two movements are particularly fine … this disc as a whole is a potent new addition to the Chopin library’ (Gramophone)
‘It’s the clarity of touch, and the honed rendering of Chopin’s bustling textures, which make Tiberghien’s Préludes worth the time … the final work, the B Flat Minor Scherzo Op 31, is a perfect summation of the whole program: lyricism, drama, frenzy, and charm, which Tiberghien carries off with elegance and consummate artistry’ (Limelight, Australia)» More

‘In an age awash with soulless automata masquerading as pianists, violinists and the like, it is always a pleasure to listen to Cédric Tiberghien … the recital ends with a wonderfully quixotic account of the Op 31 Scherzo that Moriz Rosenthal would surely have been at ease with, which is all you can ask for’ (Audiophile)

‘The final Preludes also stand out, especially in No 21, where Tiberghien runs the emotional gamut, evoking memories of Alfred Cortot in his prime … Tiberghien’s Op 28 thoroughly holds its own alongside readings by other like-minded individualists’ (Classics Today)» More

Anton Rubinstein called them the pearls of Chopin’s work. Robert Schumann, though bemused by their form (‘ruins, eagles’ feathers, all wildly, variegatedly intermingled’), recognized ‘even in his pauses’ that each one of them said unmistakably ‘this is by Frederic Chopin’. The critic James Huneker declared that the 24 Préludes, Op 28, alone would make good Chopin’s claim to immortality: ‘Such range, such vision, such humanity! … If all Chopin, all music, were to be destroyed I should plead for the preludes.’

These views expressed in the nineteenth century apply no less keenly today, for which other collection of music of the same length provides such a range of mood, colour and texture? Many of the preludes last less than a minute; only a couple longer than three minutes, yet as Theodor Kullak said of them, ‘in their aphoristic brevity they are masterpieces of the first rank’.

The use of the title ‘prelude’ for a short, independent keyboard work was not new. In Bach’s time, a prelude usually preceded something else, whether a fugue or a suite of dance movements. By the beginning of the nineteenth century, it had become common practice for pianists to improvise briefly before their performance. ‘Preluding’ was an opportunity to loosen the fingers and focus the mind (a tradition that lasted well into the twentieth century), one which inspired sets of preludes in all the major and minor keys by several leading pianist-composers of the day. These rarely stray beyond the realm of the technical exercise. It was left to Chopin, as was his wont, to raise an existing form to a new level, redefining the term ‘prelude’ and providing a model for later cycles by Alkan, Busoni, Rachmaninov and others.

Chopin had begun writing the set of twenty-four preludes in 1836. Their completion coincided with the beginning of his liaison with the novelist and playwright George Sand. With her former lover threatening a duel, in early November 1838 the new couple thought it wise to leave Paris for a time and spend the winter in Majorca, taking with them Sand’s two children, Maurice and Solange. They travelled separately, Chopin bringing with him some of his treasured volumes of Bach, a supply of manuscript paper and seventeen of the preludes. He had already sold them to the publisher Camille Pleyel for 2,000 francs (a domestic servant’s annual salary was about 500 francs at this time), some of which had been paid in advance to enable Chopin to travel to Majorca.

The French edition of Op 28 would be dedicated by Chopin ‘À Son Ami Pleyel’. The German edition, however, was dedicated to Johann Christoph Kessler (1800–1872), another friend whom he had met in Warsaw as a teenager and with whose set of études (Op 20, dedicated to Hummel) he was thoroughly familiar. Published in 1827 and much celebrated in their day, Kessler’s études (one in every key) were arranged in a cycle of fifths. Seven years later, he dedicated to Chopin his Op 31 set of twenty-four preludes, one in each major and minor key and using the same circle of fifths employed in his études.

Whatever the cross-pollination between these two and other composers (Hummel, for example, employs the same scheme in his Op 67 preludes of 1815, another cycle that Chopin must surely have known), at least four of the remaining seven preludes were written on Majorca, one of which (No 4 in E minor) we know was completed at the end of November in Palma (before the party moved to the monastery at Valldemossa), at the time when Chopin fell seriously ill. It seems likely that the music reflected his innermost feelings, for on the same sheet of paper as the despairing E minor prelude is a sketch of the strange, melancholic A minor prelude (as well as the E minor mazurka which would appear in the Op 41 set).

On 22 January 1839, Chopin wrote to his friend and amanuensis Julian Fontana in Paris that he was sending him the completed preludes with instructions that they be handed over in person to Pleyel. Among these miniature tone poems are some of the most celebrated works of all piano music—let alone Chopin’s œuvre—including the ‘Raindrop’ prelude (No 15 in D flat), No 20 in C minor which inspired two sets of variations by Busoni and one from Rachmaninov, and No 6 in B minor, known to all young pianists, as is the above-mentioned E minor prelude which was played on the organ at Chopin’s funeral by Lefébure-Wély.

Cédric Tiberghien follows these twenty-four miniatures with one of Chopin’s most beloved large-scale works, the Piano Sonata No 2 in B flat minor, Op 35, known universally as the ‘Funeral March’ sonata because of its celebrated third movement. This was in fact the first to be written, its grief-racked tolling surely one of the best known (and certainly most parodied) themes in all classical music. Its origin can be dated precisely, for on 28 November 1837—the eve of the anniversary of the November 1830 uprising in Poland—Chopin copied a fragment of the march into the album of an unidentified friend.

The first of the sonata’s four movements opens with a brief Grave introduction before an agitated first subject marked Doppio movimento (i.e., ‘twice the preceding speed’) and a beautiful, broad, well-contrasted second subject which are repeated—some pianists repeat just this section, others prefer to take the repeat da capo—before a loose development of the themes, a scintillating stretto and brief coda. The second (Scherzo) and fourth (Presto) movements were written in 1839 during the first rapturous summer at Nohant, George Sand’s estate about 180 miles south of Paris, to which Chopin and his lover repaired after their ultimately disastrous sojourn on Majorca. In a letter to Julian Fontana in Paris (8 August 1839), he wrote: ‘I am writing here a Sonata in B flat minor which will contain my March which you already know. There is an Allegro, then a Scherzo in E flat minor, the March and a short Finale—about three pages of my manuscript-paper. The left hand and the right hand gossip in unison after the March.’ (There was also news of a new nocturne and four new mazurkas, all of which indicated, with the full recovery of his physical and mental well-being, a period of heightened creativity.)

Though the ‘Funeral March’ is the most celebrated section of the sonata, the finale is the most discussed. Many people could not understand it. Mendelssohn, when asked his opinion of it, said curtly: ‘Oh, I abhor it.’ Others thought it a masterstroke, a bold and original conception, and the only possible logical outcome of the slow movement. The swirling unison triplet quavers played an octave apart last a mere seventy-five bars, all except the final fortissimo chord marked to be played sotto voce e legato and with the una corda pedal. The virtuoso Carl Tausig, in a letter written just two weeks before his early death in 1871, likened the finale to the wind blowing over his grave. Even more potently, the writer G C Ashton Jonson quoted Dante Gabriel Rossetti’s poem Lovesight:

The ground-whirl of the perished leaves of Hope,
The wind of Death’s imperishable wing?

Not only the key but Chopin’s performance instructions (presto and sotto voce) link the sonata’s last movement to the Scherzo No 2 in B flat minor, Op 31, written (and published) in the same year as the ‘Funeral March’. The scherzo is another form extended and redefined by Chopin. The quartet of independent works he composed with this title between 1831 and 1843 has little to do with the earlier scherzos of Beethoven and Mendelssohn or with the derivation of the word ‘scherzo’ (meaning ‘joke’ or ‘jest’), although Chopin does preserve the A-B-A structure of the minuet and trio, the scherzo’s musical antecedent.

The B flat minor scherzo, the most popular of the four, opens with a striking phrase which has been aptly cited as an instance of scorn in music: a timid question followed by a forceful put-down. Wilhelm von Lenz, who studied the work with Chopin, reported that for the composer, ‘it was never questioning enough, never piano enough, never vaulted (tombé) enough, never important enough’. And on another occasion: ‘It must be a charnel house.’ There follows one of Chopin’s most inspired lyrical themes (in D flat major, as is the majority of the scherzo) before a chorale-like central section. Here the music becomes increasingly agitated before reaching an impassioned climax and a return to the opening subject. The coda is superbly written and conceived, for now the questioning phrase returns in an altered form followed by the answer. But this time the question has been answered—not with scorn but with complete accord, and the two hurtle together towards the scherzo’s triumphant conclusion.